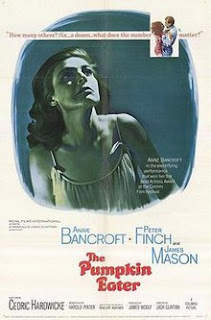 Released in 1964, The Pumpkin Eater was rather unfairly seen as too strongly aping the new-wave of European film-making, in particular Michelangelo Antonioni and Ingmar Bergman. It’s a strange trend in British culture to ruthlessly lambast anything seen to be too good or too well made, as if trying too hard is vulgar and flies in the face of our love for the amateur. This is supremely unfair for The Pumpkin Eater (which I will say is weighed down by a pretty terrible title – Scenes From a Marriage would have been better, but that one got nabbed by Bergman) which is a little classic of a film.

Based on a semi-autobiographical novel by Penelope Mortimer about her marriage to lawyer-turned-writer John Mortimer (creator of Rumpole), Anne Bancroft (with an impeccable British accent) plays Jo Armitage: an intelligent woman, suffering from depression, with a huge number of children from three marriages. Her new husband, Jake (Peter Finch), is a charming man, a hard working screenwriter, an excellent father to all the children – and, alas, a selfish serial adulterer. The film charts the ups and downs of their marriage, often in a non-linear way, including Jo’s battle with depression and the fallout from Jake’s affair with the wife of a film producer Bob Conway (James Mason).

Shot in sumptuous black-and-white, The Pumpkin Eater is so well made by Jack Clayton it became almost a stick to beat it with. One contemporary review even mentioned it was “irritatingly without flaws” in its film-making, as if this was a bad thing! Clayton’s direction is detailed, precise and beautifully done and throws a host of fascinating images at the screen, as well as drawing out some simply superb performances from the cast. Clayton chooses interesting angles and visual mirrors – events from scenes are reflected and repeated, in different contexts, in later scenes. The camera takes up unusual positions, not least a zoom in on James Mason’s mouth as his character spits out vile insinuations.

Clayton’s direction also captures a superb sense of empathy with his characters. His depiction of depression and ennui in Jo Armitage captures the sense of drift beautifully. Early in the film, she is captured in shot aimlessly standing in the shade of a car port. At her lowest she seems to get almost stuck in the frame. The film’s most famous moment features Jo breaking down in despair in Harrods – a wonderful sequence that uses a combination of POV, overhead shots, a camera attached to Anne Bancroft as she works, and a crashing close up on Bancroft’s face (also repeated later in the film) that all serve to stress her isolation, her despair and the mixed to hostile reaction to her tears from the shoppers around her. 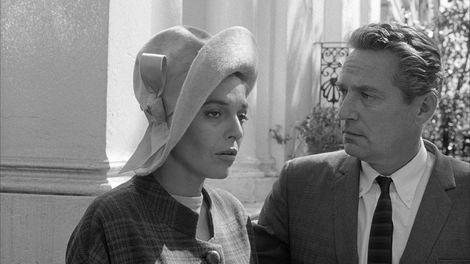 But the film doesn’t solely take Jo’s side. It’s interesting how many contemporary reviewers – men and women – found Jo a tiresome and selfish woman (she’s not, just an unhappy one). That’s partly due to the film’s success in making Jake a fully rounded character. Sure he’s charming and fun, but he’s also clearly a great dad and genuinely cares for Jo – it’s just that he can’t help himself doing things that end up hurting her. The film is also careful to suggest that, deplorable as some of his actions are, he has a point about the pressure of adding another child to a family which already has about seven (two of them at least have been farmed off to boarding schools, and it’s clear in one late sad scene that Jo now hardly knows them). How are they meant to cope? How are they going to be able to support another baby?

The film works as well because both Bancroft and Finch give extraordinary, fully rounded performances in the lead roles. Bancroft had just won the Oscar for Best Actress, and it’s quite something to think that committing to this British picture was her next gig. But she immerses herself in the character, and sells every single one of the complex emotional ups and downs Jo goes through. She’s perfect at drawing us deeply into Jo’s sorrow and uncertainty, but also her brittleness and anger. She’s not afraid to acknowledge that sometimes depressed people are immensely difficult and frustrating – or that they are also intensely vulnerable and fragile. Peter Finch is equally good as a hail-fellow-well-met, whose selfishness doesn’t quite fit into his self-image as a good guy but who is overflowing with good intentions and small moments of kindness.

Both actors are helped immeasurably by a very strong script by Harold Pinter. Pinter’s structure intelligently draws out great depths from the material, as well as playing smart games with structure and timeline that provoke thought. He is the master of the stand-out scene, and the film is crammed with smaller moments that stand out in the memory. Maggie Smith has a brilliant cameo as a shallow, gossipy house guest who may or may not be having an affair with Jake. In one extraordinary sequence, Jo is accosted at a hairdressers by a total stranger (played by Yootha Grace) who recognises her from a magazine article about Jake, who oscillates between wanting to be her friend and vicious bitterness that she isn’t. 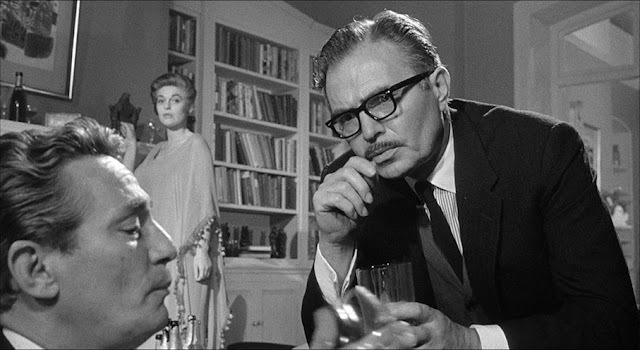 It’s a sign of the gift parts that this film gives to actors. Stand-out amongst the remaining cameos is the great James Mason, whose cuckolded husband at first seems to be a decent, if overly bombastic life-of-the-party type, who reveals himself to have unending reserves of bitterness and poison and delights in pouring anger and suspicion into Jo’s ears.

Clayton and Pinter’s work dovetails perfectly here into a sharply intelligent, haunting film which throws you into a marriage that refuses to paint either side as either completely wrong or completely right (Clayton was even concerned the film may have gone too far in making Jake sympathetic to the detriment of Jo). A compelling storyline, in a beautifully made film crammed with intelligent lines and wonderful moments, The Pumpkin Eater can rightly claim to be an overlooked classic of British cinema.
Email ThisBlogThis!Share to TwitterShare to FacebookShare to Pinterest
Labels: Alan Webb, Anne Bancroft, Biography, Cedric Hardwicke, Eric Porter, Harold Pinter, Jack Clayton, James Mason, Maggie Smith, Peter Finch, Richard Johnson