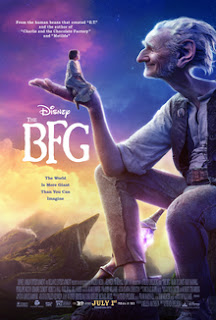 It should be a match made in heaven right? Spielberg, one of the finest connoisseurs of family entertainment in Hollywood, and Roald Dahl, one of the most popular children’s authors of all time. But somewhere along the line, The BFG falls terribly, terribly flat. It’s a film that never really comes to life, that never really entertains or engages the audience until it’s way too late, and is probably something that your regular kid these days is probably going to find (whisper it) a little bit boring. It’s less entertaining, exciting or arguably well-made than the 1980s cartoon version with David Jason voicing the BFG. It doesn’t work.

The story is pretty much unchanged from Dahl. In the early 1980s, Sophie (Ruby Barnhill) is an orphan in a horrible orphanage in London. One night she spots a giant walking the streets of London, Panicked, the giant snatches her and carries her back to Giant Country. There he reveals himself to be a friendly, peaceful, rather sweet fella – the Big Friendly Giant or BFG (Mark Rylance) – but that he lives near a horde of much larger, man-eating monster giants. The BFG spends his days catching dreams and mixing them together, and his nights walking the streets of London giving the happy dreams to children. He and Sophie quickly become firm friends, but she remains at permanent risk of being discovered by the other giants and eaten.

The BFG has a long first act in which not a lot really happens. The first hour of the film is a slow, whimsical, largely plot-free amble through giant country and dream catching that, frankly, stretches on way too long. There is simply no drive to the plot, no impetus. Rather like Hugo, it feels like a children’s film made by someone who doesn’t seem to know what children actually like. Dahl’s book mixed fairy tales, horrible giants and a number of fart gags. This story focuses more on a slow, contemplative bonding between two characters, which seems low on energy and interest.

In fact the whole film – not helped by its John Williams score – feels like an attempt to replicate Harry Potter, with its magic, its extended magic dream trapping sequences, its constant reveals of something wonderful to a wide-eyed child. The problem is that the BFG’s world just isn’t really expansive enough for this approach to work – there isn’t enough magic or stuff to discover to support a constant stream of reveals. Instead, the more the film tries to make of the world of the BFG, the smaller and less epic it feels.

On top of which, there is no sense of drama and peril about it. There is no plot or objectives for either of the characters for the whole of the first half of the film. The threat of the other giants is hinted at, and appears in other places, but the giants never really seem like truly plausible or terrifying antagonists. They are, quite simply, stupid, easily tricked and don’t seem vicious enough. Compared to the dread that the giants in the animated version carried, these seem like cruel but silly buffoons.

It also doesn’t help that the character of Sophie doesn’t come across as hugely engaging. I don’t blame Ruby Barnhill, who does very well, but the character is written a little bit too hard, a bit too grating in her strident certainty and general bossiness. Somehow, she never really seems like a truly engaging child character, more of a bit of a know-it-all. Too many of her lines carry a strident insistence that makes her finally a little irritating as a character.
The film’s main bonus is Mark Rylance’s heartfelt and very sweet work as the BFG. The film’s motion capture of Rylance (and the other giants) is very impressive, but Rylance is more than just a bag of computer tricks. He makes the BFG a truly gentle giant, tender, witty, kind and thoughtful and most of the film’s effective emotional moments come from him.

It also certainly looks handsome, even if its style feels very reminiscent of the Harry Potter series. You can’t fault the technical work on the film. Similarly the second half of the film kicks more into life, with a plan to stop the other man-eating giants by recruiting Queen Elizabeth (Penelope Wilton) to order the military to stop them. This section of the film brings the best jokes as well as finally giving the narrative of the film a bit of a kick. However, for many it will be too little too late for this meandering film and they will have long since given up hope of it springing into life.
Email ThisBlogThis!Share to TwitterShare to FacebookShare to Pinterest
Labels: Fantasy, Jermaine Clement, Mark Rylance, Penelope Wilton, Rafe Spall, Rebecca Hall, Steven Spielberg