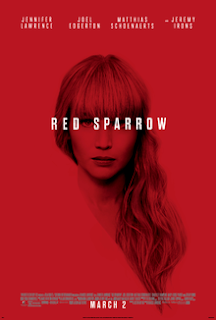 Dominika Egorova (Jennifer Lawrence) is in trouble. After an act of sabotage by her dance partner, her career in ballet is over. Out of options, she is forced into enrolling at the elite FSB Sparrow School by her uncle Ivan (Matthias Schoenaerts). There young men and women are trained, under the tutelage of its controlling Matron (Charlotte Rampling), to sacrifice all their pride and their bodies for the good of Mother Russia. Thrown into the field, Dominika finds herself entangled with the CIA Agent Nate Nash (Joel Edgerton), whom she has been ordered to seduce.

Red Sparrow is a bad film on several levels. Firstly, it’s at heart a trashy espionage movie that confuses being about intelligence with actually being intelligent. A few late twists doesn’t suddenly make this a work of genius. Secondly, its attitude of being about this damn dirty business of spying manages to make it so grim it’s not even fun to watch. Finally, it’s the sort of film that thinks constantly telling us it has a strong female lead at its heart is the same as actually having a strong female lead at its heart.

To take that final point last… Poor Jennifer Lawrence. Surely only the $20million she was paid for this film attracted her to this. I’ll start by saying she feels miscast in a role that requires a ruthlessness and capacity for viciousness that is not a natural part of her range. But this film struggles to make her feel like a character with real agency. During the course of this film, she has her leg broken, nearly gets raped (twice), strips down in front of a group of people (twice), gets smacked in the face, beaten, tortured, stabbed, shot… And a few sudden last minute gear reversals which suggest that she has been playing her own game this whole time don’t shake the impression that the film is wallowing in the torture and violence that runs through the film.

Anyway, the film is reliant on that because it’s not sharp or clever enough to really have anything else in there in its place. So we stumble from violent set piece to violent set piece, while the characters talk incessantly about macguffins and characters we care almost nothing about. The film has an almost impenetrable plot, not because it’s complex, but because it’s poorly explained and impossible to care about. Actors who are way too good for this material – and I mean the whole cast – struggle to put fire and energy into a shaggy dog story that never goes anywhere.

This all serves to make it a dull film. It really should be a guilty pleasure. All the right material is in there. Spy thrillers make for fun films. It’s interesting to have a woman at the centre of it. It’s got good actors. But too many scenes and set pieces veer towards the overly violent and sexual. For a film that is about a silly spy training school turning out honey trap agents, this film seems determined to ram the grimness of spying in our faces at every turn. This makes sense for a high brow Le Carre adaptation. It makes no sense for silly high-concept Jennifer Lawrence star vehicle.

Who really needs to watch poor Jennifer being slapped about and ill-treated for over two hours? Who has the patience for it? Who is going to enjoy it? The film struggles to get across the idea that Dominika is good at this spying game so it needs other characters to say it openly. Its rug pull towards the end lacks all signposting so gives no satisfaction whatsoever. By the time it comes round you’ll have long ceased stop caring about anything in it as well. A tedious, grimy and rather unpleasant film from start to finish that leaves a sour taste in the mouth.
Email ThisBlogThis!Share to TwitterShare to FacebookShare to Pinterest
Labels: Bill Camp, Charlotte Rampling, Ciarán Hinds, Francis Lawrence, Jennifer Lawrence, Jeremy Irons, Joel Edgerton, Joely Richardson, Mary-Louise Parker, Matthias Schoenaerts, Spy thrillers, Terrible Films