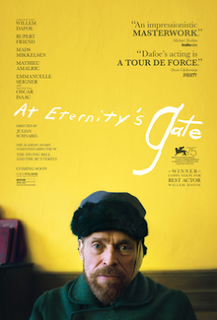 Vincent van Gogh has a constant fascination for film-makers. Perhaps it’s because, as this film suggests, he sat permanently “at eternity’s gate”, painting for those yet to be born. It’s well known van Gogh only found success, fame and artistic recognition after his death. The sad tragedy of his life – he was a deeply troubled man, who struggled profoundly with depression – has been fuel for many films with van Gogh played by actors ranging from Kirk Douglas to Benedict Cumberbatch. Now Willem Dafoe – a very close physical match to the painter (even if he is almost 25 years older than van Gogh at his death) – takes the role on in artist Julian Schnabel’s film.

You’d expect Schnabel, a renowned artist and film-maker, to create a film that offers insight and even revelations on van Gogh and the process of art creation. It’s a shame then that At Eternity’s Gate doesn’t quite succeed in doing this. Schnabel stated in interviews that the existence of the Kirk Douglas/Vincente Minnelli Lust for Life (a far more conventional narrative retelling of van Gogh’s life spliced with melodrama) removed the need for him to worry about telling the clear facts of van Gogh’s life. While I guess it’s true that the basic litany of van Gogh’s final years (which the film focuses on) of Arles-Gauguin row-ear removal-asylum-Gachet-suicide is pretty familiar to many people (and I suspect everyone likely to see this film!), Schnabel’s film drains the drama from this.

Instead Schnabel offers up a film straining at complexity, but which feels rather slight and unsatisfactory. It only seems to scratch the surface of art and the thinking behind van Gogh’s creations. In fact, whenever the film actually tries to talk about art it largely comes across as stodgy and lumpen. Oscar Isaac in particular is saddled with several speeches and dialogue exchanges on art that fall lamely to the floor. Van Gogh gets a few more poetic contributions, but these are few and far between and essentially seem to sum up to a wistful love of nature and the beauty around us.

On top of this, I don’t feel like I get a real understanding or insight in this film into van Gogh’s inner life. In 2011 an episode of Doctor Who written by Richard Curtis made profound and moving material out of Van Gogh’s depression in the episode Vincent and the Doctor. The pain of inner turmoil, the volatility of depression, the way joy can switch to anger and suicidal self-loathing as if a switch has been flicked – it’s all there in that episode. It’s a side of van Gogh that seems missing in this film. The demons, for want of a better word, are missing.

The film indeed averts its eyes from van Gogh’s bleakest moments. The arguments with Gauguin happen mostly off-screen – I guess the film is placing us in van Gogh’s shoes in that it’s as much a surprise to us that Gauguin announces he can’t bear it any more as it clearly was to van Gogh. The ear cutting is related to us by a calmer van Gogh days later. The film also follows the line of the recent 2011 biography of van Gogh in believing his death was not suicide but manslaughter, a theory that I’m not sure I can really support (since it seems to be founded on a lack of understanding about how the depressed can seem fine one day and then suicidal the next) so maybe this is all intentional.

What the film does do well is get a sense of van Gogh as a soulful and gentle man. Willem Dafoe, as well as being a remarkable physical match for van Gogh, is also an actor made for both suffering and imbalance. After a career of martyrs, the intense, the unhinged, the mutilated and Jesus Christ, his face seems lined already with the cares of the world. Dafoe is very good here, soulful and vulnerable but with a monomania for painting under the surface that guides all his actions. But he has a wistful, childlike tenderness to him and a sense of a gentle man adrift in a world he can’t understand.

It’s a shame the film doesn’t have slightly more to it. Visually it gets a good sense of van Gogh’s striking colours. But I was put off by Schnabel’s addiction to using a wild hand-held camera. Often sloshing woozily around the frame, the camerawork is clearly an attempt to capture the urgent brush strokes and movement of van Gogh’s painting in its visual style – like his paintings it never sits still. It’s also perhaps an attempt to capture the mania of van Gogh’s inner life: it’s noticeable the camera work only calms when van Gogh himself is calm (i.e. painting). But it’s still not exactly easy to watch – like reading a book on the upper deck of a ship during some particularly choppy seas.

At Eternity’s Gate feels like it should be a better film than it is. Irritating camera work aside, it is well made and it has a fine performance at its centre. There are some decent cameos from the other performers – best of all Mads Mikkelsen as a kindly priest who gently, and with great sadness, breaks it to van Gogh that his work is clearly rubbish – but it never really feels like it gives any real insight into either van Gogh or his artwork. For all its panache, it’s strangely empty.
Email ThisBlogThis!Share to TwitterShare to FacebookShare to Pinterest
Labels: Artist biography, Emmanuelle Seigner, Julian Schnabel, Mads Mikkelsen, Mathieu Amalric, Niels Arestrup, Oscar Isaac, Rupert Friend, Willem Dafoe