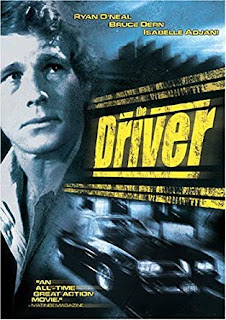 The Driver was Walter Hill’s attempt at making a pure genre film. Characters? Who really needs ‘em – how about we just name every character after their function? Plot? Let’s keep it really simple – cops and robbers? Events? Let’s never take longer than 20 minutes to get from one action, car-chase set-up from another. The Driver is an alarmingly simple piece of genre film-making – which means you can see why it’s been so popular with a generation of film-makers who have admired its stripped down cool and sparse chill.

The Driver (Ryan O’Neal) is a supernaturally gifted escape car artist, who lives his life by an almost samurai code and rigid punctuality. The Detective (Bruce Dern) is the obsessed cop willing to bend the rules in order to catch this uncatchable man. The Detective hires a gang of criminals to hire The Driver to be part of a bank job – he’ll let them get away with the heist if they will help him catch The Driver. But things are never that simple.

The Driver barely has a plot at all really – it’s totally about the vibe of creating something so stripped down there is barely anything left. Like pure experience cinema. However, somehow, a piece of pulp cinema like this still manages to end up feeling very self-important and pleased with itself, for all its grimy realism.

For starters, it’s hard not to feel slightly annoyed by none of the characters having names. On top of this they are all treated, to varying degrees, as unengaging ciphers, plot devices rather than human beings. When they speak they tend to stand and stare into the middle distance while doing so, or drop elliptical statements that feel important but are actually pretty empty. This isn’t helped by casting a selection of actors who are pretty balsawood in the first place: Ryan O’Neal is no one’s idea of Laurence Olivier, although at least his wooden delivery pretty much matches up well with a bland cipher like the Driver. Isabelle Adjani, in her first English language role, feels rather confused by the whole thing and goes for a dead-eyed inscrutability.

Perhaps, with the lack of energy coming from his co-stars, Bruce Dern goes all out as a character who, really, makes no sense at all as the lawman so obsessed with justice he’ll break the law to enforce it. Dern pretty much chews the scenery with wild-eyed intensity, even though in dialogue he also has too fall back on the same empty, metaphorical nonsense as the other two.

This all makes for a strange mixture of bizarre art installation and hard-boiled, super driving stunts. Everything that doesn’t take place behind the wheel of car is laced with a portentous self-importance. The driving in this film is, by the way, fabulous. The film has three major sequences of driving expertise which signpost each act, and each is shot and framed with an influential edginess by Hill. Using low angles, and strapping the camera onto the bonnet of the car, the film throws us into the middle of all the wheel-spinning action.

The opening sequence – a high speed escape from a robbery that narrowly falls behind the Driver’s tight schedule causing all sorts of problems – is a perfect entrée for what will come, neon lit cars burning down and through downtown LA, engaged in all sorts of fast turns and clever tricks to shake off tails. Hill follows this up with an entertaining sequence mid-movie, where the Driver proves his unquestionable skill by expertly manoeuvring at high speed around a car park, skilfully and deliberately knocking parts of the car off as he goes round. This all builds towards the final chase, which rips through a building estate and finally a factory as the Driver chases down the thieves who have fleeced him of his cash.

Ah yes, the cash. There is a complex sting operation going on here around some cash from a job being kept in a locker in a train station, but it hardly really matters (the film barely stops to explain it anyway). You only need to know it’s a trap but the Driver needs it as the results of this big job. Like the characters, events in the film matter only as far as their plot function requires. It makes for an odd viewing experience, but this has influenced so many films later – not least Drive which is a remake in all but name – that The Driver, for all it is a slightly frustrating watch at the time, is assured now of a classic status you wouldn’t have expected when it bombed at the box office on release.
Email ThisBlogThis!Share to TwitterShare to FacebookShare to Pinterest
Labels: Bruce Dern, Crime drama, Isabella Adjani, Ronee Blakely, Ryan O'Neal, Thriller, Walter Hill