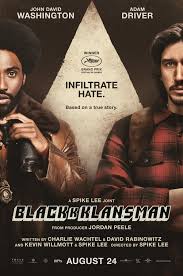 BlacKkKlansman feels like it would make great material for a comedy film. The true story of the first black cop in Colorado, who in the 1970s tricked the Ku Klux Klan (over the phone) to give him membership of the party, working with a white colleague for face-to-face meetings. Hard to believe but, as this film says, “Dis Joint is based on some fo’ real, fo’ real shit”. And the film has more than its share of comic beats. But Spike Lee is far smarter, and far more worried about where America is going, to simply make a film that turns the KKK into a gang of idiots. Instead this becomes a dark, terrifying vision not just of what America was but what it is.

Ron Stallworth (John David Washington) is that first black cop. Ambitious and keen to do his bit, he points out that he is perfect for some undercover work – and after first investigating some of the civil rights movement (and falling for Black Student Union Leader Patrice Dumas, played by Laura Harrier) he is motivated to turn his attention to the Klan. Cold calling local organiser Walter (Ryan Eggold), he quickly finds himself welcomed to the Klan (who are of course completely unaware of his race). Working with fellow undercover detective Zimmerman (Adam Driver), a more relaxed Jewish cop, who can handle the face-to-face meetings, Stallworth opens an investigation into extremism in the far right, with their main target being Grand Wizard David Duke (Topher Grace).

Spike Lee’s film starts as a clever balance between exploring the central comedy of this set-up – the black cop busting the KKK – and an exploration of the racial tensions that were barely concealed in America in the 1970s. Stallworth experiences a parade of suspicion and resentment of the police from his fellow African-Americans, while some of the responses from the police officers range from suspicion to outright racist distrust. It’s his brilliant handling and understanding of the racial tensions in America that power the movie – and give it the impact and importance it undoubtedly has.

The comic timing in much of Washington’s phone calls with various hard-right racists is spot on, and the film gets laughs from the gullibility and foolishness of the Klan (Duke talks at length about how he can always tell the difference vocally between a white man and a black man). But Lee knows that extremism like this fundamentally isn’t a joke – and it’s certainly not in this film, which wraps up a part cop-caper, part undercover thriller with a sharp political message.

Because no matter how stupid the KKK are, we are left in no doubt about how dangerous, violent and vile they truly are. The racist language, the repeated use over and over again of every insulting term imaginable for African Americans and Jews, the prolonged fantasy talk about lynchings and murders, the amount of guns these people have available to them, the mix of suave “public face” racists and the violence-as-a-first-resort hicks and hillbillies that follow them… It’s beyond alarming, its’ terrifying. And Lee is quite clear – give any of these people even the slightest piece of endorsement and encouragement, and they would gleefully enact another Holocaust. There ain’t nothing funny about that. 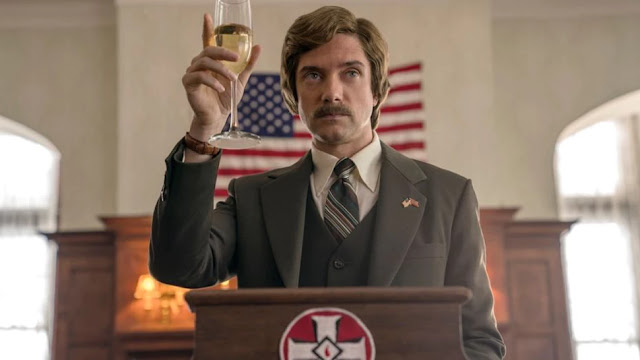 Instead, scene after scene of Adam Driver’s undercover cop interacting with this human slime shows no amount of humanity or empathy can be found at all among this appalling crowd of people. You feel the terror of these people and Lee fills every scene with a mounting tension and horror that slowly strangles (fittingly) the initial comedy of the set-up. But then that is part of Lee’s extraordinary work on this film, an angry blast of politically motivated invective wrapped up in an entertaining story. Lee makes it clear that we are kidding ourselves if we think racism is a problem of the past, or something that can be easily wrapped up (it’s easy to see why he was so pissed off that Green Book, a far more cosy hopeful film about racism, scooped best picture). The film ends with an alarming flash forward to shots from Charlottesville, reactions to the murder of Heather Heyer and shots of Trump mindlessly talking about “very fine people on both sides”. The message “America First” is shouted as proudly in the 1970s plotline as it is in the real life footage of 2017.  Hammering home Lee’s fears that the KKK have never had a warmer environment to work in than they do today.

Lee’s film does struggle when it comes to the plot that he builds around the events of the film. The film makes clear that in many ways the whole investigation was for nothing and produced no lasting results: it unearthed KKK sympathisers in key government departments (all of whom were “sent to Alaska” in the words of Stallworth) but was then abruptly closed down. While this real target is referenced in a throwaway scene or two, a late fictionalised bomb plot by the KKK – which of course revolves around Stallworth’s fictional black power girlfriend – doesn’t quite ring true and feels slightly out of place.

But the real aim of the film is Lee’s political message, and on that score this film is powerful, sticks in the mind and leaves a lasting impression. Lee’s direction is also a brilliant mixture of flash and sensitively filmed set-pieces. There are superb cameos from Harry Belafonte (in a heartfelt speech) telling a story of historic lynching, and Corey Hawkins as articulate, passionate activist Kwame Ture. Both these sequences stand out, with Lee’s controlled direction knowing when to move the camera and when to hold it and let the power of the words and emotions do the work.

The cast all give outstanding performances. Driver is chameleonic (and Oscar nominated) as the cop who moves naturally between his own liberal views and his easy approximation of racism. Washington is brilliant in the lead role as the dedicated lawman, willing to prove himself among the racists of his own department. Grace and Eggold stand out as two different types of the face of “acceptable” KKK. Lee’s film builds on these performances with his own passion to create a truly lasting and important piece of filmmaking. Never believe the world has changed: this film reminds us immediately that cozy stories that talk of “how far we’ve come” are fairy tale fantasies that distract us from the danger of a racial lynching being just round the corner.
Email ThisBlogThis!Share to TwitterShare to FacebookShare to Pinterest
Labels: Adam Driver, Corey Hawkins, Harry Belafonte, Jasper Pääkkönen, John David Washington, Laura Harrier, Ryan Eggold, Social issues, Spike Lee, Topher Grace