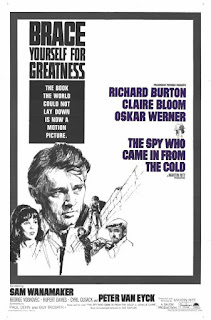 Spy stories fall into two camps. You get the wham-bam blast of James Bond and then you also get the grimy, isn’t-this-a-damn-dirty-trade stories that John Le Carré helped to turn into a major alternative. The book that really kicked off Le Carré’s career was The Spy Who Came in From the Cold, a slim, brilliantly written story of spies working exclusively in shades of grey. The book was a smash, the film was inevitable, and a damn fine film it turned out to be.

Richard Burton plays Alec Leamas, a former head of Berlin Station for the British Secret Service, who is recruited by the services’ leader Control (Cyril Cusack) as part of an elaborate scheme to discredit the cunning and dangerous head of the Stasi office in Berlin, Hans-Dieter Mundt (Peter van Eyck). Leamas will go through a pretence of disgraced dismissal, alcoholism, jail time and half a dozen other indecencies to attract the attention of the East German defector recruiters in the UK. But will the relationship he develops during his disgrace with librarian and idealistic communist Nan Perry (Claire Bloom) endanger the whole mission?

The Spy Who Came in From the Cold is shot in a grimy, gloomy black-and-white which is completely appropriate for the morally questionable escapades its characters get up to. Like Le Carré’s novel, the ends justify any means here, and questions of morality and justice are best benched. Characters who can’t let themselves to forget justice are doomed in this film. Genuine shows of real emotion and feeling are generally signs in this film that a person is doomed.

Martin Ritt’s literate script captures the style and tone of Le Carré extremely well – this is still one of the best, truest and most faithful capturing of Le Carré on the screen – and his direction also has a wonderful mixture of shabby kitchen-sink realism and classic Hollywood film noir class that makes for a brilliantly involving package. The pace of the film holds pretty well, beautifully carrying us through a parade of agents recruiting Leamas for the East Germans (each of which are dismissed with a shocking curtness by the next one along), and the final court room trial of Mundt (with its intricate exploration of the complex plotting of the novel) is extremely involving.

The film also has the benefit of a number of terrific performances, led by Richard Burton in the lead. By this stage of his career, Burton was already felt by many to be lost to serious acting in favour of big budget, Liz Taylor-starring pictures and Hollywood entertainment. But he rouses himself here to give one of his best ever performances. Leamas is a shabby, beaten down, little man (despite being played by Burton!) whose chippiness, dissatisfaction and aggression make him perfect as a possible defector. Ritt's camera often focuses on Burton's unflinching stares, his eyes seem to bore into the person he's talking to, little oceans of anger and resentment.
Burton’s Leamas is deep down sick and tired of the world of spying, its betrayals and lies, and sickened with self-disgust at his own involvement in it. Burton skilfully underplays the role throughout, largely ignoring any temptation for grandstanding or big acting moments – instead he is as compromised, grey and lost as the rest of the film, in a superb performance of cynical disaffection. Bunched up, his grand voice dialled down, his eyes flickering with resentment - a great performance.

Claire Bloom is rather affecting as Nan (hilariously, her name was changed from Liz in the book as the producers feared she would be confused with the rather more famous Liz in Burton’s life) and Oskar Werner gives the film a major burst of energy just as it is flagging from one interrogation of Leamas too many, as a chippy, eager, sharp Stasi officer, who is determined to see justice done. The rest of the cast are filled out with some classy Brit character actors, who excel from suave (Robert Hardy) to seedy (Michael Hordern), while Cyril Cusack brings “Control” to cynical life and Rupert Davies gets to the be the first actor to play George Smiley on screen (even if he is only really an extra here).

Spy is a film of atmosphere. Frequently it trusts the viewer to catch up the plot as they go. Leamas actions are not always explained until late on - and we are constantly suspecting that we are only seeing half the story. Its a film that plays its cards close to the chest. This might alienate some, but it's a true representation of Le Carre - and fits perfectly with the weary sense Leamas has of not being in control of his own life.

But what Ritt does so well is keeping that tonal sense of there always being another shady, compromising twist around the corner. All is never what it seems, and the film ends with an especially bleak series of footnotes as we find out just how ruthless both sides are prepared to be in this soulless chess game of Cold War politics. It’s the moments like this that Spy Who Came in From the Cold really nails. For Le Carré fans the film is a must: for those less interested in the world of espionage, they may find it takes a little too much time.
Email ThisBlogThis!Share to TwitterShare to FacebookShare to Pinterest
Labels: Bernard Lee, Claire Bloom, Cyril Cusack, George Voscovec, John Le Carre, Martin Ritt, Michael Hordern, Oskar Werner, Peter van Eyck, Richard Burton, Robert Hardy, Rupert Davies, Sam Wanamaker, Spy thrillers