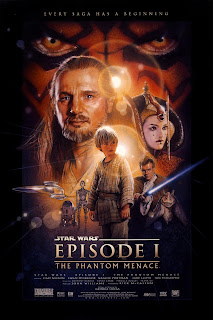 Of course you should have sensed a disturbance in the force the second you read the opening crawl. The first sentence “Turmoil has engulfed the Galactic Republic” sounds promising right? Well let that expectation die as we hit the second sentence “The taxation of trade routes to outlying star systems is in dispute”. Not exactly a flight for the Empire with the Death Star plans is it? Perhaps only a multi-millionaire like George Lucas could have expected a storyline based around a tax dispute would get the pulses racing.

But then this is a jumping off point for a seriously shambolic film experience. Phantom Menace is a total mess, an incoherent, poorly scripted, farce of a film, a terrible stumble through a dashed off storyline that makes no sense. Anyway, Naboo is a planet under siege from the Trade Federation. Jedi knights Qui-Gon Jinn (Liam Neeson) and Obi-Wan Kenobi (Ewan McGregor) are sent to negotiate but things quickly turn to violence and they need to flee the planet with its 14 year old (?) elected (??) Queen (???) Padmé Amidala (Natalie Portman). On the planet of Tatooine they encounter a 9 year old slave Anakin Skywalker (Jake Lloyd) with a natural instinct for the force. Qui-Gon wants to train him, while the Galactic Republic tries to resolve the siege of Naboo.

That’s sort of the story – but even writing it down seems episodic and vague. But then that’s everything in the film. Nothing is really clearly explained, and we are never properly introduced to who all the sides are in this film and what they might want. There is a complete lack of any real narrative sense at all. The antagonists and protagonists of the film are hard to define. In fact they are frequently a pile of two dimensional yawns. It’s pretty hard to care about any of them. I guess you feel a bond with Obi-Wan, but that’s based on old films – watch this and Obi-Wan is a do-nothing whiner.

But all the characters are infected by this. George Lucas is completely unable to bring any characterisations to these people, his lines constantly falling flatly or crappily to the ground, while the actors themselves struggle to find anything to engage it. Harrison Ford famously told Lucas on the first film that “you can type this shit but you can’t say it” – and that’s pretty much nailed on for this film. There is not one single vaguely memorable line in this film. Rather you are struck every second with feeble lines that sound like they might have had depth (“There’s always a bigger fish!”) but when analysed for a second make no sense whatsoever. It’s no wonder Neeson seriously considered quitting acting after this film.

There isn’t a single character in the film to really invest in. There is no equivalent to your Han Solo, the witty outsider to puncture some of the grandaeur. Instead every character is a flat, po-faced, non-personality who spend all their time in the film very seriously going about their business, never explaining anything. The Jedi are particularly affected by this, written as serious stick-in-the-muds constantly lecturing and ticking off other characters. Qui-Gon Jinn makes a tedious lead character, who constantly gets in the way of the relationship building we need to see between Obi-Wan and Anakin. Because we know where the film series is going, spending time on Qui-Gon feels like wasted time. The backstory is to see the relationship build between Obi-Wan and Anakin – instead they hardly speak in the film, and we instead spend ages on Qui-Gon. It’s poor story-telling and wastes a film showing us unimportant back story rather than spending time on the core stuff. It’s bad enough that we have to waste one third of the prequel series on Anakin Skywalker: The Wesley Crusher Years (seriously has anyone, even a child, ever loved a film where a brattish, super kid is the hero? You won’t be shouting Yiipppeeee…)

Lucas isn’t a director of actors, he’d say the same. But he is supposed to be a master of visuals and special effects. This is a film where everything you could possibly imagine has been thrown at the screen. Each frame is full of complex business, every single section crammed with special effects. There is a lot going on visually all the time, but all of it comes across like an explosion in a colouring book. Unlike the effects of the original trilogy, nothing really feels real or carries any real weight. Instead you see every special effects shot in the film and see frames filled with clutter and shiny, computer generated weightless nonsense. Worst offender is the hideously overextended pod race sequence, like a particularly dull Formula One race, which carries no real stakes (as we all know the result) and, for all the high speed camera work and editing feels not one iota as thrilling as the speeder chase in Return of the Jedi.

On top of this, most of the interventions into the Star Wars backstory makes the original trilogy worse. This is the film that gave us midichlorians, some sort of magic alien thing that lives in blood and gives the Jedi the ability to use the force. The reaction to this midichlorian nonsense, undermining the mystique of the force into something that could measured like a top trump was so negative that it was mentioned at most once in the two sequels. Other areas got similarly scathed, not least turning Anakin Skywalker into the worst form of “gifted child”. I’m not even going to touch on the icky fore-knowledge we have about the fact that Anakin and Padme are going to get it on in the future, something that is hideous to think about.

Lucas also fudged the new stuff he introduced in the film. The worst element: of course it’s poor old Jar-Jar Binks. I genuinely feel sorry for Ahmed Best, an actor whose career never recovered, who is just doing here what he was told to do. But Binks is the most irritating character possibly ever conceived for a hit blockbuster. An idiotic, comic creation designed for the kids who falls over, trips up, says stupid things and steps in shit he does nothing useful for the whole course of the film and tries to entertain kids who were way more interested in Darth Maul. Binks is almost irredeemable, every sentence enough to send everyone’s teeth on edge.

Lucas trumpeted how much Binks was setting the trend of being the first major computer generated character. Lucas was incapable of guiding the actors to respond (or even look at) the correct spaces where Binks was standing. And Lucas was so pleased with it, he never stopped to think. Binks makes no sense. Like the rest of the Gungans he’s a joke. There is literally no reason at all for the Jedi to take him anywhere with them, particularly as he constantly gets in the way, causes trouble and offends people. Even in the “desperate” final battle, Binks prats about – compare him to the moments of tragedy and sacrifice given to the Ewoks in Jedi and you’ll see how bad this is.

And of course he and the Gungans are shocking racist caricatures in their Jamaican accent. If you had any doubts that Lucas had no one saying no to him on anything, this film is stuffed with pretty shocking racist characters. Binks is terrible, but the villains of this place are the money obsessed Trade Federation, all with Japanese accents. On Tatooine, Anakin is kept by a greasy, fly ridden, money obsessed, big nosed, fly-covered alien Watto who looks, sounds and acts like a children’s version of The Eternal Jew. Did no one watching the film take a second and say “hang on this looks a bit dodgy…”

All of this nonsense finally comes together in a grand final battle which sums the whole film up, in a sequence where the tone shifts and changes all the time with no sense of a single person doing so intentionally. We have the Gungans comically fighting the droids in a series of awful little vignettes. We have the Queen chasing through the palace in a poorly explained subplot. We have a 9 year old child accidentally flying a ship into space and accidentally blowing up the baseship (Anakin saves the day without even realising it, the one thing that could make the child even more irritating than he already is). And we have the Jedi fighting Darth Maul in a battle that looks impressive at first but is in fact overly busy and overly choreographed.

The Phantom Menace has few reasons to like it at all. You get bored with the story. You don’t invest in the characters. You don’t engage with the events. You don’t feel your pulse racing. The plot drifts from planet to planet with very little logic at all. The dialogue is terrible. The story telling is abysmal. The direction is flat. The film throws in moments that crap over the original trilogy. Lucas made is wait for decades – but then seems to have produced a film that he didn’t really want to do. It’s a truly dire film.
Email ThisBlogThis!Share to TwitterShare to FacebookShare to Pinterest
Labels: Brian Blessed, Ewan McGregor, Frank Oz, George Lucas, Ian McDiarmid, Liam Neeson, Natalie Portman, Oliver Ford Davies, Pernilla August, Ralph Brown, Samuel L. Jackson, Star Wars, Terence Stamp, Terrible Films