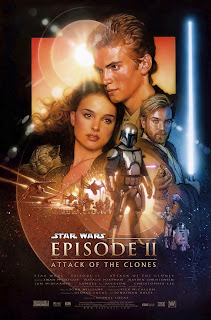 Nothing could be as bad as The Phantom Menace. Surely? Well, umm, Attack of the Clones is pretty bad, but it’s not quite as stodgy and racist as the first one. It really isn’t. But don’t get me wrong, it’s still tone death, poorly written, crappily directed, poorly assembled, textbook bad film-making disguised under a lot of money.

Anyway, ten years have crawled by since Phantom Menace. Padmé (Natalie Portman) is now a senator campaigning against a revolutionary Separatist movement in the Republic, led by mysterious former Jedi Count Dooku (Christopher Lee). After a failed assassination attempt, Jedi Knight Obi-Wan Kenobi (Ewan McGregor) and his Padewan pupil Anakin Skywalker (Hayden Christiansen) are assigned to protect her. After another assassination attempt throws up a strange link to a mysterious planet of industrial cloners, Obi-Wan investigates leaving Padmé in Anakin’s care: but the two of them are falling in love, strictly against the rules of the Jedi order.

Sigh. Attack of the Clones is once again a mess, overly computer engineered, badly directed by a director with no knack for visual storytelling other than throwing special effects at the screen. It has a densely disinteresting plot about shady dealings around a mysterious Clone army that eventually the film doesn’t bother to resolve. Lucas shoots the entire film in a shiny, sterile, entirely computer generated environment that looks worse and worse the older the film gets. It builds towards a series of clashes at the end that have impressive spectacle on first viewing, but are hugely empty viewing experiences the more you come back to them. But all this isn’t even the film’s main problem.

First and foremost, the most egregious problem with this film is the romance at its heart. This romance, whose impact is meant to be felt through every film is to come, is as clumsy and unconvincing as anything you are likely to see. Not for one second are you convinced that this couple could ever actually be a thing. For starters Anakin is a whiny, preening, chippy rather dull man who over the course of the film murders a village full of people. Hardly the sort of character to make women swoon. On top of this, his romantic banter and tendency of staring blankly and possessively at Padmé has all the charm of a would-be stalker, mentally planning out the dimensions of the basement he’ll imprison his love in.

Padmé is hardly much more engaging. Her way of handling this love-struck young man, who she claims she doesn’t want to encourage? To flirt with him in a series of increasingly revealing costumes, while constantly telling him “no we can’t do anything” – for unspecified reasons. But then as she says “you’ll always be that 12 year old boy to me” (Oh yuck George!). Portman looks she can barely raise any interest in holding Anakin’s hand, let alone conceiving future generations of Skywalkers. The desperate attempt to create a sense of “love across the divide” falls flat, flat, flat with all the sweep of a Casualty romance of the week. Put it frankly, we are never ever given any reason at all for us to think that they have any reason to be in love. 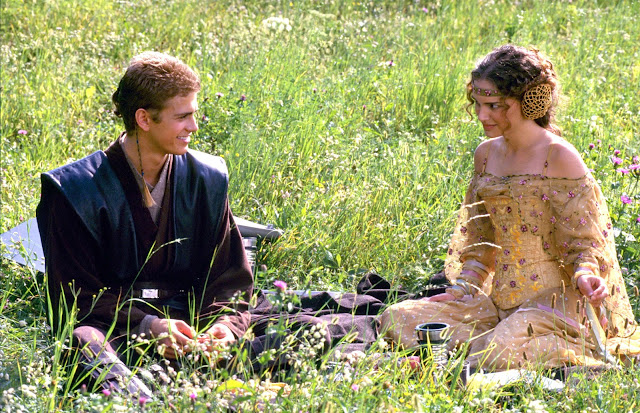 Despite all this the film desperately tries to throw them together into a series of clichéd romantic encounters, from candle-lit meals to gondola cruises around the lakes of Naboo. Jesus the film even throws in a flirtatious picnic (in which, true to form, Anakin espouses the benefits of totalitarianism, hardly the sort of thing to get a young girl’s heart fluttering!) followed by a roll around in the long grass after a bit of horseplay. To be honest it’s sickening and all the fancy dressing in the world never disguises the utter lack of chemistry between either characters or actors. And you’ll suffer with the actors who are trawling through the appalling “romantic” dialogue. The infamous “I don't like sand. It's coarse and rough and irritating and it gets everywhere. Not like here. Here everything is soft and smooth” sums it up – especially as Anakin ends it with stroking Amidala’s exposed shoulder possessively. Late in the film Padmé says “I’ve been dying inside since you came back into my life” – I know how she fuckin’ feels.

But then to be honest nothing really works in this simply terrible film. Of course a lot of the blame rests with Lucas whose overwhelming ineptitude as a writer and director is exposed in scene after scene. Most of the dialogue lacks any wit or lightness at all, constantly straining for a grandeur it can’t deliver and reads like George simply knocked out the first draft and left it at that. As for his directing: the camera positioning lacks any imagination what-so-ever. Most scenes that don’t have lightsabers feature characters sitting talking at each other to fill in plot details (I’m not joking here, there are so many different designs of chairs in this film it’s like strolling around IKEA). Sometimes George spices it up by having characters work slowly and aimlessly from A to B telling each other the plot (I’m failing to resist saying this is a pretty decent metaphor from the film).

The film shakes this up with a few action sequences which either tediously ape things we’ve seen before, but not-as-good (a chase through an asteroid field smacks of Empire Strikes Back) or having a computer game realism to them that never involves you. A prolonged sequence in a battle droid factory literally looks like a computer game from its hideously shiny lack of realism, to its logic, to the way George shoots it with the conveyor belt moving relentlessly forward visually like a dated platform game.

In fact computer game is a pretty good way of thinking about this film. When making this film, Lucas was convinced this would be the start of a new age: that only dull, traditional directors would be building sets and that all the cool kids would make everything in computers. Watching this film today in hi-def blu-ray does it no favours. Lucas’ computer generated sets (in most shots everything except the actors and their costumes are not real) look ridiculously shiny and unrealistic. There is no weight and reality to anything. Instead it all looks like some sort of bizarre, wonky computer visuals. How can you invest in anything in this film when even the goddamn sofa they are sitting on is a visual effect? How can anything have any weight or meaning? Compared to the lived in appearance of the Millennium Falcon, nothing looks realistic or carries any weight at all.

George Lucas isn’t really a director of action either. It’s hard not to compare the epic battles here with the style and substance of the (equally effects filled world) of Lord of the Rings being released at the same time. There, the battle scenes not only carry real emotional weight and peril but also have at least some sense of tactics and story-telling. This is just a collection of special effects being thrown at each other, like an exploding fart in a special effects lab. This makes for events that look impressive when you first see them, but carry no lasting impact: when you revisit the film, nothing feels important or dangerous or coherent – instead it’s just a lot of stuff happening, loudly. 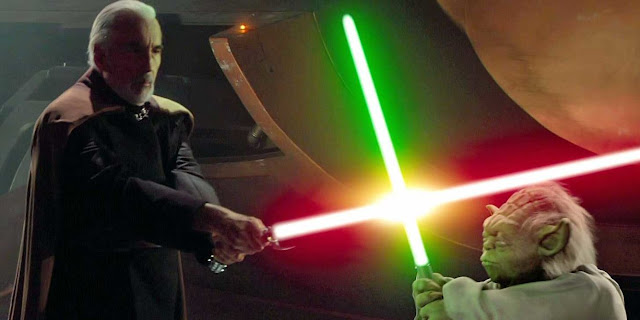 This goes for the famous Yoda-Dooku light saber duel. Sure when I first saw this, seeing a computer generated muppet take on a stunt double with an octogenarian’s face super-imposed on his felt really exciting. But again, on repeated viewings, it’s just a load of wham and bang that kind of leaves you cold (not least because the fight is a showy bore-draw). It’s as ridiculously over-made and over stuffed as half a dozen other fights in the film. It’s almost representative of how crude these prequels are: a character always defined by his intellect and patience in Yoda reduced to a bouncy special effect for a moment of cheap “wow” for the fans. I’ll also throw in the lousy fan service of turning Boba Fett (a character who has a fascination for a lot of fans for no real reason) into an integral part of the Star Wars backstory – as if George intended this character at any point to be so popular, until he released the merchandising opportunities…

Lucas’ direction fails time and time and time again. Even small scenes fall with a splat or feature moments that get the wrong type of chuckles. The moment where Anakin embraces his dying mother? Forever ruined by the snigger worthy collapse of Pernilla August’s Shmi in his arms, looking like a primary school child miming playing dead (tongue out and all) in a school play. Obi-Wan and Anakin’s chase through the skies of Coruscant packed with “jokey” attempted buddy cop lines that never ring true. The film has even more skin crawlingly embarrassing scenes than Phantom Menace, from a sickeningly cutesy room of “younglings” learning Jedi skills to Obi-Wan’s bizarre encounter with a greasy alien in some sort of American diner. There is precisely one moment of wit in the film (Obi-Wan using the force to tell a drug dealer to “You want to go home and rethink your life”). Other than that – nope, it’s poorly made, poorly written, poorly assembled rubbish.

None of the actors emerge with credit. Pity poor old Hayden Christiansen, left to his own devices by Lucas’s inept, direction free, direction. But he is absolutely, drop-down, unreedemably awful in this film. In fact Anakin, far from being a jumping off point, was the death-knell of his career. Was there really no other young actor with charisma who could have stepped in to take this role instead? Portman fairs a tiny bit better, while at least McGregor, Jackson and Lee have enough experience to take care of themselves. But there is no sense of relationship between any of these characters. The two most important relationships Anakin has in the film contain no chemistry: he and Padme and he and Obi-Wan (neither of whom seem to particularly like each other). 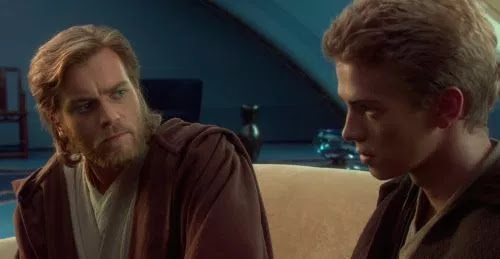 Attack of the Clones could never be as disappointing as Phantom Menace (what could?) but it’s far, far, far away from being a good film. It’s got a simply terrible script, is directed with a dull flatness that all the CGI flair and shouting can’t distract you from. There is nothing in there for you to invest emotionally in. It’s built around a relationship that quite frankly doesn’t work at all on any levels. It builds to a random ending that feels like George ran out of ideas rather than because it meets any thematic reason. How could it all have gone so wrong?
Email ThisBlogThis!Share to TwitterShare to FacebookShare to Pinterest
Labels: Christopher Lee, Ewan McGregor, Frank Oz, George Lucas, Hayden Christensen, Ian McDiarmid, Joel Edgerton, Natalie Portman, Pernilla August, Samuel L. Jackson, Star Wars, Temuera Morrison, Terrible Films