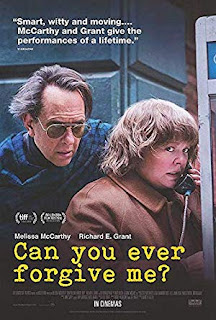 There is a certain pleasure in seeing the pretensions of the pompous being pricked. Is there anyone more pompous than the self-conscious exhibitionism of the literary collector? You know the sort – the kind who talk about how witty and true “dear Noël and Dorothy” were, and will pay a fortune in order to prominently display (show off) typewritten and signed epistles from their literary heroes, eager to be touching just a hint of the greatness of others. It’s a market failed writer Lee Israel managed to find herself immersed in – the difference being Israel was turning out brilliantly written pastiches, with forged signatures, that she was selling on to dealers.

Lee Israel (Melissa McCarthy) is a bad-tempered, difficult personality with a chip on her shoulder and a horror at the idea of letting anyone get too close to her. Struggling to make ends meet, she stumbles across some letters from Fanny Brice. Trying to sell them, she finds they sell for a lot more if she uses the blank space at the bottom of the letter to add a witty, more personal PS. From there she starts writing whole correspondences from scratch, covering authors as varied as Noël Coward, Dorothy Parker and Ernest Hemingway, her dedicated research producing letters that feel real and genuine. She’s aided and abetted by her sole friend, a drunken, seedy British homosexual Jack Hock (Richard E. Grant), who mixes genuine warmth and friendship with casual lies and betrayals. But how long can this criminal enterprise last?

Can You Ever Forgive Me? is an entertaining, well made part caper, part comedy, part sad little tragedy of a lonely woman struggling against the world. Lee Israel is blunt, rude, aggressive and speaks her mind and steadfastly refuses to live the kind of life required to get ahead in the literary world. She’s barely tolerated by her agent, and almost impossible to make friends with. Saying that, McCarthy’s trick is to make her far more of a Victor Meldrew character, railing against the petty rudeness and snobbery of the world, rather than an outright bully. It’s notable that the people she is most rude to are all cruel to her first.

All this helps you to invest in Israel, and feel sorry for a frightened, lonely woman who won’t let anyone into her life apart from her cat and feels only bitterness and frustration at where her career has taken her. Sure she may be difficult and even irritating to know personally, but Marielle Heller’s well-made film invests her with a great deal of empathy. Heller’s direction is shrewd, gentle and manages to turn a difficult woman into someone we end up feeling sorry for.

It also helps that this is a really warm, rather touching, relationship film that covers two best friends – and that it might well feature career best performances from the Oscar-nominated pair Melissa McCarthy and Richard E Grant. McCarthy (looking like a frumpy Annette Badland) is exceptional as Israel, vulnerable but defiant who makes more trouble for herself than she needs. Heller introduces a fictionalised semi-romantic interest from one of her literary dealers, a sensitive, kind would-be writer Anna (played well by Dolly Wells). It’s a relationship that shows Israel’s emotional frostiness, her instinctive defensiveness towards any personal interest – as well as hints of her guilt for essentially defrauding this woman. McCarthy’s performance – often caustically funny – is also deeply affecting for its fragility and desperation, too socially awkward to build relationships.

It also sparks brilliantly well off Grant’s superb performance as transient semi con-man Jack Hock. Grant channels elements of Withnail in the character’s bohemian alcoholism, but Jack is far more complicated than that. A wonderful contrast with Israel, Hock is immediately able to form bonds with people, patient, kind, gentle, an amusing raconteur and a man who takes pride in dressing up. Grant’s performance is humane, sensitive but also deeply funny with a long streak of selfishness and self-destructive compulsion. The relationship between these two is the heart of the film, an entertaining and endearing odd couple, with Hock getting closer than anyone to thawing Israel’s defences. Grant’s not only wildly funny, but also deeply moving – often in smaller moments, where he gently comforts Israel or (later) asks for forgiveness.

The warmth between the two friends is what makes the film work above anything else. It’s the heart of the movie – and the film is perhaps reliant on the excellence of the two actors and their chemistry. The story around them is, at times, rather slight and generally the film itself is so gentle to verge on being a little forgettable – but you never lose your focus because it has more than enough wit and those two brilliant lead performances to keep it going. Career best work in a well made film, makes this film more than worth catching.
Email ThisBlogThis!Share to TwitterShare to FacebookShare to Pinterest
Labels: Anne Deavere Smith, Biography, Dolly Wells, Jane Curtin, Marielle Heller, Melissa McCarthy, Richard E. Grant