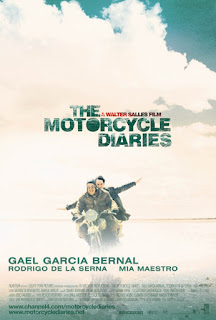 In 1952, Che Guevara – posters of whose face are as synonymous with students as baked beans and debt – is a young man in his early 20s, heading out for one final adventure with his friend Alberto Granado. They intend to motorbike the entire length of South America, from Buenos Aires to a leper colony in Peru. The journey will solidify Che’s views on socialism and help to shape him into the legendary idealist socialist revolutionary he will become. That’s the story of Salles’ film, the sort of film that will have a never-ending appeal to anyone who ever had a romantic interest in revolution history.

Sadly I don’t have that sort of passion, so I found it hard to be swept up in the romance of Guevara’s views, and Salles’ ambling, largely plotless film struggles to give you a real reason to care if you haven’t got a pre-existing admiration for its subject. Which isn’t to say this is a bad film – it’s certainly not – but it’s the sort of film that requires the viewer to have an investment from the start. It’s certainly a lot better – and gives a much better sense of Guevara’s character – than Steven Soderbergh’s thuddingly average Che double bill, but it’s still a rather drifting road movie.

The nature of all road movies is of course that they go from location to location, with each one throwing up a different collection of characters. I’ve got to be honest, none of these characters are particularly engaging or interesting, falling as they do into three categories: duped middle classes, attractive women who are duped or charmed by our two heroes, or sickly, poor or dying working classes whose suffering helps shape Che. It’s decent enough, but once you’ve seen it repeated a couple of times you don’t really engage in it much further.

It doesn’t help that the two leads don’t really change that much themselves over the course of the movie. I suppose that is at least a reflection of real life – and it does avoid the film cliché of “one life-changing journey”, but it also has a tendency to suck drama from the film. The real changes you see are that both characters’ pre-existing political views are both solidified – the difference being that for Guevara this will become his life’s work, whereas for Granado it will become a driver for his decision about where to take his work.

All this is no comment on the twin lead performances by Bernal and de la Serna, both of which are excellent. Bernal is wrapped in charisma and youthful idealism, humane concern and empathy in every pore of his character, mixed with a genuine warmth and enthusiasm as well as an excellent sense of humour. You can see why the latter attributes have drawn Granado to Che – and de la Serna is equally wonderful as a charming bon vivant with a heart and conscience.

Salles’ film is told with sweep and beauty, crammed with excellent camerawork. The road trip looks beautiful, and the film is extremely well cut and paced. While Salles does not quite extend the journey into a real interior exploration of his lead character, it does really capture the romantic poetry both of idealistic socialism and this On the Road type journey. Salles also mixes the tone extremely well of a film that turns from moment to moment from a social issue drama to a near knock-around comedy.

What he does slightly less well is to open the drama up to the unconverted. The moments used to demonstrate the poor and downtrodden essentially boil down to sad scenes where the sick and dying talk through their pain with Che. At several moments, the actors portraying the poor gather in monochrome line-ups to stare soulfully down the lens of the camera. It’s hardly a real search for the reasons or causes of poverty in South America, or an insight into the reasons for the differences between the working classes and the middle classes. It’s not a film that is trying to develop a political understanding, which is ironic considering it explores (or claims to) the life of one of the most political figures of the twentieth century.

Saying that, The Motorcycle Diaries has many, many strengths – even if I didn’t bond with it as much as I imagine many others will do. It’s an extremely well-made, dressed up, road movie that is full of events and a certain level of character insights – but doesn’t scratch down far below the surface to help you really understand the man or the times. It’s beautifully made and wonderfully performed – and it has real moments of youthful joy – but I just didn’t feel as strongly about it as I felt I should.
Email ThisBlogThis!Share to TwitterShare to FacebookShare to Pinterest
Labels: Gael Garcia Bernal, Mia Maestro, Political dramas, Road movie, Rodrigo de le Serna, Walter Salles