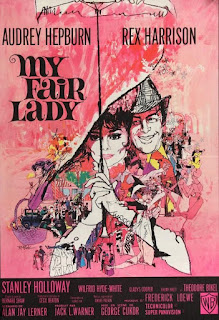 My Fair Lady is possibly one of the most popular musicals of all time. A singing-and-dancing adaptation of George Bernard Shaw’s most popular play, a satire on self-improvement and sexual politics, the original Broadway production ran for over six years and 2,717 performances, while the original cast-recording album was a smash hit bestseller. It was a question of when rather than if a film version would be made. When it finally happened, the film was garlanded with Oscars aplenty, not least Best Picture, Best Director and Best Actor.

The musical follows the story of Eliza Doolittle (Audrey Hepburn), a cockney flower girl in Victorian London, whose life is changed after a chance encounter with linguistics genius Professor Henry Higgins (Rex Harrison). Higgins has a bet with his colleague Colonel Pickering (Wilfrid Hyde-White) – he can change Eliza’s accent and manners so much that the shrill cockney girl will pass for a society belle. The bet will not only change their lives, but also those of Eliza’s father, sage-like binman Alfred (Stanley Holloway), and lovestruck romantic young gentleman Freddy Eynsford-Hill (Jeremy Brett).

From the start, producer Jack L Warner wanted to develop a new verison of the film, fresh and different from the stage production. George Cukor, the esteemed director from Hollywood’s Golden Years, was brought on board as a safe pair of hands – but it was clear Warner was calling the shots. How to put your own stamp on a massive hit musical? Well you start by getting a fresh cast in. Julie Andrews had made the role her own in the original production, so Hollywood was stunned when she was overlooked for the part. Instead Audrey Hepburn was hired – while Julie Andrews got the consolation price of being able to accept Disney’s offer of the role of Mary Poppins. Warner knew who he wanted for Higgins – and Cary Grant was swiftly courted for the role. But Grant refused, allegedly responding that he wouldn’t even see the film unless Rex Harrison was retained in his signature role.

So Harrison owes him a drink or two, because the film allowed him to leave a permanent record of a stage role he had played over 1,000 times on Broadway and in the West End. Harrison had taken a revolutionary approach to musicals, by basically not singing. Instead he sort of spoke the songs rhythmically – an approach that every other performer of the role has stuck to. The film is a brilliant capture of this unique and authoritative performance, and while Harrison is not exactly fresh he’s certainly charismatic, delivering every scene with confidence and well-rehearsed bombast.

Harrison’s steely lack of willingness to compromise also lead indirectly to a revolution in sound recording in the movies. Harrison refused to obey the custom at the time to lip-sync on set to a pre-recorded soundtrack. Harrison insisted that his performance was subtly different every time so he could never lip-sync accurately. Instead the technicians were forced to invent a sort of wireless microphone that could be disguised in the over-sized neck ties Harrison wears. This also means that at least one musical number has the bizarre situation of Harrison singing live, Hyde-White lip-syncing and Audrey Hepburn being dubbed. 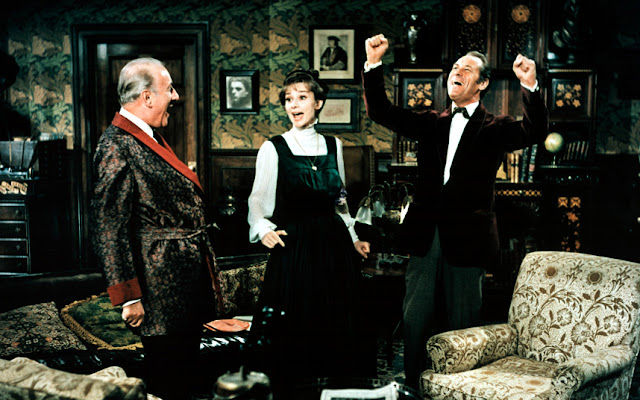 Ah yes Hepburn. If there is one thing everyone remembers about Hepburn’s performance in this film, it is that she doesn’t sing a single note of the final film. Her actual singing was quickly considered by Warner to be not up to snuff, and so she is replaced by voice-double-to-the-stars Marnie Nixon. It’s always a mark against Hepburn, whose performance is often rather shrill, stagy and (whisper it) even a little bit irritating. In fact, she’s pretty much miscast as the cockney flower girl, never convincing as a bit of rough from the streets, and is so horrendously misstyled throughout that she also jarringly looks like a 1960s fashion icon floated into a period film.

Having hired the male star of the Broadway production – not to mention Stanley Holloway also being retained from the original cast after James Cagney refused to be drawn out from retirement – the film quickly settles down into being a straight Broadway musical captured as faithfully as possible on the big-screen. My Fair Lady is a film crushed under the pressure of its design, and watching it today it looks unbearably studio-bound and flat. In every scene you can never forget you are watching the action take place on enormous sets, with the camera pulled back to try and get as much of the expensive soundstage work in frame as possible.

As a dance musical, it’s pretty flat – Holloway’s numbers in particular are strikingly lifeless in their dancing, which makes you regret even more that Cagney couldn’t be lured to star in it – and much of the singing feels forced or over-performed. Even Harrison’s numbers feel pretty by-the-numbers from Harrison’s constant repetition of them. Even the more impressive scenes – such as the race track sequence – feel artificial and over-designed, the money chucked at the careful period detail and over-elaborate costumes and set (designs courtesy of Cecil Beaton, who allegedly drew the designs and then disappeared to leave them to be interpreted by others) seeming more and more dated as the years pass by. 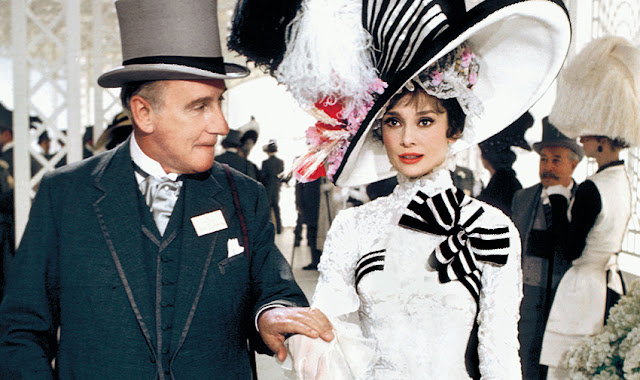 But then this was a film that probably felt dated at the time it was made – it beat Dr Strangelove for best picture, and in five years’ time Midnight Cowboy was lifting the Oscar – never more so than in Cukor’s direction. One wonders at times what Cukor really did: Warner cast the film and led on the design and staging. Harrison and Holloway had played their roles literally thousands of times already. The camera work is as conservative and unimaginative as you can expect, with the film dryly set up to give you the perfect view from the stalls. Several touches – such as the staging (complete with blurry focus edges) of Eliza’s fantasies of the domineering Higgins being punished by firing squad – are clumsy and obvious. It’s a film made with no real independent personality whatsoever.

Not to mention the fact that it completely fails to draw any chemistry from the Higgins/Doolittle relationship whatsoever. It’s an odd one, as the musical takes on a romantic ending of the two characters together – an ending, by the way, that Shaw famously hated when a suggestion of it was added to the original Pygmalion production. Here, this comes from nowhere, and feels unbelievably forced and artificial as Harrison has demonstrated no interest at all (other than irritation) for Hepburn, and she in turn offers little back. When they come back together it’s hard to care.

But they cared back then as this was a huge box office smash. It’s very odd to imagine it now – because this isn’t a great film, it’s a decently done one that carries some charm but never finds an identity for itself as film away from its musical roots and never brings anything unique and imaginative to the table. It’s extraordinarily flat as a piece of film-making and seems increasingly more and more dated in its performances, its atmosphere and its staging. It’s got some charm, but I’m not sure if it’s got enough.
Email ThisBlogThis!Share to TwitterShare to FacebookShare to Pinterest
Labels: Audrey Hepburn, Best Picture, George Cukor, Gladys Cooper, Jeremy Brett, Mona Washbourne, Musicals, Rex Harrison, Stage adaptation, Stanley Holloway, Theodore Bikel, Wilfrid Hyde-White