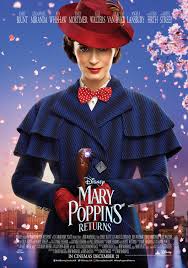 Some sequels go into production even before the first film hits the cinemas. Others give you a good long wait – and Mary Poppins has had you waiting 54 years. Of course, part of that was down to her creator, PL Travers. Travers so hated the Disney original (I mean, she really hated it) she outright banned all other adaptations of her work – but her estate were far more open to the prospect (and let’s be honest, probably also to the money) that Disney could finally go ahead with a sequel.

And thank goodness for that, since this delightful film is practically perfect in every way. It’s 25 years since the events of the first film, and Michael Banks (Ben Whishaw) is now a widower with three children, whose home is about to be repossessed by the bank for non-payment of loans. His sister Jane (Emily Mortimer) is trying to help, but the pressure and sadness are showing on Michael and are forcing his children Annabel, John and Georgie (Pixie Davies, Nathanael Saleh and Joel Dawson) to grow up fast. The Banks family is in trouble – so it’s the perfect time for the arrival of Mary Poppins (Emily Blunt) to save the day – with a little bit of help from gas-lighter Jack (Lin-Manuel Miranda).

Mary Poppins Returns is a triumphant mix of nostalgia and originality, that walks a very difficult tightrope between being a loving pastiche and tribute to the original film while also managing to bring its own original charm and magic touch. That’s a difficult trick to pull off – but it basically takes a slight remix of the original film’s story and adds a heft of emotional impact to create something that feels modern and fresh while also being very close tonally to the original.

This is never clearer than in Emily Blunt’s sublime performance as Mary Poppins. If there is anyone who had a more difficult job in this film than Blunt I can’t think of them. She had to take on the most iconic character of an iconic actress – and does so brilliantly, but creates a character who feels an equal mix of both Andrews and Blunt. This is clearly the same character as before, but Blunt mixes in a wonderful heart-warming care and concern under the pristine English exterior that melts the heart. She has a glowing twinkle to her, an almost bottomless charm with an endearing delight for the wonder and silliness that is part of Poppins world. And boy can she sing and dance? She carries the film with effortless grace – to such endearing effect that, just like with Julie Andrews, you miss her as she becomes less prominent in the final act. 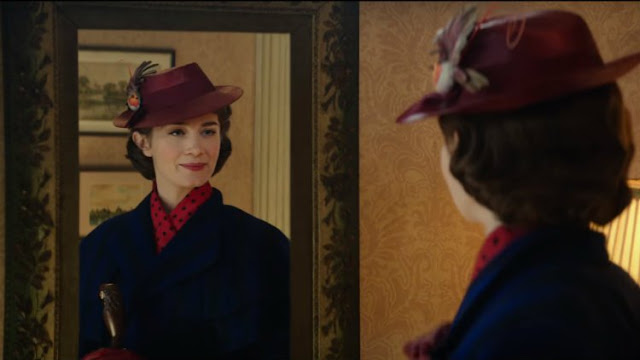 And of course she is matched by a superb company of actors. Lin-Manuel Miranda makes the transition to the big-screen like a duck to water, hugely loveable, wonderfully charming and superb (as you would expect) at the musical sequences. The three children give exemplary performances, with never a hint of sickly sentimentalism. Emily Mortimer is radiantly giddy as Jane, while Ben Whishaw will bring a lump to the throat as a Michael who is struggling under a huge amount of grief.  That’s not the mention wonderful turns from the whole of the cast, especially from Holdbrook-Smith as a kindly lawyer. 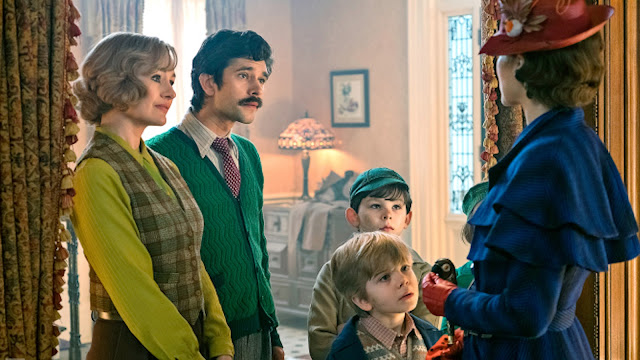 All these actors are “marshalled” brilliantly by director Rob Marshall. With his experience of musicals – both on screen and stage – Marshall knows his stuff and brings all his experience to bear here to create a sequel that will be seen (I’m sure) as a worthy companion to the original. Marshall’s direction of the musical sequences is faultless. He knows exactly how and where to place the camera for maximum effect, and gets just the right tone and mood from these scenes. He’s also, let’s not forget, a brilliant choreographer and has put together some exquisite sequences, not least the lamplighter song Trip the Light Fantastic, a whirligig showstopper of a number that if you saw it in the West End would have the whole crowd on their feet.

The songs make for easy criticism (reviewers seem duty-bound to say they are not as good as the original) – but to these ears Marc Shaiman and Scott Whitman’s songs and scores are both catchy and engaging. Give them time and I’m sure you’ll find them as replete with impact as the Sherman brothers’ tunes from 1964. Saying that, there might be one musical number too many – but that’s a very minor criticism. 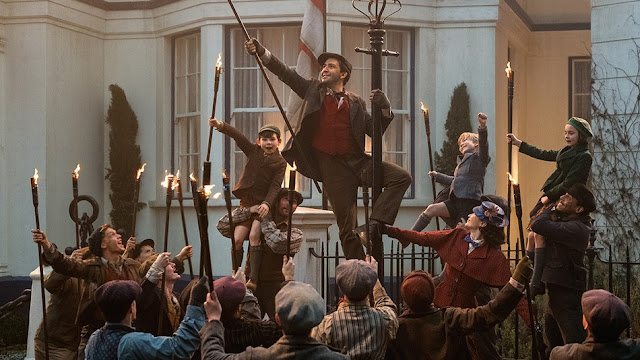 Because this is a film that gets so much else right. The storyline is certain to leave a lump in the throat, with its delicate handling of grief and the sadness both of growing up and also children being forced to leave their childhoods behind in impossible circumstances. These are universal themes – and they certainly impacted on me, and on a cinema packed with families all of whom were engrossed. That’s part of the magic of what Marshall has achieved here – heck, even the final Big Ben set-piece starts pushing you towards the edge of your seat in tension. I also loved the bravery of the colour-blind casting. It’s a film that stands on its own feet so well, it almost takes you out of the film when Dick van Dyke appears at the end – it doesn’t need the cameo, this film is its own beast.

Mary Poppins Returns will leave a smile on your face and a glow in your heart. It’s totally lovely from start to finish. Emily Blunt is superb (with wonderful support from all) and Rob Marshall triumphs as director and choreographer in this, surely his finest movie ever. It’s got something for all ages, and a truly heart-warming story. It takes everything that works so well in the first film and builds on it. It’s a wonderful mixture of homage and originality, that you will enjoy time and time and again. Practically perfect!
Email ThisBlogThis!Share to TwitterShare to FacebookShare to Pinterest
Labels: Angela Lansbury, Ben Whishaw, Colin Firth, David Warner, Dick van Dyke, Emily Blunt, Emily Mortimer, Family drama, Julie Walters, Lin-Manuel Miranda, Meryl Streep, Musicals, Rob Marshall, Walt Disney