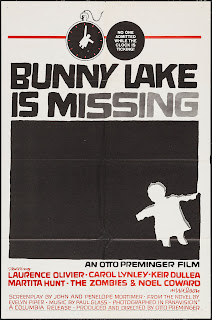 Otto Preminger’s career was an interesting mixture of high-brow, noirish thrillers and pulpish adaptations. Bunny Lake Is Missing is a mixture of these, a restructuring of a hit novel. Transplanting the novel from New York to London, the film covers a single day and the investigation into a missing child ‘Bunny’ Lake. Her American mother Ann Lake (Carol Lynley) drops her at her new school, and returns at the end of the day to find no one has seen her daughter or any record of her existence. While her protective brother Steven (Kier Dullea) rants and rages, Superintendent Newhouse (Laurence Olivier) leads the investigation. As Newhouse fails to find any evidence for the child’s existence at all, the question is asked: is she a figment of Ann’s fragile imagination?

Preminger plays this delicate game of “guess who” with the audience for a skilled and enjoyable 90 minutes before giving us any form of answer. The film throws us straight into the mystery of whether Bunny is real or not from the off, as our first shot of Ann is her alone in the school after dropping her daughter off. We see as little evidence of Bunny’s existence as the cast does. From there it’s a careful balance between giving us enough reasons to both trust Ann’s conviction her daughter is real and also give us enough reasons to suspect that Ann may be as unbalanced as Newhouse is concerned she might be.

It’s quite the game the film plays, and Preminger does it very well, the film never tipping the hand too much one way or the other. Shot in luscious black and white, it’s a film of noirish shadows and imposing blackness where everything feels a little bit out of kilter and untrustworthy. Preminger throws us into Ann’s perspective by using a number of clever tracking shots that allow us to follow her through the events of each scenes. These shots are sustained, subtle and also give us a further subconscious reason to trust her – we are effectively seeing the events of the film side-by-side with her. It makes for a rather empathetic film, and one you find yourself investing into.

Not least because it completely understands the twin horrors of both losing a child and not being believed by anyone no matter how desperate you plead that you are telling the truth (no matter how generous people are while doing so). Preminger acutely understands we all deep down worry that we are going to be let down by those we need to believe in – and this feeling of concern, mixed with frustration and pity for Ann is what draws us to her. Even while we think there is more behind Bunny’s existence than meets the eye.

The screenplay by John and Penelope Mortimer also throws plenty of potential suspects at us. These are largely a series of delicious cameos for vintage British actors. These extreme odd-balls also make the two Americans in London (Ann in particular) seem even more like fishes out of water. Martita Hunt is excellent value as a retired school headmistress, seemingly confined to a bedroom in the attic of the school (!) whose hobby is recording children talking about their nightmares. Anna Massey is equally good as a harassed matron more concerned about the negative impact on the school’s reputation than child’s safety. Pick of the bunch of this rogues gallery is Noël Coward (having a whale of a time) as Ann’s drunken landlord, a faded actor and sexually ambiguous seductress who in one priceless scene gleefully shows a group of police detectives some of his favourite whips (“I find the sensation [of being whipped] rather titillating…[this was] reputed to belong to the great one himself. The Marquis de Sade”) from his collection of bizarre sex toys.

These perverts, oddballs and weirdos are all investigated with a cool professionalism by Laurence Olivier’s Superintendent Newhouse. Olivier gives possibly one of his most humane, restrained and engaging performances: he’s the epitome of caring, dedicated professionalism and a superbly humane detective. Carrying much of the burden of conveying the films narrative, Olivier is superb here – and he manages to make Newhouse exactly the sort of man you would long to investigate your child’s disappearance, even as he starts to doubt the child even exists. Olivier is in fact so strong, that the parts of the film where he disappears suffer noticeably from his absence – no one else among the principles can match him for presence.

Saying that, Carol Lynley does an excellent job as a character we invest in and sympathise with, but can never quite bring ourselves to be sure is reliable. It’s a difficult line she walks between being believably distraught and simultaneously slightly off kilter, enough to make you worry that she be (knowingly or not) making the whole thing up. The feeling may be more than helped by the exceptionally weird relationship between herself and her brother, one of an incestuously unsettling intensity (their relationship as brother and sister isn’t divulged until almost 15 minutes into the film and it’s as much a surprise to the audience as it is to the characters).

Kier Dullea as her brother gives a decent, if rather strained performance, as Steven. Dullea’s slight emptiness in the role can perhaps be partly attributed to his terrible relationship with Preminger, later claiming making the film was the worst experience of his life. (Olivier was also unimpressed calling Preminger a bully).

It’s a shame as Dullea is crucial to the final sections of the film. I won’t give away the reveal and solution, but Preminger overplays his hand here, stretching the final sequence of the film out to a full 15 minutes which rather overstays its welcome. Maybe the sort of psychological complexity it’s aiming for is a bit more familiar to use today, than it was in 1965, but it certainly feels like a scene overstretched. But that’s a blemish on a very solid mystery before then that brings more than enough pulpish pleasure, fine performances and interesting film making to reward rewatching.
Email ThisBlogThis!Share to TwitterShare to FacebookShare to Pinterest
Labels: 1965, Anna Massey, Carol Lynley, Clive Revill, Film noir, Finlay Currie, Kier Dullea, Laurence Olivier, Martita Hunt, Murder mystery, Noël Coward, Otto Preminger