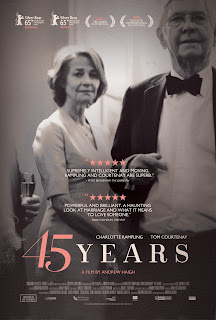 What would you do if you found out, after 45 years, that there were huge things you never, ever, knew about the partner you had shared your life with? That the very basis of your marriage is completely different than you believed? How would that change everything you remembered before that? How could that change where your marriage may go in the future?

That’s the situation Kate Mercer (Charlotte Rampling) a retired teacher in a quiet country house outside Norwich finds herself in. Five days before their 45th wedding anniversary party, her husband Geoff (Tom Courtenay) receives a letter from the German police notifying them the body of a girl who died 50 years ago, Katya, has been found. Katya had been lost falling into a crevasse on a climbing holiday with Geoff. Geoff is profoundly shaken and distracted by the news – and over the next week, it emerges his relationship with Katya was far more profound and important to him than he has ever mentioned to Kate (and in fact he has never mentioned Katya to her before).

Counter as it runs to spoiler territory, I’ll say off the bat that Geoff did not murder Katya (the obvious, knee-jerk, twist we expect from years of films). Instead this is a far more complex and engaging story about the impact profound, emotional revelations can have on relationships that seem as strong and long-lasting as between Geoff and Kate. The film follows a single week as long since buried feelings, emotions and resentments begin to simmer and burst out – and as Kate begins to question everything she has ever understood about her Geoff and her life.

And how shocking would that be if you learned things about the person you loved that suddenly made them feel like a completely different person? And how could you ever begin to compete the with the romantic image your partner has in their head of someone who died 50 years ago, before they ever met you, but whom you start to feel everything you have ever done or said has been quietly, maybe even subconsciously, judged against?

45 Years is a hugely intelligent, acute and engrossing film. Virtually a two hander, it relies on the actors – shot by Haigh with an intimacy that immediately establishes their own long running and secure relationship – the film is a series of carefully structured conversations, many of which have the surface appearance of normality that hides far deeper emotional currents of angry, loss, grief, doubt and resentment. The film brilliantly taps into our own fears of having secrets kept from us, of being betrayed in some way – even if the betrayal is far more complex than expected.

And it understands completely that time here is not a healer. Instead, like some sort of monolithic ghost, Katya invades Kate and Geoff’s life. For Geoff it brings back a flood of feelings that he had long since repressed and pushed to one side. For Kate, these age old events have all the pang of newly discovered revelations. For them both Katya’s death may as well have been a few days not fifty years ago. Suddenly, her memory begins to permeate every inch of their home and every second of their (previously) happy marriage.

All this is played with expert compassion and humanity by Tom Courtenay and a possibly career-best Charlotte Rampling. Rampling (famously cheated of a BAFTA nomination like Courtenay but honoured with an Oscar nomination) mines untold depths of vulnerability, emotional doubt and insecurity that solidifies into barely acknowledged feelings of anger, pain and resentment. The final sequence of the film – set at that celebration party we were waiting for – rests on her brilliance at wordlessly reacting as she slowly processes the things that she has discovered in the last few days, and how they have changed her perception of both her, her husband and the decisions she and he have made in their lives.

Tom Courtenay is equally good as Geoff, becoming increasingly distant, withdrawn and anger, but (in that very British way) trying to pretend nothing has changed. He throws in flashes of carefree fun and moments of trying to jolly on, but it’s never really real. The two actors are also brilliant at suggesting the lived in comfortableness of a long term relationship, every scene of theirs having a careful short hand of intimacy. Two sublime performances.

The whole thing is brilliantly packaged by Andrew Haigh’s subtle and careful direction into something that haunts the imagination long after it finishes. It’s the sort of film you’ll be desperate to discuss with people as soon as it finishes, to try and understand and interpret what you’ve seen in it. That final sequence is a perfect pay off for everything you’ve seen before, a brilliant sequence of uncertainty and hesitation. Fabulous film making and a very good film.
Email ThisBlogThis!Share to TwitterShare to FacebookShare to Pinterest
Labels: Andrew Haigh, British Films, Charlotte Rampling, Dolly Wells, Geraldine James, Tom Courtenay