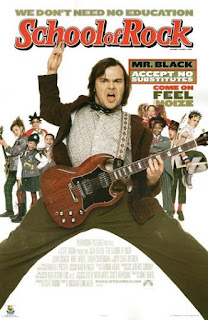 The early 2000s saw the rise of a new force in American comedy films: rotund, rock ‘n’ roll, John Belushi-light Jack Black. Following his breakout role as a music-obsessive with purist tastes in High Fidelity, School of Rock saw the legend of Jack Black hit its peak. And it deserves to, as School of Rock is the sort of perfectly-formed treat that achieves everything it sets out to do.

Dewey Finn (Jack Black) is the sort of slacker man-child beloved of indie filmmakers, who has never grown up from his dreams of being a rock star. The only thing really holding him back? Fate and his own selfishness. Dewey’s expelled from his own band, due to his penchant for extended guitar solos and distracting stage antics, and his old bandmate-turned-respectable-supply-teacher, Ned Schneebly (Mike White, also the film’s writer) is pressured into finally asking Dewey for his share of the rent by Ned’s domineering girlfriend Patty (Sarah Silverman). Desperate for money, Dewey impersonates Ned and takes a role as a supply teacher for a group of 12-year-olds at a prep school. At first Dewey just wants to leave the kids to their own devices and pick up his cheque – but when he hears his new students in their music classes, he suddenly has a brainwave: they could be his new band, and help him win The Battle of the Bands competition.

School of Rock is an immensely heart-warming film that manages to never sell out to become sentimental or depend on its characters learning “lessons” that improve them. Sure lessons are learned, and the film is very sweet, but it manages to wear this all with a cool lightness. In fact the whole film becomes a rather touching paen to the transformative power of music, and the way it gives people confidence and a voice.

Linklater directs with a breezy cool, drawing some fantastic performances from the whole cast (I can’t give enough praise to a director who gets such relaxed, natural and funny performances from children as Linklater does here) and totally embracing the clichés of the “inspirational teacher” genre, with a comedic bent. The kids are the expected combination – the precocious ambitious one, the shy ones who hide skill, the brash wannabe bully who finds the joy of being part of the group – but they are all portrayed with such freshness and energy that the clichés hum with joy.

Linklater’s real stroke of genius is letting Jack Black rip in the lead role. The part is so perfectly tailored to Black that it feels like almost an extension of his own personality. Black is a force of nature in the role, a perfect combination of showboating and carefully thought out character work – and he works brilliantly with the kids. He’s hilarious as well, first as a wannabe rock star layabout, later as a band leader for the kids who discovers in himself a work ethic and ability to inspire.

The character works because, deep down, under the selfishness and laziness, Dewey is basically a pretty decent guy. He cares about people’s happiness and he has a romantic view of rock and roll as a source of self-expression and celebration of life. (Although fortunately for the film, he’s no fan of the whole drugs side of many of the musicians he worships – having no time for the “poseurs” who attempt to impress the kids with the smoking and gambling at one Battle of the Bands audition.) And he’s so passionate about this that he can actually turn himself, if not into a teacher, at least into the sort of inspiring mentor who can bring his students out of their shells.

And he does this without really changing fundamentally who he is. Sure he’s touched by the kids, just as he’s touched them (to slightly misquote the film’s cheeky paedophile misunderstanding gag, when Dewey is busted by his charges’ parents!), but the warmth under the bluster is there all the time. And Dewey doesn’t suddenly turn into a high achiever or perfect guy – he just learns to channel his enthusiasm into encouraging musical skills in others (and there is something really sweet in his genuine, warm enthusiasm for talent from the very start). The film even allows the headmistress of the school (very well played by Joan Cusack as an under-pressure uptight woman yearning to cut lose a little) to be a spiritual ally and well-meaning obstacle rather than an opponent.

It’s this good natured warmth that runs through the whole film, and which at the end finds every character contented and united. (Well nearly every character – the film can’t shake its love of wistful man-childishness sufficiently to resist turning Ned’s girlfriend into a humourless, nagging shrew, in the film’s only real misstep). Plus the film rocks really well, and seeing the band together and perform is both fun and really sweet. No one puts a foot wrong here, and a lot of its success is due to Linklater’s ease and Black’s dynamic, verging just the right side of cartooney, comic tour-de-force at the centre.
Email ThisBlogThis!Share to TwitterShare to FacebookShare to Pinterest
Labels: 2003, Comedy, High school drama, Jack Black, Joan Cusack, Mike White, Richard Linklater, Sarah Silverman