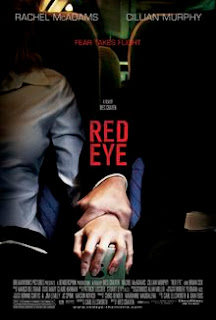 Are there any two things in the world we are more unsettled by than plane flights and the possibility that the strangers we meet might turn out to be nutters? Well Red Eye taps into both of those terrors with an effective B-movie of fast-paced brutality, which plays out almost in real time. Lisa Reisert (Rachel McAdams) is catching the red eye flight home to get back to her job managing a five-star hotel in Miami. At the airport bar she meets handsome, charming stranger Jackson (Cillian Murphy), and then finds herself sitting next him to on the plane. Just as things seem to be going well for romance, Jackson reveals he’s a terrorist and he wants Lisa to change the room booking of the Director of Homeland Security so his team can take him out – and if she says no, hitmen will take out her beloved father Joe (Brian Cox). But there may be more to Lisa than Jackson bargained for.

Craven’s film is an extremely efficient, sharp, lean little thriller with a cracking idea at its heart. It’s such a whipper cracker of an idea – the stranger on a plane who turns dangerous – that once the claustrophobia of the flight is removed in the final quarter, the film never quite gets its energy back. It’s Lisa’s mid-flight powerlessness, the self-contained, claustrophobic lack of escape, that makes the first three quarters of the film so compelling. Because as soon as Lisa realises that there is something wrong, there is nothing she can do and nowhere she can go to escape. And Jackson has manoeuvred the situation so she looks like the untrustworthy, awkward one while Jackson seems (outwardly) reasonable and friendly – cutting off any chance of help from fellow passengers.

These sequences in the plane work so well because they are so tightly directed, written, edited and played. Rachel McAdams is very good as a woman who at first seems self-occupied and slightly distant, then weak and vulnerable, before becoming resourceful and courageous. She’s well matched by Cillian Murphy as the smooth, in-control terrorist who begins to crumble as his plans turn against him.

It’s another decent structural twist in the film as it’s Rippner’s own arrogance and pride that eventually proves his undoing, as he drops enough information amongst his hubristic brags and threats for Lisa to work out how she can gain the upper hand. Before that she already shows plenty of invention to try and communicate her situation to the other passengers – and the tension of these cat-and-mouse games of evasion is portrayed perfectly.

It’s not a perfect film. The final quarter too quickly turns Murphy’s character into a psychotic version of his near namesake, Jack the Ripper, while the final cat-and-mouse hunt between these two characters in a new location doesn’t have the same tension as the plane setting. Similarly, the plot hinges on McAdam’s character falling victim to a past sexual assault – and how that event has shaped her later life – that today seems a little uncomfortable in its perfunctory treatment in the story. But these are blemishes – Red Eye is largely a sleek little thriller that makes its points with a nail-biting B-movie meanness. Craven sure knew how to put something like this together.
Email ThisBlogThis!Share to TwitterShare to FacebookShare to Pinterest
Labels: 2005, Brian Cox, Cillian Murphy, Rachel McAdams, Thriller, Wes Craven