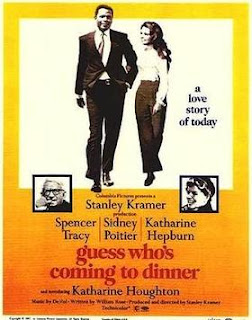 Stanley Kramer’s films today are quite easy to knock. In fact, to be honest, they were pretty easy to bash back then. Kramer was a man with immense social conscience, and his films carry the same liberal agenda. They were about “Big Themes” and they had a “Message” that they very much wanted the viewer to take home with them. You can see why so many of them were littered with Oscar nominations. Guess Who’s Coming to Dinner is perhaps the most famous of his liberal films, and while we’d love to think the theme it covers today – interracial marriage – isn’t still an issue, I  think many people would say it still was.

Joey Drayton (Katharine Houghton) returns to the home of her liberal parents – Matt (Spencer Tracy) a newspaper editor and Christina (Katharine Hepburn) an art gallery owner – with Dr John Prentice (Sidney Poitier) whom she announces as her new fiancé, after a whirlwind romance in Hawaii over the past two weeks. Her parents, Matt in particular, are hit for six – and their doubts are shared by John’s parents (Beah Richards and Roy E Glenn). Can the older generation overcome their concerns to celebrate the happiness of the younger?

Guess Who’s Coming to Dinner is a sensitive, very carefully handled film, whose liberal earnestness practically drips off the film. It’s so hand-wringingly liberal in its outlook it’s almost impossible not to mock it a little bit. Not least because John is so ridiculously overqualified – a professor of medicine, one of the world’s leading experts on tropical diseases, a nominee for the Nobel Prize – that you can’t help but wonder what he sees in her not vice versa.

This over-qualification was, by the way, an intentional move by Kramer, who was keen that the only possible objections to John could be the haste of the engagement and the colour of his skin. It’s the latter point that becomes the main discussion point, with some hand-wringing concerns around the attitudes of the wider world, and Matt Drayton in particular being moved to question whether he can practise the liberal agenda he preaches. It’s no real surprise to say that eventually all the characters sit down to the eponymous dinner in blissful harmony, but the film is delivering a positive message here.

You could say that it would have been more daring to make John, at the very least, a middle ranking accountant or something at least. But, let’s be honest, at the time this film was made interracial marriages were literally illegal in 17 US states (as the film name checks). Saying that though, the possibility that a BAME male may feel uncomfortably out of place in liberal White America has hardly gone away. It’s one of the reasons why I think the film still works and carries a message today – because if we want to think that these problems have gone away completely today, we are kidding ourselves.

Therefore, however right-on the film may be, it’s still relevant today and it’s still got something to teach us. The world we live in now may well have pushed some of the views and issues expressed in this film underground – we certainly don't (I hope!) bandy around the word “Negro” as often this film does – but they are still there. So Kramer’s hopeful message of reconciliation and overcoming knee-jerk prejudice is still one that packs a punch. It’s that message that brought such an amazing cast on board, not least Spencer Tracy and Katharine Hepburn as the Drayton parents. Tracy was extremely ill at the time of the film’s production – he died 17 days after filming completed. Tracy was so fragile – as can be clearly seen at several points – that he could only film for three hours in the morning, and only on intermittent days. The film was only made with him because Kramer, Hepburn and Tracy agreed to take no up-front fee, as Tracy could not be insured to finish the film. Hepburn in particular – Tracy’s partner for over 20 years – nursed him through the film, helping with his lines and carefully watching to make sure he was not overcommitted. Not a single shot of Tracy was taken on location due to his ill-health, and a number of scenes were cleverly shot to avoid Tracy having to be on set as often as possible. 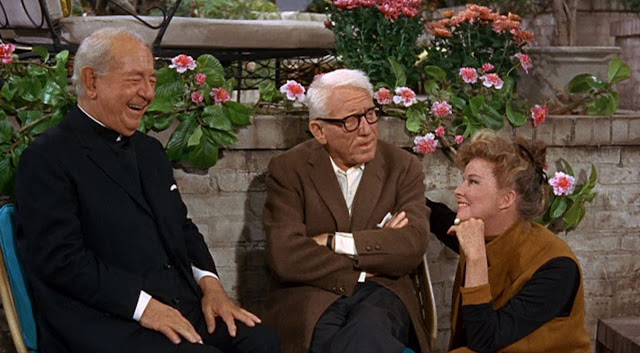 Despite all this, Tracy is magnificent. His underlying warmth and humanity work so well for the part that you constantly warm to him, even while you are as frustrated as many of the other characters  with his lukewarm reaction (bordering on hostility) to the wedding. You totally feel empathy for his situation, while at the same time wanting to give him a slap in the face. And man Tracy knows how to react – he is marvellous in a scene with Richards, where all he does is stand, half turned away from the camera and listen. But in this scene you see Drayton think and reassess everything he has considered in the last 24 hours.

But the whole film is building towards the final 10 minutes, which is nearly a complete Tracy monologue – and this is extremely emotional, not least as we are watching a great actor, aware he is dying, knowing that this is his last acting moment, talking emotionally of his love for his fictional wife, while his real life partner of 26 years sits tearfully in shot. It’s that extra level that really creates the emotional force.

Very good as Hepburn in, it’s clear in many scenes that her mind is more on Tracy than her performance – but she still has many wonderful moments, with similar emotional force. She also has one of the film’s funniest moments, where she imperiously dismisses a gallery colleague for barely hiding her racist disgust. Hepburn won the Oscar but stated she had never watched the film, finding the memory of making it far too raw.

The rest of the cast are also good – you can tell their commitment to the film – with Poitier conveying both human decency and firmness of character. Kellaway is very good as the only person in the film who expresses open-minded joy at the union. Richards has a wonderful emotional speech about the value of love, while Glenn conveys all the awkward frustration of a father who cannot understand his son.

Guess Who’s Coming to Dinner is a very worthy film – and boy it knows it – but it’s got a sort of innocent idealistic purity about it. Its makers clearly believed that they were making a film that would contribute towards changing attitudes in society. And for all its heavy-handed liberalism, you can say it did to a certain extent - but not as much as it would like to. For that reason, there is a sort of additional poignancy to watching it, knowing that an issue the film makers clearly hoped would be gone for good in 30 years would in fact still be with us 50 years on. So for all its flaws, you can’t help but respect and even feel affection for it.
Email ThisBlogThis!Share to TwitterShare to FacebookShare to Pinterest
Labels: 1967, Beah Richards, Cecil Kellaway, Isabel Sanford, Katharine Hepburn, Roy E Glenn, Sidney Poitier, Social issues, Spencer Tracy, Stanley Kramer