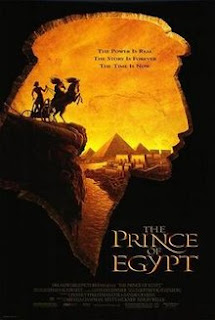 When Dreamworks Studio was put together by three Hollywood mega hotshots (Katzenberg, Spielberg and David Geffen), Jeffrey Katzenberg, former head of Disney, finally got the chance to make his animated version of The Ten Commandments. The Prince of Egypt was the first project under the Dreamworks animation label – and it was intended to beat Disney at its own game. It succeeded – so well that many people think it actually is a Disney film. Is that a good thing?

Anyway, the story should be familiar. In Ancient Egypt, Moses (Val Kilmer), the child of Jewish slaves, is adopted by Pharaoh (Patrick Stewart) as a baby after being found in the bulrushes. Moses grows up as brother to Ramesses (Ralph Fiennes) the future Pharaoh – until the shock of finding out his heritage leads him to flee Egypt. But an encounter with the burning bush (voiced again by Kilmer) gives him a new mission – back to Egypt to demand of Ramesses “Let My People Go”. Will he succeed? Well: There Can Be Miracles (When You Believe).

It helps you to believe in miracles when a film looks as gorgeous as this one does. The animation is amazing, not just because of its quality and richness, but the imagination of its images. From the framing of Pharaoh and later Rameses around the Egyptian architecture around them, to an extraordinary dynamic shot of Moses throwing his sandals from the room when encountering the burning bush, to the haunting interpretation of the killing of the firstborn, it’s brilliant. 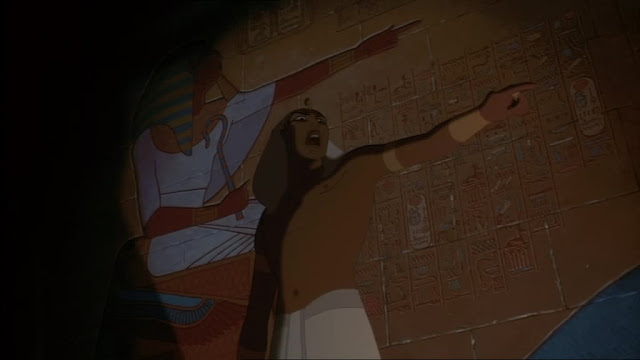 It doesn’t stop there either, with the final parting of the Red Sea awe-inspiring in its scale. But the film does equally beautiful work with the smaller, more intimate moments: each character feels real and lived in, and the film perfectly captures smaller moments of affection, love and hurt with genuine emotional force. It’s a terrifically well-made film.

And of course it has a classic story – it’s literally stood the test of time. So imaginative are the visuals – and so impressive is its scope and scale – that it almost dwarfs the DeMille style it’s quietly apeing. In fact, I’d worry whether it is a film that will have greater appeal to movie-lovers and parents than perhaps it does to children. There isn’t much in the way of humour – even the film’s nominal comic characters, a pair of cynical Egyptian priests (and near con artists) voiced by Steve Martin and Martin Short, are on the side of the oppressive baddies. There are a few decent songs in there – I rather like the Les Miserables style oomph of “Deliver Us” – and the film makes great use of the beautiful voice of the late Israeli singer Ofra Haza. But there is no getting around that this is a serious piece of film-making, with nary a comic camel in sight.

But this is no bad thing at all, and I think it stands The Prince of Egypt in good stead as it’s a film you’ll like more the older and more mature you are watching it. Not least the wonderfully complex relationship it explores between Moses and Ramesses – these two wild young men start as carefree kids (the first thing we see them do is smash up a temple building site in the film’s most cartoonish sequence, a sort of Wacky Races chariot drag race), and each become dramatically changed by responsibilities. Moses ascends to a higher plane of responsibility and humanity – but Ramesses finds himself forced into defending to the death a system of government he seemed at best disinterested in as a young man.

The film actually carries a great deal of sympathy for Ramesses. It’s in many ways a tragedy of the brother relationship between these two princes of Egypt getting shattered by events. But Ramesses is a lonely, almost needy figure, who needs Moses’ affection and respect. Ralph Fiennes mines a lot of vulnerability for this man struggling to fill his father’s shoes, who just wants Moses to chuck this whole prophet business in and go back to being his only friend. Ramesses becomes a complex, vulnerable and rather sad man – unable to deal with the pressure of his role and desperate to revitalise a lost connection with Moses, the hatred he eventually feels for his former brother born almost exclusively from rejection.

Moses isn’t quite as interesting a character – he’s more of a waster who becomes a stand-up guy – but the film successfully builds an aura about him. It struggles a bit more with those Old Testament morals: we are meant to condemn Pharaoh’s slaughter of the Jewish firstborn that opens the film, but God’s massacring of the the Egyptian firstborn (for all Moses’ discomfort with it) is presented as being primarily the fault of the Egyptians’ stubbornness.

But then that steers us into theological territory, which no animated epic for kids can really manage to set new ground with. Instead, let’s focus on the many things the film does right. First and foremost that striking visual imagery and beautiful animation, and the depth and shading it gives to the characters. The all-star cast do extremely well – even Jeff Goldblum is fairly restrained – and it’s got some great songs. It deserves to be shown as often as The Ten Commandments on the television.
Email ThisBlogThis!Share to TwitterShare to FacebookShare to Pinterest
Labels: 1998, Biblical epic, Brenda Chapman, Danny Glover, Helen Mirren, Jeff Goldblum, Martin Short, Michelle Pfeiffer, Patrick Stewart, Ralph Fiennes, Sandra Bullock, Simon Wells, Steve Hickner, Steve Martin, Val Kilmer