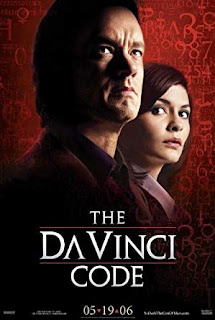 In 2003 the world went a little crazy. Maybe it was all the buzz of conspiracy that seemed to be everywhere. Maybe people wanted a bit of escapism from the misery of our post-9/11 world. Or maybe there is just no accounting for taste. But inexplicably, a staggeringly poorly written thriller by a hack author, peddling a tired old conspiracy, became one of the most popular books of all time. Yup, ladies and gentlemen, it was a time of silliness, paranoia and poor taste. It was the time of The Da Vinci Code.

When the curator of the Louvre (Jean-Pierre Marielle) is found dead in the museum, with his body covered with bizarre self-inflicted wounds and symbols, visiting Professor of Symbology from Harvard Robert Langdon (Tom Hanks) is called in to consult. Langdon quickly finds himself the main suspect and on the run, aided only by the victim’s granddaughter Sophie (Audrey Tautou in a truly thankless part of continual question asking, devoid of any agency). Following a trail of bizarre clues, Langdon ends up investigating a conspiracy that leads to the heart of the Catholic Church – could the Church be founded on a lie? Could Jesus Christ have in fact been married to Mary Magdalene? Could she have been his intended heir? Did she have a child? Has a secret society run (at various times) by the Knights Templar, Leonardo Da Vinci and Isaac Newton worked since the dawn of time to protect the secret? Of course they haven’t, but that’s not going to stop the film.

Okay let’s get the main event out of the way. This is a terrible film. But it’s not terrible for the reason you might think. I mean, sure, it’s poorly scripted bobbins, with poorly developed ciphers for characters, and it peddles a conspiracy theory which is total, illogical nonsense from top to bottom. But that’s not the main reason. The main reason this film is terrible is that it is so unbelievably fucking boring.

The film is an utterly faithful, practically scene-by-scene reproduction of Dan Brown’s book. And it immediately reveals how little Brown knows about how to write a good thriller. The film has two or three action “set pieces” or moments of tension – at least, they would be tense, if only there were any stakes to the situation, or the characters’ motivations or the peril they’re in made the slightest bit of sense. They don’t. You’ll barely remember the car chase, or any of the moments where the heroes are held at gunpoint. None of the characters have any definable personalities, other than what they are invested with by the actors playing them. But then that’s no surprise from a novel where the lead character is defined solely by being brainy, having a Mickey Mouse watch (such a character!) and (film rights pleading ahoy) looking like Harrison Ford.

Just like Dan Brown’s turgid original, this film quickly turns into a series of scenes where characters fling exposition at each other to whizz us through a series of sub-par brainteasers and anagrams, which are only solvable with information the characters have but the audience doesn’t (hardly making it a fun thing to play along with). You’ll find yourself wishing for those anagrams back though, once they move on to spunking the novel’s bizarre conspiracy theory into our ears. The low point of this is when Ian McKellen’s polio-suffering billionaire historian (a billionaire historian! Who has a private plane! Of course he does…) tees up a handy PowerPoint presentation he just happened to have sitting around ready, and regurgitates all the mystic mumbo-jumbo that the film tries to pass off as fact.

I’m sure I don’t need to recap the nonsense of this film, but seeing it boiled down from the book is a real reminder that Brown clearly read widely but with no depth. For starters, most of his understanding of everything from the church, to the Templars, to the history of Europe is bogged down in inaccuracy and misinterpretation. By the time the film is claiming that Isaac Newton’s discovery of gravity angered the church you’ll have lost all ability to take anything the film says seriously (for the record, the Catholic church didn’t have a problem with gravity, and even if they did, as an Anglican living in a Protestant country, Newton wouldn’t have given a damn anyway).

None of the film’s (or book’s) ideas are even that original – it was all spewed forth in a book called Holy Blood, Holy Grail (several characters here have names that are anagrams of the writers and editors of these books) in 1982. The idea of Jesus having a whole line of secret descendants is arrant bollocks. The idea of a secret society working to protect this secret is even more stupid (it was revealed after the publication of Holy Blood, Holy Grail to be a total hoax, swallowed whole by that book’s writers). There is not a shred of reality here – rather, it’s typical paranoia and anti-establishment bollocks repackaged as dark reveal.

This is before we even touch on the – heaven help us – “art analysis”. The dark hints of conspiracy in The Last Supper by Da Vinci boil down to: (a) there is no Grail in this painting, (b) the bloke to the left of Jesus looks a bit like a girl so must be Mary Magdelene (“a hint of bosom” McKellen tells us playfully), (c) there is an inverted triangle between Christ and this man/woman – so surely a sign of the female dominance! The fact that the painting shows only 12 disciples and Jesus – meaning that if Mary was there, it should show 14 people not 13 – isn’t considered worth mentioning. But then that’s par for the course for the film’s bullshit clues “discovered” in works of art to support the film’s bullshit, anti-Catholic agenda (the church being staffed in this film exclusively by shadowy, Bond-villain types, with a ruthless agenda for extremist Catholicism and murderous Albino hit-monks they dispatch at will). Give me a break.

But if the film had packaged this all up in a gleefully silly, high energy story, it could still have been an entertaining watch. Unfortunately, it’s completely and utterly boring. It goes on (and on) for almost two and a half hours, and in between unengaging lectures and tedious dialogue scenes it drags like you wouldn’t believe. It’s almost impossible to get engaged in anything at all, and it’s really not helped by the flat, dimly lit, for-the-money direction from Ron Howard. There is no zip or fun about the film whatsoever, as if the book’s massive popularity made the producers worried that if they treated the book like an action adventure yarn, or a fun bit of nonsense, then it might offend people. Instead they treat this nonsense with a deathly reverence usually reserved for Biblical epics that’s fatal for the viewing experience of the entire film.