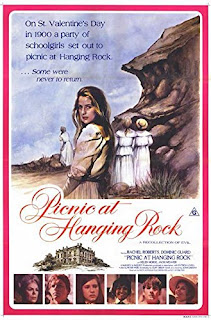 Is there any film as haunting and elliptical as Picnic at Hanging Rock? An impenetrable puzzle shrouded in mystery and wrapped in an enigma, it’s the ultimate “mood” film, where everything you understand in the film has be teased out from its sidelines and the unspoken motivations. It’s not going to be for everyone: Peter Weir tells a story on the feature-length Blu-ray documentary (longer than the film) of the response of one US distributor when he saw the film: “[He] threw his coffee cup at the screen at the end of it because he had wasted two hours of his life – a mystery without a goddamn solution!” That’s a fair comment – but accept that this mesmeric film is somewhere between mystery, hynoptic trick and ghost story and you’ll find treasure in it.

Based on Joan Livesey’s novel (which many believed to be true – a fate that also faced the film when it was released), on St Valentine’s Day 1900, a group of girls from a finishing school head to the Hanging Rock in Victoria for a picnic. Three of them (and one of their teachers) walk up to the rock and simply seem to disappear. The subsequent search by the authorities is baffling – and the impact on those left behind is brutal.

There is barely any real plot in Picnic at Hanging Rock but it’s not a film about that. It’s all about the mood, the creeping sense of menace, and the general uneasy dream nature of the story. Everything follows a woozy dream-like logic – and the atmosphere is built upon by the use of panpipe music and skilful use of classical music. Weir’s film is a masterpiece of ghostly, unsettling spookiness with the rock itself as some unknown mystical source at its centre – the first shot of the film shows it slowly appearing in the mist, as if it has somehow been transported there from some fantasia land outside of the normal.

Weir’s film became the most influential film of Australian cinema, and its tone set many of the key thematic points followed by later films of what became known as the “Australian New Wave”. It explores uneasy balances in Australia between the wildness of the country – and indigenous people’s beliefs and culture – and the social structures from the British residents who had claimed the land. Picnic also explores the beginnings of a split between long-standing Australian residents and those clinging to the upper class Brit lifestyle of the motherland. Weir’s film – with its brilliant photography – lingers on the nature surrounding the rock. Not only the rock itself, with its odd formations and strange structure, but also the animals and the environment about it. There is something unknowable, wild and untamed about these surroundings – something mankind can’t control or understand.

Weir shoots the film with a lush impressionism – everything has a hazy unreality about it – and the dreamy nature of the film is built on with the dark hints of sexual feeling bubbling under the surface. The girls are all on the cusp of discovering their own sexuality – and there are plenty of open suggestions of same-sex crushes, of growing awareness of their sexual natures among the girls. It doesn’t stop with them either – the adults are equally drawn towards unspoken desires (left very much open to interpretation). Weir gets some perfect visual representations of the stonking repression forced on top of all these feelings, not least a wonderful shot which shows several of the girls standing in a line tightly doing up each other’s corsets.

And that perhaps, it’s hinted, is what happens on the rock when the girls disappear. Trance-like, they walk towards a gap in the rock and seem to disappear. What drew them there? Lead girl Marian (a perfect performance of ethereal other-worldliness from Anne-Louise Lambert) even seems dimly aware in the opening scenes that she is bring drawn towards something. The only girl who isn’t drawn towards the mystic is more repressed, dumpy Edith – whatever the force is that calls the other girls, it leaves her panicking and screaming. What’s going on? Something dark, sinister – and you can’t help but think sexual. 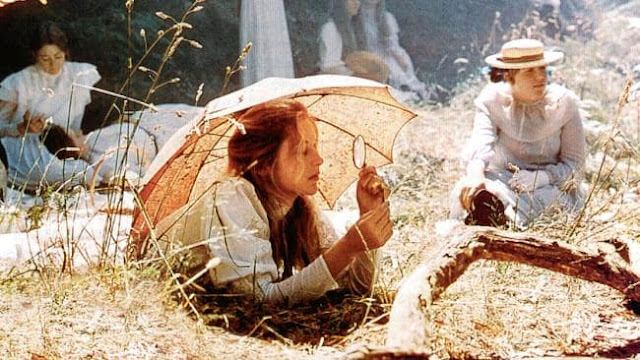 And what does that mean for those left behind? A mess. Rachel Roberts (a late casting replacement for Vivien Merchant, and famously awkward around the girls on set) is very good as the distant, draconian headmistress of Appleyard Academy (basically a sort of finishing school for posh girls). The regime she runs at the school is a mixture of oppressive and discriminate, with punishments handed out according to Mrs Appleyard’s personal feelings about the students rather than any reflection of their own behaviour. Part of the film’s story is the fracturing of her own personality that happens as response to the disappearance – her collapse slowly into a sort of paranoid insanity, powered by drink. What dark secrets is she hiding? (The film hints that she has more knowledge than she should have of at least some of the darker events of the story, but never reveals how much or indeed why.)

But then the whole cast are dealing with problems they scarcely seem to understand. There is a curious – perhaps homosexual bond – between Dominic Guard’s repressed English teen and John Jarrott’s earthy, ultra-Aussie outbacker (a very good performance from Jarrott in a character that could easily have fallen into stereotype). Perhaps that’s why Guard’s character is drawn constantly back to the rock – and also why he too seems to have such an overwhelmed reaction to it.

The sole character in the film who feels most capable of expressing their emotions is the school’s French teacher Mlle de Poitiers. Played exquisitely by Helen Morse – she gives the warmest, most engaging performance in the film – she is the only character who seems able to get in touch with her emotions, unfiltered by too much repression. Perhaps it is no coincidence that as a “double foreigner” (French among the Brits in Australia) she is less affected by the rules around her. Either way, she becomes a perfect audience surrogate, as slowly horrified and confused by the actions she sees around her in the college as the viewer is. Morse is fabulous in these scenes, from a burst of emotion when reunited with a character she thought lost, to quietly watching Mrs Appleyard’s disintegration late in the film.

But the real star is Weir’s masterful direction of the mood of this film. Like that distributor said, there isn’t any plot as such – vital events happen off screen, and there is the distinct feeling that you are only being told half the story – but despite that, the film is compelling. So much is conveyed in the mood, the tensions, the style of the film that you are invited to bring your own interpretation to events. That makes it a continually rewarding piece of cinema – it invites you to make your own answers.

This juggling of atmosphere to make something so enigmatic is so crucial to the film’s success that the recent mini-series remake effectively continued the trick (with a few extra insights into Mrs Appleyard), and contained arguably even fewer answers over its 5 hours than this did in 2. But Weir’s brilliantly made, beautifully shot, eerily unforgettable film rightly takes its place as (perhaps) the greatest Australian film ever made: it’s a film that is about Australia, and about the tensions, confusions and mysteries of that country. Brilliant.
Email ThisBlogThis!Share to TwitterShare to FacebookShare to Pinterest
Labels: 1975, Anne-Louise Lambert, Australian films, Dominic Guard, Ghost stories, Helen Morse, Jacki Weaver, John Jarratt, Margaret Nelson, Peter Weir, Rachel Roberts, Social issues