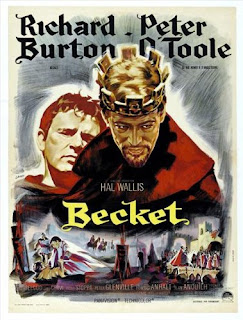 Burton and O’Toole in the same movie? There must have been a few late night benders on that shoot… You suspect actually that the backstage fun might have been just a little more sprightly and engaging than the movie itself, a lavish 1960s Hollywood Prestige film of English history. Based on Jean Anouilh’s semi-satirical play, it translates the clash between Church and State under Henry II into a very personal conflict between two men who each feel the other has let them down.

Thomas Becket (Richard Burton) is a Saxon who has risen high in the service of Henry II (Peter O’Toole) at a time when all the top jobs are held by Normans. Becket and Henry do everything together: hunting, hawking, whoring, you name it, the two of them are inseparable. But while both are sharply intelligent men, Henry is basically lazy and principally interested in enjoying life, while Becket always has a slight streak of responsibility for his people and their rights. But despite this, the two men both have England’s interests at heart and a strong friendship. So when Henry makes Becket Archbishop of Canterbury, it should work a treat, right? Well wrong, because Becket quickly begins to feel his loyalty is to the Church and God, not to Henry – and soon a debate over the legal rights of the church has blown up into a full scale clash between the two former friends. Will no one rid Henry of this turbulent priest?

Becket is a fairly sharply written, waspish play about the love/hate relationship between two men, but its themes and ideas are basically secondary to the showcasing opportunities it gives to its two lead actors. That’s pretty much what happens with this film: for all the ups and downs of the plot, the thing that really lifts this film are those two performances. Take that away and you essentially have a stately period pace, flatly and unimaginatively filmed with the look-at-the-scenery-and-costumes steadiness of other films of this genre and time. So it’s just as well that both leads are clearly having a whale of time.

Burton invests Thomas Becket with a quiet authority and a growing sense of something that, if it’s not morality, is at least a sort of moral certitude. Burton’s Becket is not the straightforward good-guy: his stances are always governed at least partly by his own pride and ambition. His defence of the Church is partly motivated by the need to secure his position, and in his career beforehand he constantly shows that he is won’t let doing the right thing damage his position at the court. But there are also touches of genuine faith throughout, and Burton plays the monologues imploring God for guidance with earnest conviction. Alongside this, he plays Becket with a great deal of wry observance and subtle wit that makes this kaleidoscopic character constantly fascinating: you never quite know what he is thinking.

Burton’s restraint also allows O’Toole more room in the more expansive role of Henry II. The powerful king – proud, controlling, intelligent and bombastic – was always a perfect role for O’Toole: indeed he would play it again four years later in another play adaptation, The Lion in Winter (becoming one of the few actors to get two Oscar nominations for the same character). O’Toole roars through the film, bringing immense energy and humour to Henry’s many scenes of intense speechifying. But what O’Toole does so well is balance this with a genuine sense of vulnerability, a genuine pain at losing Becket’s friendship. For all the power and control, O’Toole understands that Henry is essentially a very lonely man with only one man anywhere near his equal. O’Toole’s sharply intelligent, dynamic performance is a real treat.

And it feeds into the underlying theme of the film: this sense of unrequited love between the two men. Henry, for all his egotism, is clearly in love on some level with Becket: a fact that Becket seems aware of, but doesn’t quite return with the same intensity. And in fact, to double Henry’s pain, it feels like the friendship is one partly driven by Henry’s position rather than something genuine between the two men – Becket is always more guarded and more critical as a companion. Though of course that is fair enough: Henry is, however good-naturedly, a supreme ruler who cares little for the welfare of the Saxons under his rule, happy to help himself to attractive women from the peasantry if he wants them. But then perhaps it’s Becket’s very distance, his certain level of speaking truth to power, that makes him so appealing to Henry: when Becket is around, Henry has competition for smartest guy in the room.

There is a lot going on between the two leads, so it’s not surprising that much of the rest of the film doesn’t get a look in. For the other performers, John Gielgud landed an Oscar nomination for his two scenes (barely five minutes) as an arch and manipulative King of France, while Donald Wolfit is all puffed-up pomposity as Becket’s church rival. But the film is only focused on the two men and their political rivalry, so the context is always sketched in quickly, and the energy drops out of the film noticeably when they are apart. The film wants to frame the rivalry so much as a personal one that it doesn’t develop another interest in the political issues – so when scenes are obliged to focus on this, you feel the film starting to drag.

But that might also be because Anouilh’s play is famously historically inaccurate. For starters, Becket wasn’t Saxon, so his early lack of social standing makes no sense. The Constitutions of Clarendon (historically the reason for the falling-out in the first place) don’t merit a mention. Henry’s wife Eleanor of Aquitaine is presented as a shrew rather than one of the most intelligent women of the era, while Henry is also shown to be on poor terms with his mother, again contrary to the truth.

But that stuff all stems from the play, and in the end it hardly matters as the film is positioning itself as the tale of a friendship turned sour between two men. O’Toole and Burton are sublime, and if the direction and film-making around them is pretty pedestrian (although the film looks great and has an impressive score) it doesn’t really matter in an actors’ piece like this. Most of what is good from the play is carried over to the film, and the dialogue and speeches are often very strong. It’s a very stately and rather overlong play that doesn’t really keep the momentum up. But it’s still enjoyable, still has plenty to admire and even if it’s overlong and dry, it gives you performances that really sing.
Email ThisBlogThis!Share to TwitterShare to FacebookShare to Pinterest
Labels: 1964, British Films, David Weston, Donald Wolfit, Felix Aylmer, Historical epics, John Gielgud, Martita Hunt, Pamela Brown, Peter Glenville, Peter O'Toole, Richard Burton, Sian Phillips