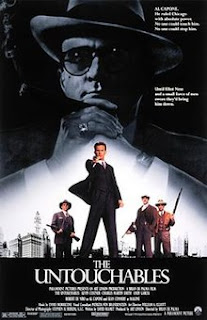 “What are you prepared to do!”

It’s the motto of this electric law-enforcement film, one of those all-time classics that provides endlessly quotable lines and moments you can’t forget. It’s crammed with iconic moments, from its brilliantly quotable dialogue from David Mamet, via its wonderful music score, to its artful film literacy and iconic performances. If there is an untouchable film, this one is pretty close. I love it.

It’s 1930, prohibition is in full force and Chicago is ruled by gangland kingpin Al Capone (Robert De Niro). Young Federal Officer Elliot Ness (Kevin Costner) is thrown into Chicago to end Capone’s reign and stamp out the illegal liquor business. Not surprisingly, it’s hard to know who to trust in a town as stinking as this one, until a chance meeting with disillusioned beat cop Jimmy Malone (Sean Connery) helps him find a group of people he can trust – “Untouchables” who aren’t going to go on Capone’s payroll. But to bring Capone down he’s going to have to embrace the “Chicago way” and start to bend his strict moral code.

Listening to Brian de Palma talk about the making of the movie, you can’t help but suspect he felt he was doing one for the suits rather than one from the heart. Well perhaps he should do that more often, because The Untouchables is a lean, mean, hugely entertaining action-adventure, that plays with genuine ideas and but also nails every single moment. Every scene is shot with a confident, compelling swagger – the sort of thing that reminds you what a conneseur of high-class pulp de Palma can be. The Untouchables plays out like a super-brainy graphic novel adaptation, and every scene sings. There is barely a duff moment in there.

A lot of this comes straight from David Mamet’s brilliant script. Really, with lines like this, moments as well-crafted as this, characters as clearly, brilliantly defined as the ones on show here, you can’t go wrong. Quotable lines fall from the actors’ lips like the gifts they are: “He brings a knife, you bring a gun. He sends one of yours to the hospital, you send one of his to the morgue. That’s the Chicago Way!” It’s dialogue like this that just has ageless appeal, the sort of stuff you find yourself trying to work into day-to-day conversation.

But Mamet’s script is also sharply clever. It swiftly lays out at the start Ness’ moral compass, his code – and then, as the film progresses, it cleverly shows the whys and wherefores for Ness compromising these. Needless to say, the man at the end of the film is totally different from the bright-eyed naïve agent we met at the start. Mamet also brilliantly works shades of grey into all our heroes, while scripting some compelling moments of grandstanding bastardy that an actor as marvellous as De Niro is just waiting to send to the back of the net.

De Niro was of course the inevitable choice as Capone. Bob Hoskins was contracted just in case De Niro said no (when told De Niro would be taking the job but he would get a $20k pay-out for his time, Hoskins told de Palma he’d be thrilled to hear about any other movies de Palma didn’t want him to be in), but it had to be Bobby. The film drops Capone in at key moments: the film opens with the swaggering bully delighted at holding court with English newspapers while being shaved (de Palma’s camera draws down from an overhead shot, like a spider descending from the ceiling, to reveal him in the barber’s chair) – a flash of danger emerges when the barber slips and cuts Capone’s face (de Niro’s flash of fury, followed by his decision to pardon – combined with the barber’s terror – is perfect). Later Capone rages at Ness, hosts a very messy dinner party with a baseball bat, and weeps at the theatre while a key character bleeds to death at his home (a brilliant example of de Palma’s mastery of B-movie cost cutting). He’s the perfect dark heart.

And opposite him you need a white knight – even if it a white knight who is set to be sullied. I’m not sure Kevin Costner ever topped his performance here, in the film c that made him a superstar overnight. Looking like the perfect boy scout – his fresh faced earnestness is one of his finest qualities – Costner also has a WASPish hardness under the surface. The burning determination he has to destroy Capone, his disgust at the murder and chaos Capone deals in, is never in doubt – just as his initial naïveté about how to end Capone is all too clear. Costner masterfully shows how each event pushes Ness a step or two further in bending his rules, to fight Capone’s ruthlessness with ruthlessness of his own. “What are you prepared to do!” Malone asks him, and the film is about Ness working out how far his moral compass can stretch. I can’t think of many films that so completely and successfully have the lead character change as much as Costner does here without it feeling rushed or forced. It’s a wonderful performance.

But the film is stolen – and it’s no surprise, as he has the showiest part, most of the best lines, and of course the movie-star cool – by Connery. It’s easy to mock Connery’s blatantly Scottish Irish cop – he gives the accent a go for his first scene, but promptly drops it. What Connery’s performance is really all about is an old dog who never got a chance to do the right thing, finally being given the licence, the support and the inspiration from the younger man to clean up this filthy city. And Connery rages in the film, a force of nature, the perfect mentor, the cop who against all initial expectations is prepared to go through any and all risks to get Capone. He’s the samurai beat cop, and Connery (Oscar-winning) growls through Mamet’s dialogue with all the love of the seasoned pro letting rip. It’s an iconic performance – and led to a five year purple patch of great films and roles for Connery.

But the film works partly because of these great performances and the script, but also because of de Palma’s direction. The pacing is absolutely spot-on, the camera full of moments of flash and invention. Every action sequence has its own distinct tone, from the horse riding hi-jinks of a Canadian border interception of a booze truck, to the dark slaughter late at night of one of the film’s main characters (a masterful, Hitchcockian piece of genius by the way that uses the POV shot to exceptional effect). A late roof chase sizzles with a ruthless energy.

But the real highpoint of the action is of course that famous train-station shoot out. Allegedly the original plans on the day had to be ditched due to budgetary reasons – so cinephile de Palma pulled a sublime Battleship Potemkin homage out of his locker. Shot in near silence, save for gunshots, the bounce of a pram falling down the station stairs (baby on board) and a spare score from Morricone, the sequence is true bravura cinema, both hugely exciting and strangely endearing for all those who know anything about the history of cinema.

De Palma and Mamet keep the story focused, clear and every scene has a clear purpose and goal. There isn’t a single superfluous character or moment. Everything is perfectly assembled to serve the overall impact of the film. It’s gripping, entertaining and compelling: the sort of film where if you catch it at the right age it has you for life. Ennio Morricone’s operatic score is perfect for the film, underlining and emphasising every moment and effectively sweeping you up. Costner and Connery are superb, De Niro is perfect, the film is a gift that has something new to give every time you see it.
Email ThisBlogThis!Share to TwitterShare to FacebookShare to Pinterest
Labels: 1987, Andy Garcia, Brian de Palma, Charles Martin Smith, Crime drama, Kevin Costner, Patricia Clarkson, Robert De Niro, Sean Connery, Thriller