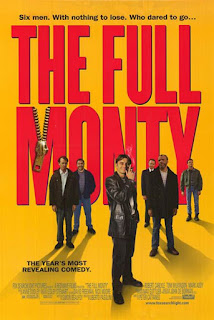 In the summer of 1997, Britain was a depressed place. The country was in the middle of an intense mourning for the death of Princess Diana. Perhaps that’s why a film all about overcoming despair and to turn it into heart-warming triumph suddenly gripped the whole nation and emerged from nowhere to become the most successful British film of all time. No one expected a film about Sheffield strippers to do that.

The economy has dropped out of the Sheffield steel market, and hundreds of people are out of work and desperate. Gaz (Robert Carlyle), a genial waster, needs £700 to pay his child maintenance and not lose access to his son Nathan (William Snape). Dave (Mark Addy) has serious self-image problems, his disgust at his own weight is leading him to push away Jean (Lesley Sharp), the wife he can’t believe loves him. Gerald (Tom Wilkinson), their ex-foreman, is so ashamed of losing his job he hasn’t told his wife that he’s been unemployed for six months and is facing financial ruin. Together with three other men with no other options, they decide one way to get money quick is to follow the example of the sell-out male-strippers at the local working club – with the unique selling point that they will go “the full monty”.

It’s been nearly a decade since I saw The Full Monty. Over-exposure made it an easy film to feel a bit sniffy and dismissive about, like it was a happy accident that the film came from nowhere to achieve staggering success. But that’s hugely unfair. Watching it back now, it’s amazing how much it’s a comedic film grounded in a sense of desperation and pain, and then how brilliantly it uses this to create empathy for its characters, and how wonderfully this helps you to share their joy and triumph when they are finally taking control of their own destinies.

The Full Monty emerged from a troubled production history. It was hugely difficult to find funding for the film. It took years to get the filming sorted, and casting was difficult – in a parallel universe Nicholas Lyndhurst and Russ Abbott played the lead roles. Robert Carlyle has described the making of the film as being totally chaotic (he further claimed he was convinced the film was “pish” and heading for disaster). The first cut was met with such negativity from the distributors that it nearly ended up direct-to-video, until the producers begged for one more shot at editing the film. But then it emerged as one of the most widely loved UK films of the 1990s, eventually being nominated for four Oscars (Picture, Director, Screenplay and a win for Best Score). That’s what I call a turnaround!

It’s also strangely fitting for the film itself. The opening footage showing a prosperous and bustling Sheffield in the 1960s is a perfect set-up for the Sheffield of the 1990s with unemployment rampant, and our characters confined to endless days of drifting around the city and failing to gain any benefits from a workshop at the unemployment office. Every frame of Cattaneo’s well shot film stresses the relative bleakness of the environment, the run-down world the characters inhabit, and that sense that all promise is missing from the future of this city.

In the middle of this, the film doesn’t shy away from looking at – with plenty of jokes – plenty of themes which are hardly your default expectations for a comedy movie. We’ve got depression, self-loathing, body-image, fathers’ rights and suicide: if that’s not a comic gold on paper I don’t know what is!  However, what is so perfect about the film is how well it judges the tone when dealing with these themes. Simon Beaufoy’s script is warm, humane and above all immensely empathetic. Never – not once – are any of these characters the butt of the humour. While we may see the dark comedy that can occur, we never laugh at the characters. 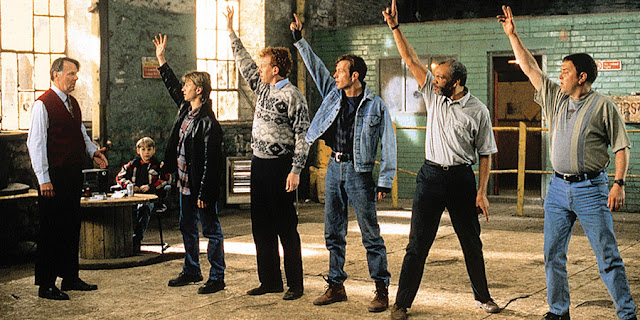 The script gets a perfect balance between all this desperation and pain and well-worked, down-to-earth, honest and affecting humour. It’s also genuinely funny, with several stand-out gags. As an interesting side note, perhaps the film’s most famous comic moment – the boys standing in the dole queue, involuntarily practicing their routine when Hot Stuff starts playing in the radio – nearly didn’t make the film, as the producers felt it was unrealistic. Just as well they left it in, as it perfectly captures the mood of the movie.

On top of which, the film taps into the human bonds that can grow in adversity. One of the film’s principal delights is seeing this odd bunch slowly begin to come together like a family. We see them confide in each other, listen to each other’s problems, accept each other for what they are. It’s a film about the triumph of the human spirit and the rewards that can come from opening your heart to other people when all seems lost.

It further helps that Simon Beaufoy’s script draws such terrific performances from the actors. Carlyle (for all his doubts about the film) plays Gaz with a perfect, low-key, commitment and empathy. Carlyle in many ways makes the film work as well as it does because he plays the truth of each scene and is willing to be the film’s loadstone. He plays every moment truthfully and is as effective showing Gaz’s chancer wasterness as he is at allowing the real pain and fear Gaz feels at the prospect of losing his son.

The film also changed the careers of Addy and Wilkinson, turning the two into character actor superstars. Addy is fabulous as the self-loathing Dave: having had problems myself with being concerned about my own image, seeing the psychological damage Dave inflicts on himself through his own inadequacies is very moving, and perfectly played by Addy – who also brings a great deal of comic mastery to the film. Wilkinson is perhaps the pick of the bunch as the seemingly proud and haughty Gerald, who hides intense fragility and pain under the surface. He has a truly affecting breakdown scene after a job interview gone wrong – and the reaction acting to this from Carlyle and Addy is also by the way marvellous. It’s a terrific (BAFTA winning) performance.

And then you hit the final stripping scene – and all that empathy the film has been building pays off, because the triumphal dance and strip down is hugely heart-warming. After seeing the men go through such difficulty and despair it’s really affecting and joyful to see them finally take control of their own destinies. How could you not be wrapped up in it? How could a whole nation not take the whole thing to their hearts? Put out of your mind all those thoughts that this can’t be that good, or that we were all mistaken in 1997: this is genuinely very good, thought-provoking and hilarious stuff.
Email ThisBlogThis!Share to TwitterShare to FacebookShare to Pinterest
Labels: 1997, British Films, Comedy, Emily Wooof, Hugo Speer, Lesley Sharp, Mark Addy, Peter Cattaneo, Robert Carlyle, Social issues, Tom Wilkinson