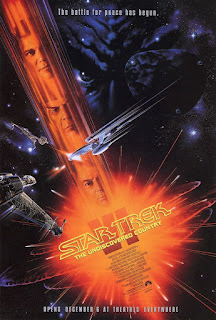 This will sound ridiculous, but there are few films that have had such an impact on me as Star Trek VI: The Undiscovered Country. How bizarre is that? But not only can I trace my love of all things Trek to this film, but it was also my basic introduction to Shakespeare, whose plays in various shapes and forms have been a big part of my life ever since. Throw into the mix that it sparked an interest in the Cold War and you’ve got quite a coup for this sixth film in (I’ll be honest!) a hit-and-miss franchise.

This film follows the final mission of Kirk (William Shatner) and company. There has been a disaster on the Klingon moon Praxis, which has devastated the Klingon economy and left them with no choice but to enter peace negotiation with the Federation, to try and end the Cold War that has existed for generations between the two powers. Sound familiar? While Spock (Leonard Nimoy) has been one of the leading negotiators with Klingon Chancellor Gorkon (David Warner), Kirk is reluctantly roped in to provide an escort for the Klingons to a peace conference. Kirk, and many of his crew, are weighed down with decades of prejudice and suspicion of Klingons (attitudes that erupt in a tense dinner between the Enterprise crew and many of the equally suspicious Klingons). Kirk and McCoy (DeForest Kelley) however find themselves in trouble when Gorkon is assassinated and the two men are arrested and put on trial by the Klingons. Will Spock save them? Can they save the peace talks? Time for one last adventure.

Star Trek VI very nearly didn’t happen. The previous film, written and directed by Shatner, was a disaster, a messy, strange, flat-footed, cheap-looking adventure that was a huge flop, won several Razzies and nearly killed the series off. So it’s great that the cast got a chance to have one final swan-song in their parts – and that this basically turned into the most intelligent film they had made since Star Trek II. No surprise that Nicholas Meyer, an articulate, literate and intelligent novelist turned film-maker, was the common link between them. Not weighed down by Star Trek lore, nor the breezy “I’m above this” contempt that other directors in the series have had, Meyer understands what makes good Trek – a strong story, compelling character arcs, intelligent writing and a good balance between adventure and themes that resound with contemporary depth.

Star Trek VI was written as the Berlin Wall fell, and it’s a neat commentary on the sort of attitudes you would have seen in America and Russia at the time. Gorkon’s name even echoed Gorbachev (and Lincoln as well). But this isn’t just a historical parallel with the modern world. Instead Meyer also uses this to explore the attitudes of his characters. Like Star Trek II, this works into a neat deconstruction of Kirk’s persona. Kirk has to confront not age here (as in that film) but instead his own out-of-step anger, prejudices and refusal to change. At the same time, the film also explores Kirk as a man who can overcome his instinctive hostility, to make himself a better man. It’s such rich complexity that it’s no wonder I got sucked into a life-long love for Star Trek.

All this makes a fabulous framework for the strongest, most high-stakes entry in the franchise. Meyer’s direction is spot on: simmering with tension in the first half, investing every scene with a creeping intensity and rumbling sense of disagreement. He also works brilliantly with the regular cast, who turn in some of their best performances in this film: Shatner in particular reins in (mostly) the ham for a thoughtful and intelligence performance, while Kelley mixes deadpan snarks with a world-weary resignation. Nimoy also goes further than he has for a long time with Spock, who struggles under the surface with a host of emotions, from hope, pride, guilt and fury all bubbling away under that cool Vulcan façade. The rest of the cast also get moments to shine.

This is a film that barely puts a foot wrong in its entire first act. From the opening explosion of Praxis – with a hugely exciting sense of danger as Sulu’s Excelsior starship gets caught up in the shockwave – through to the trial of Kirk and Bones, this film is tonally spot on. We understand completely the hostility and distrust Kirk feels towards the Klingons, just as we appreciate on a deeper level his desire to make the peace talks work. The awkward encounters with the Klingons simmer with an unspoken racism from the Federation characters (many of the cast reported being uncomfortable with the imperialist and superior tone their characters had to take), and a hostile resentment from the Klingons. The eventual assassination attempt has a grim inevitability about it, but is expertly shot and edited (a zero-gravity assault by two assassins on Gorkon’s disabled ship). The show-trial itself is like a nightmare of injustice. It’s scintillating and compelling stuff.

While the pace does slacken slightly when Kirk and McCoy find themselves in a Klingon prison camp – we are, by the way, introduced to the prison camp via a speech from the commandant eerily reminiscent of the greetings handed out in Bridge on the River Kwai – it never loses the audience’s attention. And it powers back up for a brilliant all-action, at first totally one-sided, fight between the Enterprise and a Klingon ship en route to the peace conference. A large measure of the film’s atmospheric success should also be given to the extraordinary score by Cliff Eidelman, a brilliant combination of familiar themes and fast-paced orchestral work, one of my favourite film scores.

And Shakespeare? Where does he come into it? Largely through Christopher Plummer, playing General Chang, the man who emerges as principal antagonist. Plummer’s exuberant performance is perfect for this larger-than-life warrior – a man who loves nothing more than reading Shakespeare “in the original Klingon” (one of many examples of the film’s wit). Plummer lets rip throughout the film, quoting endlessly from virtually every Shakespeare play you could imagine, just this side of ham. Plummer is also, for my money, the best villain this series had. But how could you not love a film where the villain rotates round in his command chair shrieking gleefully “Cry havoc and let loose the dogs of war!” Or says farewell to Kirk early on with a cheeky “we have heard the chimes at midnight…”. It’s possibly the best introduction to how great Shakespeare is that you can have.

But then that’s just part of Meyer’s witty, literate script, which throws in quotes from Conan Doyle and JM Barrie to Adlai Stevenson and Neville Chamberlain, and has Spock tells Kirk he’s the perfect choice for a mission to the Klingons as “there is an old Vulcan saying: only Nixon can go to China”. With stuff like that how can you not enjoy the film? It also understands the warmth between the main cast, their sense of character. The whole film combines an elegiac tone with a triumphant final mission, the passing of an era – with the final moments of the film capturing this, from its Peter Pan quote (“First star to the left and straight on until morning”), to the signatures of the cast appearing on the screen, literally signing off on their Star Trek careers.

The whole film is perfectly pitched like this. Every moment works from the off, and the action and adventure is balanced by some wonderful comic moments and beats of high tension and drama. The film’s use of the Cold War in Space as a backdrop works really well, and sheds a new light on attitudes in the franchise that have never really been touched before. It’s well acted, directed with flair and skill (the final space battle is brilliantly assembled), and the score is fantastic. There is a reason why I inflicted this film on my best man and ushers the morning before my wedding: it’s got a special place in my heart and it always will.
Email ThisBlogThis!Share to TwitterShare to FacebookShare to Pinterest
Labels: 1991, Christopher Plummer, David Warner, DeForest Kelley, George Takei, Kim Cattrell, Leonard Nimoy, Nicholas Meyer, Science fiction, Star Trek, William Shatner