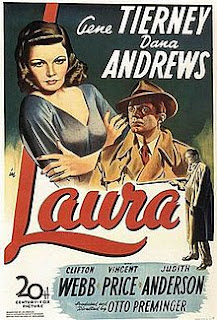 Laura is the sort of film noir that on the surface gives you what you would expect, but actually shakes its formula up pretty successfully. The femme fatale starts the film dead (although anyone who has seen a mystery will be expecting a twist when we hear a shotgun has destroyed her face beyond recognition). The detective does very little detecting, and engages in hardly any police business. One of the lead suspects is allowed to tag along to every interrogation to spray witty barbs around. There are only four potential suspects and barely any other characters. The solving of the mystery often takes a back seat to flashbacks and character beats. When the reveal comes, it feels like it’s been hiding in plain sight the whole time. But yet it really works.

Laura Hunt (Gene Tierney) is a leading female advertising executive found murdered in her apartment. Detective McPherson (Dana Andrews) is called in to investigate, with the suspects being: Walso Lydecker (Clifton Webb), a waspish newspaper columnist who was her mentor; Shelby Carpenter (Vincent Price), a parasitic southerner, sponging off Laura’s success; and Ann Treadwell (Judith Anderson), a matriarch who may or may not be conducting an affair with Shelby. But is all as it seems? Well of course it isn’t, and as McPherson gets more obsessed with Laura, so does the mystery of her murder deepen.

Otto Preminger took over the direction of Laura mid-way through the production, after the rushes of the original director (Rouben Mamoulian) underwhelmed. Preminger repackaged the film as a sort of part-thriller, part-shrewd black comedy, and gave huge scope to Clifton Webb’s hugely enjoyable performance as the waspish Waldo, a turn that totally dominates the film. Clifton Webb’s arch performance is a complete delight, and the film plays subtly with Waldo’s sexuality. Introduced in a bath with a typewriter, like some gossipy Marat, Waldo is heavily implied to be at least ambiguous in his sexuality, a dandy about town with more knowledge about clothing and high society than the initial ingénue Laura.

To be honest, watching it today, Waldo is so clearly a possessive creep – a preening, domineering personality who takes an obsessive pleasure from “owning” Laura – that you’re far less likely to be surprised to find he has a considerable dark side than many of the viewers of the original film. For all the witty barbs he throws about – “Haven’t you heard about science’s latest invention, the doorbell?” he snaps at an welcome intrusion from MacPherson – Waldo remains part comic delight, part intensely black-hearted weirdo. It’s a line Webb’s performance walks extremely well. 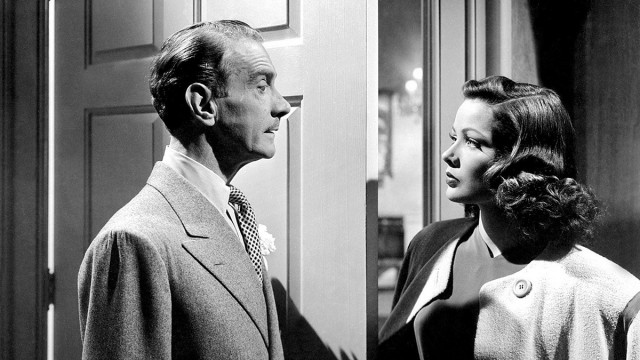 It does mean that there is very little room in the film for Andrews and Tierney as the film’s two leads. Laura is the presence that hangs over the film – quite literally at times, with many scenes taking place in her flat, beneath an enormous portrait of her. But despite this, she becomes less and less interesting as the film progresses. Essentially, Gene Tierney is so striking looking as the lead – and the build-up she gets from Waldo in particular is so extreme – that her acting can’t quite live up to the presence. The character is possibly the least well written of the film, an enigma that we never quite get into – or feel inclined to try.

McPherson is a far more interesting part. The film suggests (indeed Waldo says it outright) that McPherson is falling hard for the victim. There is a wonderful sequence where McPherson stays overnight in Laura’s apartment, moving through the flat, rearranging things in her rooms, drinking her whisky then settling into a chair and starring up at her painting before going to sleep. It’s like a date with only one person there. McPherson gets a very personal investment in the case – so it’s a shame that he’s played so flatly and boringly by Dana Andrews, a serviceable sort of B-list film noir lead who brings no spark to the part at all.

The two leads can’t compete with Webb, or the playful performances in the supporting roles from Price and Anderson. Preminger gets the tone just right with these big performers, playing both characters just on the edge of satire. Price is languidly dry, delighting in his gauche lack of interest in other people and his selfishness. Anderson is a strangely needy matriarch, a woman hiding her need for the interest of a younger man, archly proud but slightly tragic. Throw these colourful performers at the edge of the picture and it’s not hard to lose interest in the two leads – especially as they are playing characters so different from what you expect from these films.

The mystery itself is not too much of a puzzle. There are two or three twists in there, two of which I was able to predict and the third one I didn’t pick up on some early signposting (including in the opening lines). But the enjoyment here isn’t from the puzzle but from the colour that it’s put together with. Preminger stages the whole thing like a jet black comedy and mixes it with plenty of gorgeous film noir lighting. The story is slight but staged with real energy and dynamism – you can’t believe how swiftly it flies by. The film probably has more sympathy for the eventual murder than a modern audience will feel – but that’s no big deal. Well written, spicily played by the supporting cast and well directed, you can see why this is one of the classic film noirs.
Email ThisBlogThis!Share to TwitterShare to FacebookShare to Pinterest
Labels: 1944, Clifton Webb, Dana Andrews, Dorothy Adams, Film noir, Gene Tierney, Judith Anderson, Murder mystery, Otto Preminger, Vincent Price