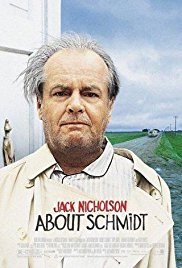 When you think about About Schmidt, it’s almost impossible not to think about Jack Nicholson. For so long Nicholson has been JACK, a personality so large, so present in the public conscious as the ultimate raging lothario, that most of his performances have been unable to escape it. He has blasted through so many films as a force of nature that what’s almost most surprising about About Schmidt is that Nicholson is so feeble, worn-out, uncharismatic and beaten down in the lead role. Did I also mention he was brilliant?

Nicholson is Warren R Schmidt, a recently retired actuary with an Insurance company in Omaha. As a young man he dreamed of a golden future, but his life has been one of crushing mundanity and boredom (albeit, I will say, clearly very well paid!). Schmidt has become a cowed, average, hollow man – the sort of man who urinates sitting down because his wife insists he does so and whose idea of defiance is to pop out for a milkshake. After his wife (June Squibb) suddenly dies, he is forced to deal with the fact that he is actually largely estranged from his idealised daughter Jeannie (Hope Davis) and that he despises her decent-but-no-hoper fiancée Randall (Dermot Mulroney). Can he make her abandon the wedding?

Alexander Payne has excelled in this style of film: a slightly off-centre social comedy with a mix of a lemony sharpness, satirical wit and genuine warmth for its characters. He perfectly captures the hopes and dreams of small-town America and the trap of mediocrity and disappointment that these sort of suburban, unremarkable lives can have. About Schmidt does this brilliantly, by counterpoising the Schmidt’s feelings of depression and being trapped with the clearly empty dreams of his daughter’s would-be husband. Not to mention taking shots at the overbearing try-too-hard irritability of Randall’s bohemian family (who seem to celebrate the very failures Warren believes his life has been made of).

Payne works in perfect synchronicity with Nicholson, keeping all the actor’s OTT gestures and mannerisms well in check and pushing him to create a quiet, timid, worn-out man who is beginning to reflect (with some bitterness) on what his life has been and been to suspect (with some dread) what it might be for his daughter. Nicholson’s comic timing and his sense of empathetic sadness are both absolutely perfect. The film uses a brilliant device to let us hear Schmidt’s inner monologue via his writing a series of letters to the African child Ndugo he is sponsoring (hilarious in that he unleashes on this no doubt uncomprehending young boy a series of bitter, reflective and sad cries from the heart).

The film is about the disappointments of life, but each point is told with a dark or wry humour. From Schmidt’s retirement party (an event that everyone seems to attend only out of duty) to the death of his wife (who collapses mid hoovering) there is a dark sense of humour throughout. Nicholson plays these moments with a world-weary sadness that keeps the character grounded. At other moments, he can let rip with a more overt comic touch as he struggles with the distaste and alarm he is far too polite to show as he stays with Randall’s bohemian family (Kathy Bates is very good as the matriarch of this clan, a woman whose laissez-faire attitude is a front for her tyranny).

The film’s plot is brilliantly simple, and is fundamentally about how far Schmidt can go in re-evaluating and re-claiming his life, giving his final years (with his actuary head on he believes he has between 10-12 years left) some sense of individuality. These attempts rotate from sad starry-night imagined conversations with his late wife to awkwardly comedic encounters with a nice couple at a camping site, whose signals he completely misreads. Schmidt is angry – and those moments when it bursts out to Ndugo are hilarious – but as much with himself as anyone else. After all, who do we have to blame more than ourselves?

Schmidt isn’t even a bad guy. He’s spot on about Randall, a decent enough guy but a hopeless businessman and incompetent chancer. A large chunk of the film’s final act hinges on us knowing that Schmidt is right, knowing that is daughter is making a huge mistake, but also knowing that we’d be as powerless about it as Schmidt is. Because the film, in its darkly comic way, is saying that nearly all of us are on this treadmill – and that nearly all of us can see that others are as well – but we can’t do anything about it or help them get off. We can only watch the gears shifting on.

It’s a brilliant, thought-provoking film, very funny in places – and Jack Nicholson gets to remind us all that he a marvellous, clever and subtle actor, in one of his finest performances since the 1970s. Nicholson’s control and likeability are vital to making Schmidt someone whom we warm to and pity, even while he frustrates. And Payne’s wonderfully directed, empathetic story illustrates a life of tragedy without meaning and dreams, but never scoffs at those who lead them – instead it’s only wistfully sad for what might have been.
Email ThisBlogThis!Share to TwitterShare to FacebookShare to Pinterest
Labels: 2002, Alexander Payne, Comedy, Dermot Mulroney, Hope Davis, Jack Nicholson, June Squibb, Kathy Bates, Len Cariou, Social issues