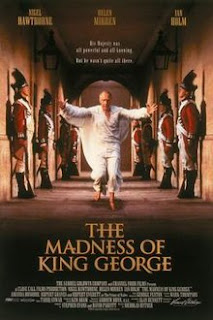 Alan Bennett’s The Madness of George III allegedly changed its name for the film adaptation because producers worried American audiences would feel they missed the first two films in the series. It’s not actually true, but it was a lot of free publicity for Nicholas Hytner’s film debut – a marvellous, accomplished and brilliant theatrical adaptation that will always take a firm place on my list of favourite films. It’s an excitingly well-made, hilarious and heartfelt film that captures forever Nigel Hawthorne’s greatest ever performance.

In 1788 King George III (Nigel Hawthorne) is still fuming over the loss of “the colonies” (the film front and centres talk of the plucky United States, to help sell the film in the land of the free) and the behaviour of his ambitious oldest son George (Rupert Everett). Happily married to his wife Queen Charlotte (Helen Mirren), and the father of 15 children, George is a stickler for form and duty. So imagine the shock of his ministers when his behaviour becomes impulsive, irrational and finally obscene. With the king talking non-stop and impossible to control, the Prince of Wales schemes to become Prince Regent. Desperate, the king’s ministers call in Dr Willis (Ian Holm), a professional doctor of the mad, who claims he can (with time) cure the king. But will it be in time to prevent the regency?

Nicholas Hytner has rather charmingly claimed that he knew so little about film-making he didn’t realise the difficulty of many of the things he asked for, and if he had known he would never have asked. He gives much of the credit to the seasoned pros working on the film pulling out the stops to give him what he asked for. The end result is a brilliantly paced, lusciously filmed epic that is both a wonderfully moving personal story of a crotchety but lovable monarch and a witty look at regency politics. Several scenes are shot with an imaginative brilliance, from shots that throw themselves into the middle of scuffles at court with the unbalanced king, to sweeping landscape shots that make it look like the thing cost millions of dollars.

The other advantage of bringing in Hytner (director of the original stage production) was his brilliant understanding of Alan Bennett. Bennett’s script is superb, crammed with sensational lines and brilliant jokes that never get in the way of the humanity. Bennett is always more than radical than his cosy reputation suggests, and King George is a witty deconstruction of the purpose of the Royal family (politicians frequently comment on their pointlessness and George defines it as “smile and wave” and to act as “a model family”). It’s got a great understanding of the frustrating waiting game of long-serving heirs (being Prince of Wales “is not a position, it is a predicament”). The film even lands a cheeky gag at the end with the suggestion that the King’s condition was hereditary.

Hytner’s film uses the trappings of royalty brilliantly, contrasting them to great effect with the later degradation of the king – in an inspired moment, George’s first “enthroning” in the restraint chair Willis uses to condition him into behaving is soundtracked to Handel’s Zadok the Priest. George’s court is an uptight, staid place where people can’t relax (or even sit – George is so adamantly opposed to people sitting in his presence even a heavily pregnant woman is not exempt during an interminable bell-ringing version of Handel). George is a constrained figure – so it’s no wonder his insanity displays itself as an increasingly loose-lipped lack of inhibition.

The question of madness is richly handled. As Willis says, many of the mad consider themselves kings, so what does a king fancy himself as? And how can you tell what is normal for a king anyway? George is an eccentric from the start – and even his recovery at the end is basically eccentricity with an element of self-control rather than a full recovery. The film never shies away from making you invest in the rough treatment the king undergoes to wrestle him back to sanity. The doctors get short shrift, either incompetent or scheming (“When will you get it into your head that one can produce a copious, regular and exquisitely turned evacuation every day of the week and still be a stranger to reason” Geoffrey Palmer’s wonderfully dry Warren tells a toilet-obsessed colleague). 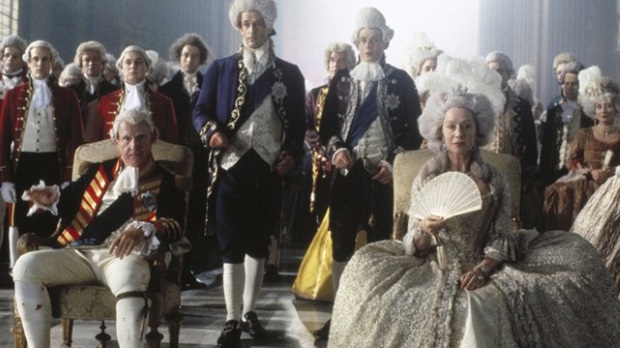 The film is slightly more confused about Willis. Strongly played, with a twinkly chippiness, by Ian Holm (who is just about perfect) the film can’t quite decide if Willis is responsible for the king’s recovery or not. It’s a battle of wills, but is Willis ahead of his time or as medieval as his colleagues? Does Willis’ aggressive conditioning (punishing bad behaviour with restraints) force the king back into sanity? Or is it George’s love of his wife that provides the final push? Or is the king naturally on an upcycle where madness expresses itself in eccentricity rather than incoherence? It’s not clear (maybe this is deliberate) but Willis’ regime of punishment and reward has a slight air of quackery.

What’s pretty deliberate was Bennett and Hytner’s insistence that only Nigel Hawthorne could play the king. Thank god they did, as Hawthorne is simply brilliant. Cheated of the Oscar in 1994, Hawthorne is compelling. He also conveys the natural authority of a king, and the “grumpy old man” side of the king is mined for brilliant comic effect. But it’s also a beautifully heartfelt and hilarious performance, running the gamut from delight in obscenities to teary fury and fear at the treatment from his doctors and loss of mental control. Such a sublime performance.

And it surely inspired some top work from the brilliant cast around him, many of whom revived their roles from the stage production (chief among these Wadham’s wonderfully dry Pitt).  Helen Mirren is warm, proud and eventually desperate as Charlotte, while Rupert Everett mines the Prince of Wales for all the comic pomposity and childishness he can. Rupert Graves is excellent as a loyal equerry, while John Wood, Jim Carter and Geoffrey Palmer also excel. You’ve rarely seen such a strong cast of British stage notables, and it’s not surprising they were attracted to perform in a script that has as many good lines as this one.

It’s accomplished and luscious, is brilliantly shot and designed, and is packed full of wonderful sequences. It wears its intelligence lightly, with George as a proto-Lear struggling to hold onto his marbles. The characters even sit and read Lear at one point (“Is that wise?” questions Thurlow. “I had no idea what it was about” says the little-read Willis). George may recover his wits in time, but it’s unclear whether this makes him more or less of a human being. In many ways at the height of his insanity, he’s a warmer, friendlier person (if out of control), then he is as his buttoned-up, stickler-for-duty self.

The Madness of King George is the sort of film all theatre adaptations wish they could be, brilliantly cast, opening out into something that not only feels compelling to watch but also brings out the great depths of the original play. What is monarchy for? How can we tell if the all-powerful are mad or not? What is sanity anyway? All this and with some superb jokes, and a story that really involves you. With Nigel Hawthorne’s simply brilliant performance at the centre, this is one for the ages.
Email ThisBlogThis!Share to TwitterShare to FacebookShare to Pinterest
Labels: 1994, Amanda Donohoe, British Films, Geoffrey Palmer, Helen Mirren, Ian Holm, Jim Carter, john Wood, Nicholas Hytner, Nigel Hawthorne, Play adaptation, Rupert Everett, Rupert Graves