1988 wasn’t a vintage year at the Oscars, so perhaps that explains why this functional film ended up scooping several major awards (Picture, Director, Actor and Screenplay). Rain Man is by no means a bad film, just an average one that, for all its moments of subtlety and its avoidance of obvious answers, still wallows in clichés.

Charlie Babbitt (Tom Cruise) is a cocksure car dealer (he’s Cruise to the max) whose latest deal is spiralling down the toilet when he hears his father has died. Charlie had long since cut all links to his father, so he’s not surprised to be left only a car. But he is intrigued the money has been placed into a trust – and is shocked and furious to discover he has an autistic brother Raymond (Dustin Hoffman) he never knew about. After essentially kidnapping Raymond in order to claim his share of his father’s fortune, the two end up in a cross country road trip where Charlie slowly learns more about Raymond and their shared past and begins to soften in his view of his brother.

Rain Man is basically the sort of movie where two characters go on a road trip and have a personal journey of discovery, offering the sort of twists and character developments that are only really going to be surprising to someone who has never seen a movie before. But despite that, it does do something interesting, avoiding the standard Hollywood cliché of Raymond discovering depths or learning to overcome part of his condition: he is basically the same at the end of the film as at the beginning.

Instead all the change and journey is in Charlie Babbitt. The film carefully and unobtrusively develops Charlie over the course of the film so that he evolves away from the selfish, greedy yuppie we first encounter, who seems incapable of building emotional links with the people around him. Instead, as he learns to care (in every way) for another person, he also discovers reserves of love and a yearning for connection in himself that he never knew he had before.

This all sparks off his interaction with Raymond – and his growing acceptance of Raymond for who he actually is, rather than who he wants him to be. This happens slowly – and Charlie can intermix tenderly teaching Raymond to dance with using him to count cards in Las Vegas – but you can plainly see the difference in his character from his reactions when he says hello to his girlfriend earlier (flirtatious but distant) with how he greets her when they reunite later in the film (warm, loving and open). It’s a gradual but very natural development shift that is the real heart of the film.

This works due to a terrific performance from Tom Cruise. Cruise has possibly never been better than he is here. His role is not about glamour or flash, but about carrying the narrative and emotion of the story. Cruise is sensational, quietly carving out a gradual and intelligent character development over a period of time that avoids all the flashy tricks and obvious “emotional” moments you expect. Cruise isn’t afraid to be unlikeable either at points in the story. 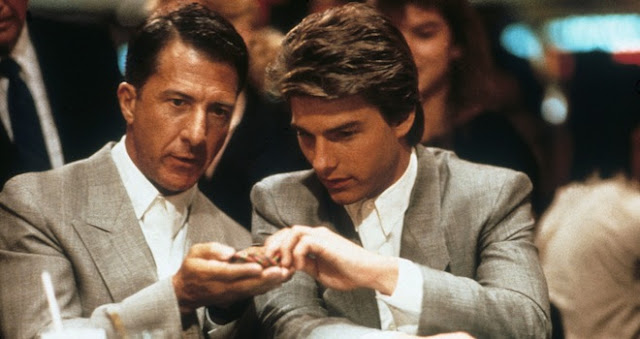 That’s what the real emotional connection with the viewer is in this story, and that’s the real arc that the film captures. However it’s Dustin Hoffman who attracted the real plaudits for his performance as the autistic Raymond. Interestingly Hoffman was initially tapped for the role of Charlie, but quickly worked out Raymond was the flashier part.

Hoffman’s performance is a masterpiece of virtuoso transformation, and his capturing of the quirks and mannerisms of an autistic man are perfectly done. He convinces utterly. But, by the nature of the character, there is no real emotional or character work here. The performance is one that is largely a collection of extremely successful mannerisms. It’s rather like watching an expert juggler successfully juggle twenty things for over two hours. Hoffman doesn’t drop a single thing, but it’s a series of actor tricks rather than a complex acting performance of emotion and character.

Rain Man did give an insight into autism for many in the 1980s for the first time. Its influence may perhaps have been too great – it’s now become almost standard for an autistic savant in movies to be a maths genius with amazing memory – but in the film, it’s carefully structured to serve as a starting point for Charlie to begin to see Raymond as a human being rather than an object. The film itself sets out a similar stall, encouraging the viewers to see those with autism as people with their own feelings – however much they struggle to understand or express these, as Raymond does.

What it does very well is to subtly and sensitively explore Raymond’s situation. The medical professionals in the film are never demonised (as they so easily could have been) but are as concerned about Raymond as Charlie becomes. Raymond and Charlie discover they have a closer bond that both seem barely able to express – even Raymond seems to become, at least, used to Charlie’s presence enough to let him touch him. The film shows Raymond however can only progress so far – there is no miracle cure, and no out of character outburst of empathy.

Rain Man works best when it focuses on subtlety – and has an outstanding performance from Tom Cruise – and it has a well filmed simplicity to it. But it is a slight tale, directed with a functional professionalism by Barry Levinson that never really manages to stand out from several other movies very similar to it. It has a certain warmth and emotionality to it, but deep down it’s nothing really that special – just a more subtle version of a story we have seen several times before.
Email ThisBlogThis!Share to TwitterShare to FacebookShare to Pinterest
Labels: 1988, Barry Levinson, Best Picture, Dustin Hoffman, Road movie, Tom Cruise, Valeria Golino