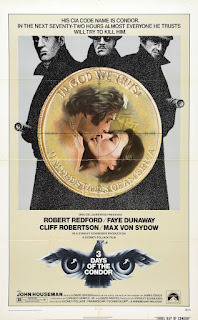 Three Days of the Condor never leaves you in any doubt that the real villains are those in power – and the possibility of escaping the reach of organisations like the CIA is beyond all of us. Condor is damn well-made though – Pollack’s direction is nearly faultless in its taut claustrophobia – even if the film itself gets a bit lost in its confusing obliqueness.

Joseph Turner (Robert Redford) is a quiet, boyish, Robert-Redfordish academic whose job is to read books published all over the world and report back to the CIA any familiarities with any secret operations past or present, or any good ideas from operations. One day, while out fetching lunch for his colleagues, he returns to find they have all been murdered by a hit-team led by a shadowy foreigner (Max von Sydow). Calling in the CIA, he finds he can’t trust anyone – and is forced to hide out by kidnapping a woman, Kathy Hale (Faye Dunaway), whom he bumps into in a shop.

Three Days of the Condor opens with an electric pace. The build-up to the assassination of Turner’s co-workers is extremely tense, while the immediate after effects – and Turner’s lost, confused terror – is brilliantly involving. The stream of conspiracy-laced events, and the unsettling lack of security about who to trust creates a terrific mood of paranoia. Pollack’s editing is tight, and the photography keeps the action naturalistic and eerily involving. It creates an unsettling drama where no one can be trusted.

It taps perfectly into that 1970s vibe of the state being omniscient and inhumane – Turner’s CIA contact will only talk to him using his code name, shows no human interest in his deceased comrades and only asks if Condor himself is “damaged”. Later Turner chippily asks why a senior agent is addressed by his name, while he is only called Condor.

Redford is very good as Turner – perfectly convincing as the bookish man thrust into circumstances where he is out of his depth, but whose innate abilities to think fast and adapt allow him to believably keep one step ahead of those pursuing him. The film has a love for the grimy Le Carre-ish detail of espionage, which it mixes well with its James Bondish elements of hitmen, violence and sex. The script has good lines, and several excellent set-pieces that trade in that queasy feeling of being out-of-depth.

The momentum of the first half however eventually gets bogged down in the “working out” of the conspiracy. This is a bit hampered by the early acts of the movie being focused more on atmosphere than on plot build-up. With the exact purpose and function of Redford’s CIA role only really being loosely explained quite late on – and the various inter-relationships of the assorted CIA bigwigs we see also not really being that clear – the final reveal of the wrong uns is murky and doesn’t quite justify the build-up.

Part of this is the film’s 1970s vibe – its sense that the resolution is, in a way, less important than the downer atmosphere and conspiracy tension – but it’s also a bit of a narrative flaw. It’s hard to invest in a story that never really gets put together or explained properly, and doesn’t really give us a sense of the major stakes at play or the reasons why various characters do what they do.

Other factors also have dated the film, principally the relationship of Faye Dunaway’s Kathy and Redford’s Turner. Now there is an odd Stockholm syndrome relationship if ever I saw one. From Kathy tearfully fearing rape and assault for most of the first ten minutes of their screen time together – and with no reason to believe the story Turner is peddling – sure enough within a few hours of knowing each other this pair end up in bed together. The film attempts to suggest Turner’s ability to understand her personality (in a way no-one else ever has naturally) through her photographs brings them together –but nevertheless it’s basically a hostage falling into bed with her kidnapper, about 20 seconds after she stopped crying, after he has just released her from being tied up and gagged in her own bathroom.

I guess it helps when your kidnapper looks like Robert Redford – and the film uses Redford’s innate trustability well – but it’s a little unsettling. Kathy swiftly becomes Turner’s little helper – but you never really get a sense that the she is an actual character, or that the film even really needs her that much. Dunaway is a good actress and plays the part very well – but there is an unsettling submissiveness and even exploitation to her character that dates the movie (not that we have moved past films where female character’s principal role is to have sex with the hero to ease his pain). The best you can say for this character is that she has “pluck”.

It’s dumping Turner down into Kathy’s home where the momentum leaks out of the film slightly. It’s a film that feels like it’s going to be set-up as a chase movie with a spy tinge, but it never really turns into that. On top of which, it takes time away from properly developing Turner’s enemies. His possible CIA opponents, led by Cliff Robertson and John Houseman, don’t really come into focus as characters. The performer who does stand out – largely because of the wry world-weariness he brings to the role – is Max von Sydow as the hitman Joubert, a character I’d happily see more of (where was his spin off?). 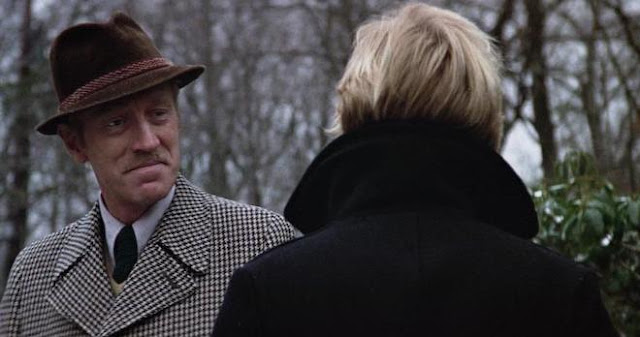 Three Days of the Condor is a well-made triumph of atmosphere – but the later sections of the film don’t quite live up to the build-up, and the film doesn’t quite snap together as much as you would like in the second half. It gets lost in its labyrinthine schemes and then doesn’t have a resolution that seems interesting enough to make satisfying narrative sense.  It’s got some great moments in it, but it’s a flawed film.
Email ThisBlogThis!Share to TwitterShare to FacebookShare to Pinterest
Labels: 1975, Addison Powell, Cliff Robertson, Conspiracy, Faye Dunaway, John Houseman, Max von Sydow, Robert Redford, Spy thrillers, Sydney Pollack