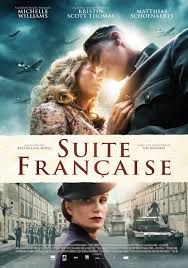 The story behind the writing of Suite Française is compelling. Living in Nazi-occupied France, Irène Némirovsky began work on a five-novel series, Suite Française, which she intended to depict life in her homeland under German rule. She had only written two of the five books when she was arrested by the Gestapo as a Jew, and tragically died in Auschwitz. The books were written in a small notebook and kept by Némirovsky's daughter while she moved from hiding place to hiding place evading the Nazis. Sixty years later, donating her mother’s papers to an archive, she deciphered the notebook and discovered the novels. They were published as a single volume to great success in 2004, regarded as an accomplished piece of literary fiction and a remarkable work of contemporary witness.

The short summary of the novel’s richness and complexity provided by this film can’t really compete. Based on the second of the two novels, the story takes place in a small French village in 1940. Following the arrival of the Germans, officers are billeted in people’s homes: Lucile Angellier (Michelle Williams) and her mother-in-law (Kristin Scott-Thomas) are assigned sensitive musician Bruno van Falk (Matthias Schoenaerts), while their neighbours, farmers Benoit and Madeleine (Sam Riley and Ruth Wilson), are forced to accommodate bullying officer Kurt Bonnet (Tom Schilling). As hostilities between the French residents and the German occupiers grow, so does the attraction between Lucile and Bruno, but Bonnet’s pursuit of Madeleine threatens to ignite the simmering tensions in the community.

Suite Française manages to turn its promising material into a conventional, chocolate box wartime romance – you can’t help but think that it does a great deal of disservice to the original novel. It’s filmed in an unremarkable style (there are at best 1-2 imaginatively done shots and sequences) and poorly paced. With its short runtime (barely more than an hour and a half), it constantly feels rushed. Quite simply it’s a story about simmering tensions in a confined environment – it needed more time for us to get a sense of the drama building, of the resentments between the Germans and the French growing. Because the film is so short we don’t get that at all.

Most notably, in a film about a romance between a French woman and a German officer, there is no sense at all of the risks that French women who started relationships with German officers were running. Besides a few small throw away lines, there is no sense of the physical danger and the social stigma that would be applied to these women. Instead, the tension of Lucile falling for Bruno seems to be based more on whether her mother-in-law will discover that she’s considering cheating on her (absent, unfaithful) husband. Even Celine the promiscuous farmgirl (a wasted Margot Robbie in a terrible wig) doesn’t seem to be running any risks of reprisals from the villagers when she’s banging a German officer in the woods.

This, however, is where the film’s rushing undermines it. If it had allowed us to develop a sense of the resentment, shame and loathing the occupied French felt for their German oppressors, a feeling of the whole town being willing to close doors on anyone they perceive as being too close to the  Germans, we could have felt a real danger for Lucile in flirting with a dalliance with Bruno. As well as giving the situation a bit of stakes, it would have made it a lot more emotionally engaging too. We could have witnessed her inner conflict at considering a romance with the enemy, and the emerging feelings between them would have had the conflict of a forbidden love. Instead the film rushes us as quickly as it can towards getting Bruno and Lucile into a passionate clinch, at times taking giant unsupported leaps forward in their relationship, so when it arrives it packs no punch.

This passionate clinch undermines the film. If it wasn’t going to take the time to really build the relationship through lingering glances and brief moments, convincingly charting the journey from hostility and suspicion to a forbidden attraction, it should have cut the relationship down to being something that tempts them both but which they cannot express. Have these two recognise a deep bond between them, a bond that in another time would have brought them together but cannot in the time of war. It’s a film where the only physical contact between them should feel like a window on what might have been – not a passionate locking of lips and sexy fondle or two. Think how much more affecting that might have been.

It would also have fit the structure of the film far better. As Lucile finally finds herself having to choose a side – deciding whether to help a renegade hunted by the Germans or not – her decision to sacrifice her chance of love with Bruno might have worked much better. Similarly, Bruno having to revert to the soldier taking responsibility for the growing persecution of the villagers would have been more affecting. (It further doesn’t help that the film doesn’t give time for Williams and Schoenaerts to build up an effective chemistry.) By chucking them into a clinch as soon as it can, the film undermines its message and also manages to make itself feel more like “Mills and Boon in Occupied France” than the serious tragedy it could have been.

When the film finally focuses on the battles between the French and Germans in its final third, it’s much more interesting than the slightly tired romance. Here we get tensions, stakes, drama – and finally a sense of the danger that being in this situation could have. After the rather soft focus romance that comes before, it really seizes the attention.

Williams does a decent job as Lucile, Scott Thomas could play her austere mother-in-law with hidden depths standing on her head (the film fumbles the unexpected alliance between these characters late on). Schoenaerts is a bit wasted in an underwritten role but does good work. The best performances largely come from the second tier: Lambert Wilson is excellent as the local Viscount who wants to try and work with the Germans but quickly finds himself out of his depth. Harriet Walter is similarly strong as his wife, as is Ruth Wilson.

But Suite Française could have been so much better than the movie that it actually becomes. A film that focused on the dangers of occupation and the tensions of a small community would have been great. A film that rushes through a Romeo and Juliet style romance, without building the sense of forbidden love, is a film that just doesn’t work.
Email ThisBlogThis!Share to TwitterShare to FacebookShare to Pinterest
Labels: 2015, Alexandra Maria Lara, Harriet Walter, Kristin Scott Thomas, Lambert Wilson, Margot Robbie, Matthias Schoenaerts, Michelle Williams, Ruth Wilson, Sam Riley, Saul Dibb, Tom Schilling, World War Two