Fantastic Beasts and Where to Find Them (2016) 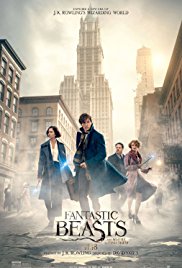 Eventually the gravy train had to come to an end. The Harry Potter franchise laid golden eggs for over a decade, until Rowling’s books came to an end. Just as well then that the incomparable JK Rowling had tonnes of invention left up her sleeve, and was keen to look at other elements of the Potterverse. So we got the creation of this sideways prequel, set in the rich backstory of the Harry Potter novels. And it is a bit of a treat.

In the 1920s, Newt Scamander (Eddie Redmayne) arrives in New York with a suitcase full of fantastic beasts. He’s there to return one of them home – but after a mix-up at a bank his suitcase ends up in the hands of muggle (or as the Americans put it “No-Maj”) and would-be baker Jacob Kowalski (Dan Fogler). As the escaped beasts cause chaos, demoted Auror Tina Goldstein (Katherine Waterston) works with Newt and Jacob to try and recapture the creatures, with the aid of Tina’s mind-reading sister Queenie (Alison Sodel). But is all the destruction truly caused by Newt’s creatures? Or are there darker forces at work?

Fantastic Beasts is a charming spin-off, sustained by some endearing performances, its warm heart and stylish design. Whether the plot is quite strong enough to reward constant viewing as much as many of the Harry Potter films do, I’m not sure (I didn’t find its story particularly gripping the second time around), but I think there are enough incidental pleasures there to keep you coming back for more. It’s actually a film which will be interesting to re-evaluate after the later sequels emerge – there are many suggested threads set up in this one for exploration later.

It’s not a surprise that the initial plot around chasing and collecting the beasts is fairly basic, since it’s based on a slim handbook (itself based on a reference from the original Harry Potter stories) that Rowling published as a Comic Relief fundraiser. Besides the chasing around to capture the animals, it’s only really the backdrop for sight-gags, cute animals and (most importantly) our window for getting to know our leads.

And these leads are certainly well worth getting to know, with a string of excellent performances from the four principals. Redmayne anchors the film very well as the slightly dotty, professorial, socially awkward Newt, whose coy, bashful charm really endears him to the viewer. Dan Fogler is possibly even better as our viewer surrogate, an average New Yorker thrown into a mad world of magic who somehow manages to take it all in his stride and whose growing excitement and embracing of this demented wizard world makes you fall in love with him. He’s helped by a sweet, gentle and touching romance with the effervescent but lonely Queenie (a magnetic Alison Sudol). Katherine Waterston gets the trickiest part as the earnest, try-hard, play-by-the-rules Tina – but her growing fondness for Newt and his creatures works very well.

The moments of the film that focus on the interaction between these four are the finest of the film – as are those that allow us a glimpse of Newt’s wonderful creatures. Housed in a Mary Poppins-ish suitcase of infinite TARDIS-like depth, these beasts are brilliantly designed and wonderfully individual, from a cute mole-like Niffler (naughtily stealing shiny things like a magpie), to a horny Erumpent (like a hippo and rhino mixed), to the majestic Thunderbird, a sort of Eagle-Phoenix, soaring through the plains in Newt’s suitcase. Even the small Bowtruckle Newt carries in his pocket gets to develop a sense of personality. (And yes I had to look all these names up).

These creatures are both individualistic but also used for very specific purposes in the film, from lock-picking to a sort of bizarre self-defence weapon. Despite their horrific appearances, the film treats them with as much understanding sweetness as Newt does – even the dangerous ones are only dangerous when riled or threatened, and Newt’s protective nature helps us to feel as fond of them as he does.

Away from the beasts, the film largely focuses on setting up threads (and threats) for future films. A major sub-plot revolves around an anti-Magical society run by a stern-faced Samantha Morton. The film heads into darker territories here, with its references to both cults and the ill-treatment of children. Ezra Miller does well as Morton’s awkward, ill-treated adopted son, unable to escape from his oppression or express his frustration. Someone in this family is a powerful magical being called an Obscurus, and the film plays a neat game of bluff and double bluff around this.

It continues this game as it fills out the political magical world around Carmen Ejogo’s regal magical President. What game is Colin Farrell’s authoritarian Perceval Graves playing? What of the film’s opening references to dark wizard Grindelwald, and the suggested war that is bubbling under the surface in the magical world? All this darker stuff sits around the edges and margins of Newt’s beast-collecting storyline, occasionally seeping in (let’s not forget at one point Newt and Tina are literally sentenced to death for supposed crimes), but doesn’t overwhelm the lightness.

David Yates directs with a professionalism that comes from being hugely familiar with this world. His later sequences of Obscurus destruction are not always particularly different from other city-smashing scenes from other films. Not every plotline feels fully explored – Jon Voight playing a newspaper mogul and his two contrasting sons seems like a plot we could do without – but Yates does keep the film moving pacily forward, he gets the tone of light slapstick and family warmth and he still shoots the wonder of magic better than almost anyone.

Fantastic Beasts is a film that is perhaps a little too light and frothy to really be a classic – it juggles too many plots and doesn’t always bring them together well. It’s mixture of darkness and lightness is a little eclectic, and it sometimes feel very much like a film designed to set up future films effectively. But when it focuses on its four leads, it’s very strong indeed and all of them – particularly Fogler – are people you want to see more of. It even manages to end the film on both a genuine laugh and a heart-warming bit of romance, tinged with sadness. It’s a fine start to a new franchise.
Email ThisBlogThis!Share to TwitterShare to FacebookShare to Pinterest
Labels: 2016, Alison Sudol, Carmen Ejogo, Colin Farrell, Dan Fogler, David Yates, Eddie Redmayne, Ezra Miller, Harry Potter, Johnny Depp, Jon Voight, Katherine Waterston, Ron Perlman, Samantha Morton