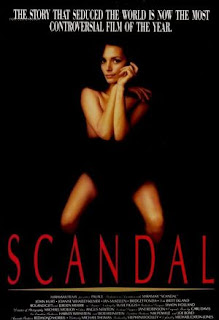 In 1963 the British Government was nearly destroyed by a sex scandal. John Profumo, Minister for War, was widely suspected of conducting an affair with Christine Keeler (a former show girl turned society figure) at the same time as she was sleeping with Russian naval attaché Eugene Ivanov. Profumo denied it to the House of Commons. A few weeks later he confessed he had lied and resigned from Parliament. The scandal shook the country to the core, and led to an exhausted Harold MacMillan’s resignation as PM. As the scandal span out to reveal sex parties in country homes, the country couldn’t get enough of the discovery that large numbers of the upper classes enjoyed nothing more than swinging, orgies and indiscriminate sex laced with sado-masochism.

Scandal reconstructs the build-up to and eventual explosion of controversy around this affair, focusing on Keeler (Joanne Whalley) and Stephen Ward (John Hurt), the society osteopath and friend to the rich and famous who had worked out that if he found and coached attractive young girls, Henry Higgins-style, into engaging and fun companions, he could swiftly move up the social ladder by giving the rich and powerful people they could sleep with. When the Profumo affair blew up, it was Ward who was left holding the parcel: abandoned by his rich and powerful friends, Ward was placed on trial as a pimp, vilified in court and in the press, and eventually committed suicide the night before the court case finished (which convicted him in absentia of living off immoral earnings).

It’s this miscarriage of justice that Scandal zeroes in on – and the film does a good job of showing that Ward basically didn’t really do anything that wrong. He didn’t mistreat the girls, he thought he was helping them improve their lives and he didn’t attempt to blackmail his friends. His own sex drive seems curiously disconnected (he was clearly more of voyeur) and if anything, John Hurt (excellent as always) plays him as a slightly sad social-climber. A sort of Horace Slughorn of sex, far more excited by his bulging address book, access to the exclusive clubs of London and calling lords of the land by their matey nicknames, than by all the nooky.

Scandal however is a rather unemotional, unengaging and distant film. It’s hard to get too wrapped up in, as it too often goes for documentary checklist rather than real character engagement. On top of that, it’s often rather unclear – it’s tricky to tell the exact timelines, it’s hard to see often how some events relate to others, it’s unclear in particular how Christine Keeler’s relationship with jazz promoter and drug dealer Johnny Edgecombe led to exposure. It’s a film that’s both in love with telling the facts and so blinded by them that it doesn’t turn them into an engaging story.

But then perhaps part of this is because looking back today, it’s hard to see what all the fuss was about with the Profumo affair. After generations where government ministers have been accused of everything from toe-sucking to performing a sex act on a dead pig, it’s hard not to look at the Granddaddy of all government sex scandals and not think it rather quaint. Today it would barely merit more than few news cycles: and Profumo would certainly have been back in the cabinet within two years. Even the spy angle (was Profumo leaking secrets to Keeler, who in turn leaked them to Ivanov?) was widely (and almost immediately) discredited at the time.

Not that the seismic impact really comes across anyway in the film. This is partly because the film focuses on Ward and Keeler in particular. For the two of them, there wasn’t much at stake – until their lives were destroyed. In fact, for most of these people at the various dodgy parties – other than embarrassing tittle-tattle – there wasn’t much at stake. A film that gave more space to Profumo – and really made-clear what he was running the risk of losing here, particularly after he lied to Parliament – might have made it clearer the dangers that all involved were inadvertently running.

But that would have been to dent the film’s purpose of showing Ward and Keeler as essentially innocents abroad. Joanne Whalley has a particularly difficult job as a Keeler so thoughtless, short-sighted and self-obsessed, she verges on the dim. Whalley makes her bright, engaging and fun-loving, but never with a whiff of sense. By the time Keeler is blurting out totally unconnected Profumo facts when speaking to the police about her relationship with Edgecombe, you can tell she doesn’t have a chance.

The film’s real strength though is John Hurt’s masterful performance as Stephen Ward. Hurt’s pock-marked face and ruddy complexion (going through a difficult divorce he allegedly spent most of the filming struggling with alcoholism) and slightly sweaty desperation are perfect for the role. A natural victim as an actor, he makes Ward always slightly desperate, always trying too hard, always the grammar-school boy pushing his nose up against society’s window. He’s a super creepy Henry Higgins grooming girls for a “better life” (his genuine belief!) and getting himself an entrée into posh society at the same time.

Ward, the film argues, didn’t feel he was ever doing anything wrong – and he realises far too late that society, his posh friends and the government don’t agree. “It’ll blow over” he reassures Ivanov: totally wrong. Ward basically was a hedonist who wanted people to have a good time – and was thrilled to be invited to the party. When the shit hit the fan, he was dumped with the blame. It’s an angry note that the film – with its obsession with covering so much ground – fumbles slightly: it wants to be a searing indictment of the hypocrisy of the upper classes, but it fudges the emotional connection so much that you can’t feel it as much as you should. 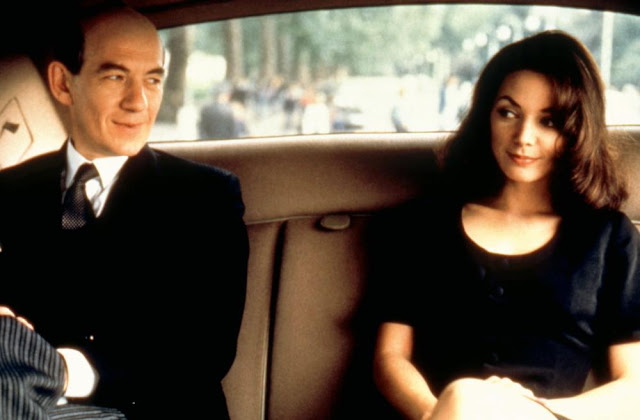 There is some decent directing – a scene of Mandy Rice-Davies and Christine Keeler preparing for a night on the town is particularly well done – and some strong acting, not least from Ian McKellen is a slimy Profumo (rumour has it a recently de-closted McKellen was keen on the role as it was the most hetrosexual role he could imagine playing!). But it never quite clicks together into something really emotionally engaging. And it isn’t quite as clear and easy to follow as you need. Structuring the story as a kind of love story between virtually the only people in the story who don’t have sex together is interesting – and Hurt and Whalley are good – but it’s just not quite a good enough film for what it wants to do.
Email ThisBlogThis!Share to TwitterShare to FacebookShare to Pinterest
Labels: 1989, Bridget Fonda, British Films, Britt Ekland, Daniel Massey, Ian McKellen, Jeroen Krabbé, Joanne Whalley, John Hurt, Leslie Phillips, Michael Caton-Jones, Political dramas