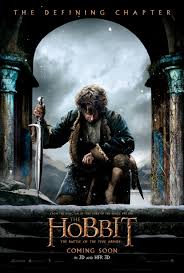 I feel like I’m running out of things to say about this desperately flawed trilogy – but here we go… Peter Jackson finally finishes his great contractual obligation, serving up another film that expands out a slim couple of chapters of a children’s book into something that strains so heavily for the feel of something epic and world shattering, it feels like a constipated man struggling on the loo.

We’ve finally made it to the Lonely Mountain. Smaug is killed by Bard (Luke Evans) during his attack on Lake Town, while Thorin (Richard Armitage) seizes control of the fortune under the mountain. However, the mountain now becomes a struggle point between the dwarves and their allies: Bard and his people and Thranduil (Lee Pace) and his elves, who are all looking to gain control of its treasures. While Bilbo (Martin Freeman) attempts to make an increasingly maddened Thorin see sense, Gandalf (Ian McKellen) brings warning of an imminent attack by an army of Orcs – will this mutual enemy bring our heroes together at last?

The Battle of the Five Armies is the moment where you knew this sprawling, sausage-fest of a trilogy had lost what soul it had. Almost the entire runtime is given over to battle sequence, seems to go on forever and ever with no respite. We see a host of clashes that carry none of the poetry of The Lord of the Rings, and a host of characters we don’t really know fighting with each other. Frankly, it’s hard to care. It looks great, but it’s just empty spectacle, sound and fury signifying absolutely nothing at all. In fact, it’s all so unclear that watching this movie for a third time I still have absolutely no fucking idea what this battle is even about! What are the Orcs doing? Why are they attacking?

As always character moments are constantly sacrificed. The dwarf company are ruthlessly trimmed of screen time–even Ken Stott’s Balin doesn’t get much of a look, bizarre as he’s been established previously as Thorin’s confidant. Apparently James Nesbitt nearly wept when he saw this film – not surprising since he must barely be on screen for more than five minutes. Crucial moments that should make us care about these characters are constantly lost: Thorin’s descent into madness occurs completely off camera, Gandalf’s struggle to keep the peace gets glanced over, Bilbo nearly gets completely lost in the shuffle from special effect to special effect.

Tragically, far too much screen time is given to two characters Jackson has parachuted into the film. Weaselly Lake Town official Alfrid is given seemingly endless scenes of “comic relief” – a shame since he’s about as funny as being hit in the mouth by a hammer. I understand Jackson must find this character funny, and that he felt some comic relief was needed amongst all the fighting – but quite frankly he’s wrong. Alfrid is not funny – I think you’d go a long way to find anyone who liked him – and secondly if they needed comic relief characters, why not let one of the dwarves fill that function rather than introducing a new character 2/3rds of the way into the story? 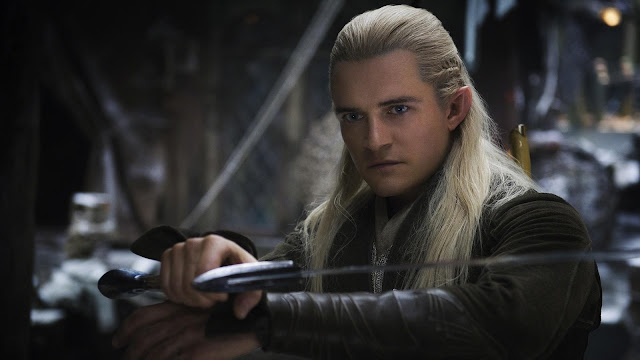 The second character who gets far too much to do is our old friend Legolas. The elf’s plot line is given never-ending minutes of screen time, his struggles and conflicts given (it feels) even more screentime than Bilbo’s. Do we really need to see Legolas searching for the orcs? Do we really need to see him doing ridiculously impossible feats in the middle of combat? Are we given any reason to care about him at all, other than the fact we remember him from Lord of the Rings?

Legolas’ inclusion demonstrates almost everything wrong in this series. Did Jackson include so much of him because he didn’t need to think quite so much about what to do with the character, being already so familiar with him? When Legolas (at best a secondary supporting character in the story) has his battle with some random Orc, intercut (and even prioritised in the edit) over Thorin’s climactic battle with Azog, the clash the entire trilogy has been building towards, you know something is seriously wrong.

On top of which, Legolas’ inclusion undermines Jackson’s other big invention, the Legolas-Tauriel-Kili love triangle. Really this should be a Tauriel-has-to-marry-Legolas-but-wants-to-marry-Kili structure – that at least would work, right? We’d understand her struggle and division – and it would add a lot more weight to her feelings for Kili. Instead, Jackson is worried this might make Legolas look unsympathetic – so instead Tauriel is sorta in love with both with them, a confused, messy structure that makes no real sense. To add insult to injury, when Tauriel and Kili are threatened by random nasty Orc, who saves the day? Legolas. Who fights Tauriel’s battles for her? Legolas. Jackson introduces a love triangle, and then undermines it because he doesn’t want to criticise his beloved character. He introduces a female character, only to reduce her to a victim obsessed with lurve. It’s a disaster.

You feel Jackson threw in this plot because not a lot actually happens in this movie. Doubly annoying then that so many plots we do care about disappear so swiftly. The Arkenstone, the cause of so much struggle, is completely forgotten half-way through. The fate of Bard and the Lake Town survivors is glossed over. The dwarves get benched from the action for ages. The plotline around the Necromancer is wrapped up with embarrassing and confusing swiftness. Thorin’s plotline is rushed together at the edges, with the focus constantly on getting more fighting in shot.

It’s a real shame that the actors don’t get the time they deserve to really let their performances flourish. Armitage is, as always, superb as a Thorin who loses himself in greed and desire for gold, and becomes cruel and bitter before remembering his nobility. Martin Freeman is still great as Bilbo, honest, normal and delightful despite being given little to do. Ian McKellen still has all the Gandalf qualities of wisdom and grandfatherly authority. Among the rest of the cast, Luke Evans continues to be a stand-out as the noble Bard.

There are moments of action that really work. Smaug’s attack on Lake Town is the film’s dramatic highlight – shame its over in 12 minutes. But it’s brilliantly shot, has moments of heroics and looks great. Thorin and Azog’s battle really works because Thorin is just about the only character in the film we really care about. But much of the rest of the fighting is just silly – gravity-defying bashing (Legolas and Saruman are particularly guilty of this) or never-ending struggles in the battle itself – in which by the way, only men seem to be allowed to be seen doing anything brave.

The Battle of the Five Armies is in many ways a fitting conclusion to the series. Millions of dollars are spent on making a brilliantly designed and shot series of images. But no time is spent on making us care about anything. We invest almost nothing emotionally in the story at all. While we might be a bit sad at seeing people die, we know so little about many of them their deaths hardly stick with us. Why did Jackson not see this? Yes Lord of the Rings was a masterpiece and tough act to follow – but when you see the love and care dripping from every frame of that 12 hour trilogy, and then you move to this mess, you can’t help but think: where did it go wrong? It’s not a complete disaster – the films are always watchable – but they could have been so much more. Instead, they’re the bloated, incoherent footnotes to a great trilogy.
Email ThisBlogThis!Share to TwitterShare to FacebookShare to Pinterest
Labels: 2014, Aiden Turner, Cate Blanchett, Christopher Lee, Evangeline Lilly, Fantasy, Ian Holm, Ian McKellen, Ken Stott, Lee Pace, Luke Evans, Martin Freeman, Orlando Bloom, Peter Jackson, Richard Armitage, The Hobbit