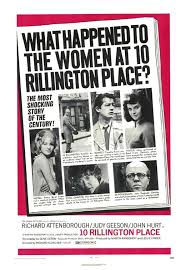 Films about real-life serial killers have that eternal problem: how far can they go in giving us answers? How much can we ever really understand why a killer does what they do? Is there any way of really putting ourselves in their shoes – and do we really want to? Ten Rillington Place avoids a lot of these issues by making no attempt to give understanding to Christie at all, simply presenting his actions, and by putting the focus on the tragic death of Timothy Evans.

In a miscarriage of justice Timothy Evans (John Hurt) was tried and executed for the murder of his wife Beryl (Judy Geeson) and their baby daughter in 1950. The real murderer? The man who lived downstairs, John Christie (Richard Attenborough), a socially maladjusted, softly spoken man who confessed to killing at least eight people three years later at his trial for murdering his wife. Christie had an uncanny gift for gaining the confidence of desperate women, would offer to perform illegal (and free) medical procedures (such as abortions), during the course of which he would gas them with carbon monoxide, strangle them, possibly carry out acts of necrophilia and then bury them in his garden or in the walls of his house. Evans never suspects until far too late that Christie is the killer and, scared that he will be accused, follows Christie’s advice to the letter – advice that will only make him look all the more guilty.
Richard Fleischer’s chillingly documentary-style film-making goes into forensic detail on the events of the murder of Beryl Evans and her daughter, and the wrongful conviction of Timothy Evans for the crime – largely on the basis of Christie’s testimony at Evans’ trial. Fleischer shoots the film with a deeply disciplined restraint, a calm documentary style that avoids any sensation lingering on the crimes, but still carries great emotional impact.

The film covers the period from Evans moving into the flat above Christie, Christie’s murder of Beryl, Evans panicked flight to Wales on Christie’s advice, his series of confessions to the police, his trial and execution. Book ending the film we get a scene with Christie murdering his neighbour Muriel Eady – a terrifying demonstration of Christie’s murder rituals, as well as an indicator of how easily he could gain the trust of his victims. What it strikingly doesn’t try to give us is any psychological explanation for why Christie did what he did. There are no revealing flashbanks, no cod-psychology. Instead we just see a killer, kill people. He just kills people. We might get an idea of what he gets out of it, but no explanation of what turned him to it. The film is all the more powerful for it.

Instead the focus is on the victims, and the Evans story is heart-rending, partly because of Fleischer’s calm, sensitive direction, but mainly due to John Hurt’s astonishingly powerful performance. The film, and Hurt, don’t shy away from the qualities that made Evans seem like such a natural fit for a murderer at his trial. He’s a compulsive liar. He brags. He fights and argues with a fury. He’s not really that sympathetic a guy. But he’s certainly innocent. Hurt brilliantly demonstrates his vulnerability and simplicity – Evans was illiterate and almost unbelievably trusting, a liar who fell victim to a superb, manipulative liar. 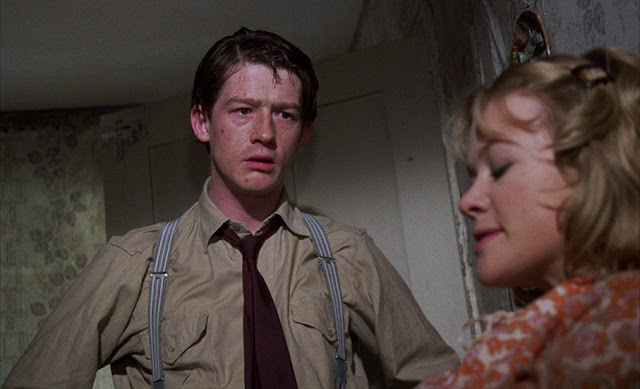 His shock and only slowly growing realisation of the nightmare he is in are incredibly moving, as is his powerful grief when he finds his wife killed – and his trusting innocence when he turns (unknowingly) straight to his wife’s killer for advice on what to do. Every action Evans takes in the film makes you want to jump in – his complete inability to understand until late on that Christie is the killer is deeply moving. Unsympathetic as he is at the start, by the conclusion you almost can’t bear to watch him incriminate himself with each action. Hurt is sublime, with his weak manner, his confusion, his touching faith that it will all be okay and his feeble mantra of “Christie Done It” – it’s one of the greatest performances in his career.

Hurt’s performance is brilliant, but he’s matched by Judy Geeson’s marvellously emotional performance as Beryl Evans. Geeson has the perfect look for the part, and she completely embodies a woman who has found herself in a difficult situation, in love with a weak man. You understand completely how she is drawn towards Christie as a confidant, and why she would feel the desperation to abort a child she and Evans could never afford. Her eventual murder is horrifying in its struggle and desperation, the growing horrible realisation in her eyes that she is in mortal danger – this is a particularly strong sequence, difficult to watch for the viewer, as we know what a terrible series of decisions she is making.

Fleischer’s film was motivated by a very firm anti-death sentence stance. The scene of Evans’ execution is shocking in its brutal suddenness. Shot with a handheld camera and in a single take (in near silence other than Hurt’s deep breathing), the execution is over and done with in less than a minute – from Evans sitting in a room, to the reveal of the executioner’s noose next door and the terrible drop (with a jump cut straight to Christie stretching his back). It’s a brilliantly low-key, but resoundingly powerful scene that sticks with you for all time. 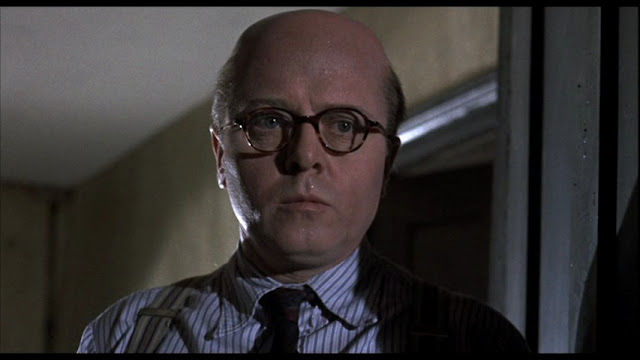 All this way and we’ve not mentioned Richard Attenborough’s transformative performance as Christie. Attenborough presents the softly spoken monster as a bland, empty non-entity, a man who has almost nothing to make him stand out from the crowd. He never makes the part into a great monster or any sort of domineering force of nature. In partnership with Fleischer, he shows Christie was a total blank canvas of a man, “evil” only in the most mundane and uninteresting way. He’s so mild-mannered, you can see why so many women trusted him. Attenborough is chillingly blank throughout, in a deeply unsettling performance of crushing mundanity. He’s brilliant in this film – Attenborough was completely committed to its anti-death penalty stance – and he avoids the temptation of trying to explain or make sense of Christie.

That’s the trick of the film – Christie is not a special man. He performs dreadful acts, but he is a nothing of a person, devoid of motive (the lack of motive is something those at Evans’ trial use most to argue against Christie’s possible guilt), a totally forgettable man who committed crimes memorable only for their cruelty. Fleischer, and Clive Exton’s careful, thoroughly researched script, is simply superb in presenting Christie with all his filthy blankness, Rillington Place in all its crushed lack of colour, and the murders in un-flashy documentary sadness. Ten Rillington Place is an engrossing true-life story that turns a miscarriage of justice into a Greek tragedy. It’s a much overlooked classic.
Email ThisBlogThis!Share to TwitterShare to FacebookShare to Pinterest
Labels: 1971, Andre Morell, Biography, British Films, Crime drama, Geoffrey Chater, John Hurt, Judy Geeson, Pay Heywood, Richard Attenborough, Richard Fleischer, Robert Hardy