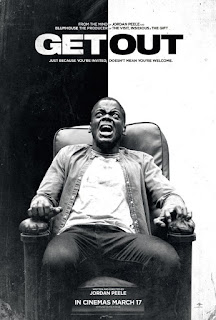 Really great genre film-making transcends its genre, while demonstrating all its strengths. Get Out is nominally a horror film, but strangely it didn’t feel quite like that while I was watching it. It’s more of a horror-inflected social drama with lashings of satire and commentary on race in America. It’s a smart, deeply unsettling film, which really makes you think about how racism has subtly developed in America over the past 100 years. It also manages to feel very much like a film caught at the turning point between Obama and Trump.

Chris Washington (Daniel Kaluuya) is a young, black photographer dating wealthy white Rose Armitage (Allison Williams). He reluctantly agrees to spend the weekend with her family on their countryside estate. Rose’s parents, neurosurgeon Dean (Bradley Whitford) and hypnotherapist Missy (Catherine Keener) are almost overly welcoming and in expressing their liberal credentials. Chris is doubly unsettled that the Armitages’ house has two black workers, both of whom seem alarmingly compliant. The weekend coincides with an annual get-together the Armitage family hosts, where the guests (all rich and white) make comments to Chris admiring his physique, build, sporting ability and genetic advantages. Chris can sense something is wrong – but can’t even begin to guess the mystery at the heart of the Armitage house.

Get Out is, more than anything else, a film about racial politics in America. It trades in the unsettled discomfiture some liberal white people feel when they actually have to interact with a black male from a different background, and then inverts this into a horror. But it rings true: the father so keen to be seen as liberal he uses the phrase “my man” repeatedly, praises Obama, shows off his “multi-cultural art”, delightedly repeats stories about Jesse Owens; the guests at the party who pinch Chris’ muscles, and praise his physique. It feels like a situation where Chris is invited but not welcome.

In turn, it also inverts the discomfort some black people feel in white middle-class society. Chris finds his hosts patronising and condescending in their desire to be seen as open-minded. He’s uncomfortable at the black staff. Every second in the house reminds him that he doesn’t belong there. But the genius of Peele is that this could be nothing to do with anything except seeing a black man being constantly made aware of his difference in an unfamiliar milieu.

Chris though, being basically a decent guy, does what any polite person in a minority tends to do: he works overtime to put his hosts at ease. He keeps quiet, he smiles, he laughs at jokes,  he tries to gently drift away. As almost the sole black person, he’s lost and out-of-his-depth and comfort zone (he’s reluctant about even going). All the other black people he meets are strange – Peel brilliantly shows the mixed messages from the servants in particular. In one brilliant sequence Georgina, the maid, says everything is fine while smiling and simultaneously crying. A black party guest dresses and behaves like the rest of the white people around him: has he just completely assimilated or is there something sinister going on here? Chris might guess more – but until it’s too late he decides to batten down the hatches and ride out an awkward weekend.

The house has plenty of mystery – there is a throw-away reference to a locked off-limits basement. Early in the film the couple hit a deer with their car: the police demand to see Chris’ ID even though he wasn’t driving, to the outrage of Allison. It’s a brilliantly eerie opening that hints at danger to come, both in the corpse of the deer and the suspicion of the police. It’s a brilliant touch to explore the barely acknowledged underlying racism of some middle-class Americans – this liberal elite would be horrified to hear the suggestion that they are anything but open-minded, but in fact have deeply paternalistic, two-tier beliefs that have subtly developed since the end of segregation.

The film is played superbly by the whole cast. Bradley Whitford brilliantly inverts his Josh Lyman persona. Catherine Keener is a sort of warm Earth Mother figure, with darkness and control under the surface. Both characters seem suspicious and yet are both so open and direct in what they say, you think it’s almost too obvious to assume they are villains. Caleb Landry Jones as their son is both full of alpha-male welcome and strange, violent and scornful looks and yearnings. Allison Williams as Chris’ girlfriend seems a strange presence in this household, but her honest sympathy for Chris, and her growing realisation with him that something is wrong, is the one thread Chris has to hang onto.

The star-turn of the movie is of course though Daniel Kaluuya as Chris. A young British actor, he’s superb here in a reactive role, trying to persuade himself everything is fine. His unease and insecurity are brilliantly done, as are the surface humour and reserved politeness he uses to disguise this. In a paranoid film, he is going out of his way to not appear paranoid. His relief in seeing any other black people – and then confused discomfort at their behaviour – is endlessly brilliant. As the plot progresses, Kaluuya takes Chris to some dark and emotional places, conveying both despair, fury and pain brilliantly.

Peele’s film is not perfect. Introduce a character as a hypnotist and you are probably tipping the hat a little too soon – though to be fair, Peele even lampshades this by having Chris’ friend Rod (a hilariously endearing Lil Rel Howery) immediately point this out. The explosion of violence when it comes at the end is gratifying, but a little too much almost for a film about lack of power. The DVD contains an alternative ending that is, in fact, far better and more appropriate, which continues this theme (and is what I expected the ending to be as the film entered its final act) but was replaced because Peele felt (he says on the commentary) it needed a more upbeat ending.

Get Out though is both an excellent paranoia thriller with lashings of horror, and also a brilliant satire on race in America. Trading on the comedy of embarrassment, it has genuine things to say about how the racial divide hasn’t really gone away at all. Both funny and also deeply terrifying, its final reveal of what is going on is brilliant and also rings very true – as well as casting new light on several scenes we have already seen. Peele is a first-time director – but based on this he certainly won’t be one and done.
Email ThisBlogThis!Share to TwitterShare to FacebookShare to Pinterest
Labels: 2017, Allison Williams, Bradley Whitford, Caleb Landry Jones, Catherine Keener, Daniel Kaluuya, Horror film, Jordan Peele, Lil Rel Howery, Political satire, Social issues, Stephen Root