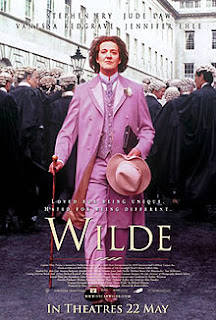 Could there be a more perfect piece of casting than Stephen Fry as Oscar Wilde? Not only is Fry the spitting image of the famed Irishman, but Fry’s own mercurial talent, his enormous outpouring of novels, articles and screenplays, his skill as a raconteur and his general ubiquitous presence as a personality make him a pretty good modern equivalent of Oscar Wilde. A lifelong admirer of Wilde – and an increasingly vocal proponent of gay rights and mental health awareness – Wilde’s life plugs into many of Fry’s own outlooks on the world. So yeah, perfect casting!

Opening in 1882 with Wilde’s tour of America (he effortlessly charms a group of clichéd “yee-haw!” silver miners – who literally fire their guns into the air in delight at his bon-mots in the film’s crudest touch), the film covers Wilde’s growing career, but focuses on his personal relationships. Unaware of his homosexuality, he marries Constance (Jennifer Ehle), but discovers his true nature with her friend Robbie Ross (Michael Sheen). However, this leads to his destructive, obsessive love for alternately petulant and caring Lord Alfred Douglas (Jude Law), his beloved “Bosie”. When he is accused publically of sodomy by Bosie’s father, the Marquess of Queensbury (a raging Tom Wilkinson, chewing the scenery), Wilde takes the matter to court – a disastrous decision that destroys his life.

Brian Gilbert’s film is a sensitive and lovingly crafted slice of period drama, that movingly demonstrates the hypocrisy of Victorian values. Wilde is celebrated by the public, despite the open secret of his and Bosie’s relationship, while rent boys (including a one-line appearance from Orlando Bloom!) and discrete gay relationships are common place. Wilde is a gentle, naïve man for whom emotional closeness is more important than physical love. He charms a society only too aware of his nature. However, the instant he causes a stink, his reputation is ruined and his life collapses. What the film does so well is give us a sense of the inner vulnerability, doubt and desire for affection at the heart of a man who, perhaps more than any other, lived his life as a public exhibition.

Halliwell’s Film Guide claimed the film attempted to reposition Wilde as a family man, a grossly unfair view of the film’s stance. As if a man who discovers he is gay could not love his children, or that he could no longer care for his wife. Similarly, accusations that the film shows Wilde’s homosexuality as the roots of his downfall are similarly misguided – Robbie Ross is unaffected by legal troubles and he’s openly gay. No, the film is making a far more conventional (in a way) point – Wilde was brought low because he fell hopelessly in love with the wrong guy.

Jude Law’s big break was in this film – and watching it again is a reminder of what a firebrand, dynamic actor he can be. He makes Bosie half monster, half emotionally vulnerable child. He alternates (sometimes within the same scene) between affection, devotion, kindness and wildly petulant rage. He’s overwhelmingly selfish and self-obsessed – even as Wilde’s life collapses, he can only whine that he is furious his father is winning – but then remorseful and guilt-stricken when the consequences of his actions become clear (but not enough to not do it again). Law juggles all these contradictions with astonishing skill – it’s an assured, magnetic performance of brilliance. We can see why Wilde adores him, while at the same time wanting to wring his neck.

It’s also clear why all the other characters around Wilde find him so appalling. Ross (and Sheen is similarly superb as Wilde’s tragically “friend-zoned” devoted admirer) can’t bear the appalling influence Bosie has, but knows he’s powerless to do anything about it. In one great scene, Bosie haughtily says he knows Ross always hated him, before cruelly saying it’s because Wilde loved Bosie, but Ross was only “one of his boys” – the look of pain on Sheen’s face is brilliantly moving. Wilde himself seems almost sadly (if inevitably) drawn into Bosie’s tastes for casual sex and rough trade – often playing voyeur at these events, while sadly accepting Bosie doesn’t find him physically attractive. Wilde’s basically the victim of an abusive relationship – and the film does a brilliant job of demonstrating why a man otherwise so blessed with intelligence can’t see it. 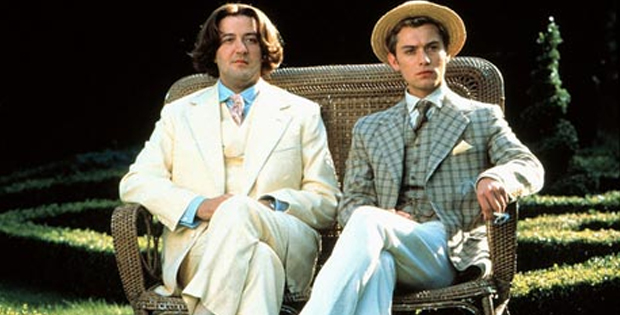 Julian Mitchell’s excellent screenplay (based on Richard Ellman’s award-winning biography) uses Wilde’s The Selfish Giant as a framing device – subtly comparing Wilde and Bosie respectively to the giant and the child. It also brilliantly constructs a sense of Wilde’s quick wit and staggering intelligence, and provides a host of sparkling cameos for some fine character actors. The production design and photography are spot-on, and while Gilbert may be slightly workmanlike in his filming, he certainly lets the story tell itself.

The focus on Wilde’s family life is also reassuringly different – it’s brilliant to see Wilde’s obvious adoration for his children, and plenty of indication that he was actually (much of the time) a very good husband and father. Mitchell’s script softens Constance’s reaction to Wilde’s conviction (she wasn’t as forgiving and forward-thinking in her views as she seems to be here) but it does mean that we are allowed to see the full story of Wilde’s life, rather than having him defined by his sexuality. Jennifer Ehle also does a marvellous job with very little material, and her quiet dignity and support for her husband (despite her anger at his obsession with Bosie) is very affecting.

But at the centre of all this is that perfect casting of Stephen Fry. In all the rest of his career, Fry will never be better than he is here. His Wilde is intellectual, mildly arrogant, but also naïve, gentle and almost unworldly. His voice is perfect for the aphorisms, and he is really striking physically. Above all though, he brings a deep, emotional empathy to the part – you feel how personal this is for Fry the actor, and you feel how closely he identifies with a man who discovered his sexuality late. His besotted, blind love for Bosie is as affecting as it is frustrating. His vulnerability in Reading gaol is deeply moving. It’s a quite marvellous performance, anchoring a movie that is gentle, kindly, caring and sensitive in exploring the inner life of a very public man.
Email ThisBlogThis!Share to TwitterShare to FacebookShare to Pinterest
Labels: 1997, Biography, Brian Gilbert, British Films, Gemma Jones, Ioan Gruffudd, Jennifer Ehle, Jude Law, Judy Parfitt, Michael Sheen, Stephen Fry, Tom Wilkinson, Vanessa Redgrave, Zoe Wanamaker