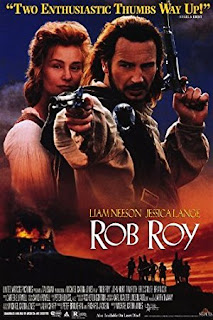 In the mid-1990s there was one of those bizarre Hollywood coincidences that saw two similarly filmed Scottish-based dramas head into production at the same time: Braveheart and Rob Roy. Braveheart stole the headlines, and the Oscars, and turned William Wallace from a footnote in history into an icon of Scottish independence. However, it’s arguable that the over-looked Rob Roy is the better, richer, more involving film.

In 1713, Rob Roy MacGregor (Liam Neeson) is the Chief of the Clan MacGregor, in a loving marriage to Mary (Jessica Lange), and supports his clan through protecting the cattle of the gentry. Knowing that this is not enough to help their poverty, Rob borrows £1,000 from the Marquess of Montrose (John Hurt) to start a cattle trading business. However, on collecting the money, his friend Alan MacDonald (Eric Stoltz) is murdered by Archibald Cunningham (Tim Roth), a foppish playboy and ruthless fencer, who is staying with Montrose and wants the money to clear his debts. Montrose demands Rob falsely testifies that his rival the Duke of Argyll (Andrew Keir) is a Jacobite in return for forgetting the debt – when he refuses, he is named an outlaw and a rebel.

Rob Roy works so damn well because it is thrillingly told, well-scripted, shot with a romantic sweep in some terrific Scottish locations and uniformly excellently acted. It’s perfectly constructed as a classic melodrama, because the heroes are pretty much completely upright, admirable and inspiring (without ever being tiresome or sanctimonious), while the villains are intriguingly shifty and vile, running the gamut from cowardly opportunist to vicious sociopath. Chuck this in with a tightly focused plot, and it works extremely well.

Liam Neeson is perfect casting as the upright Rob. Few people do nobility and decency better than Neeson, and Rob is just about the most stand-up guy you can imagine. You can totally understand why every one of his clan seems to worship the ground he walks on. Neeson’s classical physicality and stance totally sell him as the ultimate highlander, while his kindly eyes and gentle manner make him an obvious fit as an inspiring leader.

Caton-Jones directs the action with zip, even if the film does perhaps go on a fraction too long. He sets Rob’s decency and honour at the centre of the film, and brilliantly builds the thematic story around the shifting world where old-school honour and decency is being left aside for the more ruthless realpolitik of Montrose. Rob’s old-school decency makes him the kind of hero figure you see in a traditional Western – and Caton-Jones is clearly inspired by the scope and sweep of John Ford Westerns, making excellent use of the mist and the hills.

The Scottish highlands are our wild plains, the traditional values are those of the homestead – and the communities Rob protects are presented with a warmth and glow that is never galling. A lot of this is due to Jessica Lange’s excellent performance as Mary, a woman of warmth, tenderness but also hard-hearted realism mixed with a sharp strength of will. Lange (and her lilting accent is quite lovely to listen too) handles the events that occur to her as the wife of a rebel with a dignity, but also a fierce rage just below the surface. If Rob is defending honour, she represents it.

But the real strength the film has is its villains. It has three very different but terrific antagonists, each of them brilliantly brought to life by three very good actors. John Hurt brings Montrose a brilliant sense of slightly perverted corruption, the arrogant insouciance of a man who works out there is more going on than he is being told, but not caring so long as he can turn it to his advantage. Brian Cox is excellent as the cowardly, greedy, shallow and bullying land property manager, snivelling and timid beneath his bluster.

The real swagger through comes from Tim Roth, who is quite superb as the flamboyant sadist and sociopath Archibald Cunningham. Roth marches off with the film, pitching it just right as a man who presents (and lives) a performance to the entire world: a foppish playboy who seems light and disposable, but is in fact a ruthless, dangerous man with no principles and a horrifying capacity for violence. The character has enough humanity to prevent him from becoming a caricature – he’s bitter at being a bastard, he has a strange affection for his mother. He’s aware that he’s the baddie – he just doesn’t care. In fact he loves it. He invites people to underestimate him – and takes a sadistic delight in proving them wrong. He’s a perfect dark reflection to Rob.

The film introduces him demonstrating his terrifying skill with a sword in a sporting duel: and you don’t need a PhD in storytelling to guess that the film is heading towards a second, closing sword duel between our noble hero and his sadistic opposite. When it comes, it’s a belter of a sword fight, brilliantly choreographed, that sums up the whole movie: Rob fights with a broadsword (and the film demonstrates how exhausting swinging one of those can be) and depends on directness and fairness. Cunningham fights with a rapier, is quick, indirect and gleefully delights in inflicting a number of glancing wounds. It’s one of the best sword fights (and uses of combat to communicate character) on film – and it’s engrossing.

Rob Roy is easily overlooked – but it’s a fine film, full of memorable moments and above all stuffed with terrific performances. Caton-Jones shoots the film very well, and works brilliantly with the actors. You’ll remember them all – and you’ll invest in their stories. Yes it is a little too long, and yes sometimes it’s a little too in love with the romance of the highlands – but it’s a smashing, exciting and engrossing film and you’ll certainly find plenty in it to enjoy: not least Roth’s showboating menace.
Email ThisBlogThis!Share to TwitterShare to FacebookShare to Pinterest
Labels: 1995, Andrew Kier, Brian Cox, Eric Stoltz, Historical epics, Jessica Lange, John Hurt, Liam Neeson, Tim Roth