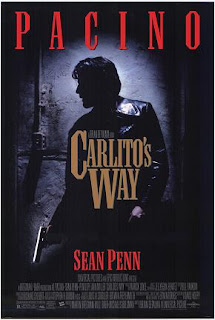 In 1975, Carlito Brigante (Al Pacino) is released from prison after five years on a legal technicality, exposed by his friend and lawyer Dave Kleinfeld (Sean Penn). Carlito makes a speech at his hearing, claiming he is a reformed man who wants leave his criminal past behind him – and to the shock of Kleinfeld and his colleagues in the underworld, he’s telling the truth. Carlito attempts to go straight, and to rebuild a relationship with Gail (Penelope Ann Miller), the young woman he left behind. Unfortunately, Kleinfeld is not only becoming increasingly unpredictable due to his cocaine addiction, but he is starting to blur the lines between criminal lawyer and plain criminal. His actions continually threaten to drag Carlito back into the crime industry.

Carlito’s Way is a fine semi-morality tale, a modern tragedy of a man who, every time he thinks he’s out, “they pull me back in”. And of course we know that he’s on a hiding to nothing, as the film opens with Pacino gunned down by an unknown assailant and recounting most of the film’s plot (presumably) from beyond the grave. His attempts are doomed largely because, in order to go straight quick and easy, he has to raise money the only way he knows how – working in the very same flashy nightclubs and among the career criminals that he should absolutely be avoiding.

Carlito narrates the film with a weary reluctance, carefully recounting the mistakes he made and why. It’s a device that largely manages to avoid telling us the obvious, and actually gets us closer to, and like, Carlito. It also helps that Pacino’s voice itself has a gruff poetry to it, and he adds a Shakespearean grandeur to this familiar old-school tale of the crook who wants out.

Pacino’s intensity works fantastically for the part. He largely keeps the Pacino fireworks for the moments where they carry the most impact. He and de Palma carefully sketch out a portrait of Carlito as a world-weary man, who (try as he might) can’t leave behind the code and rules that have governed his life as a criminal. He can’t escape the confines of thinking like a criminal. Most terribly, his old-school sense of honour (few actors convey dishevelled personal morality better than Pacino) is what will doom him – he can’t break the code of the streets. It’s a terrific, empathetic performance from Pacino.

Pacino also develops a sweet, loving relationship between him and Penelope Ann Miller’s Gail. In the way of these films, Gail is a stripper – she alternates between sweetly loving and overtly sexually flirtatious as the plot demands – but Miller makes her feel like a real person. She and Pacino have great chemistry (which, rumour has it, also carried over into real life) and de Palma shoots their scenes with an old-school romanticism and a steady camera, which contrasts with the disjointed sweep and Dutch angles he uses elsewhere.

Sometimes these flashy angles get on my nerves. de Palma often feels like he’s trying too hard, rather than stretching his muscles. Saying that, he’s a master of the set-piece. The film has two action set-pieces and both simmer with tension and inventiveness. One involves a bungled drugs deal in a dingy bar. The other a thrilling chase sequence in Grand Central Station, a deliciously shot mixture of great editing and daring extended single shots. Sequences like this bring memories, inevitably, of Scarface and it’s tempting to see Carlito’s Way as a spiritual sequel – as if Tony Montana had been arrested and changed his ways.

Perhaps a testament to how good Carlito’s Way is (or rather how much I enjoy it) is that I even think Sean Penn is terrific in it. Penn is one of those actors I find tryingly self-important (both professionally and personally). But his weaselly lawyer, a hair-trigger addict, nowhere near as smart and adept as he thinks he is, is marvellous. Penn’s performance is a whipper-cracker mix of slimy self-confidence and arrogant blindness, with moments of curiously underplayed vulnerability that makes it make sense why Carlito remains so loyal to him. It’s one of Penn’s best, most controlled performances, a virtuoso performance of whining weakness.

Carlito’s Way is part pulp gangster thriller, part character study humanely outlining the impossible difficulty of changing our stars. Carlito may be ready to jack in the criminal world – but he continues to live the life of the criminal while persuading himself he isn’t. The whole film has a tragic inevitability about it – and would do even without the framing device. Carlito wants out – but he wants to rush to get the investment he needs, and walking the shadow line is the only thing he knows how to do. It’s a great modern tragedy.
Email ThisBlogThis!Share to TwitterShare to FacebookShare to Pinterest
Labels: 1993, Adrian Pasdar, Al Pacino, Crime drama, Gangster films, James Rebhorn, John Leguizamo, Luis Guzman, Penelope Ann Miller, Sean Penn, Viggo Mortensen