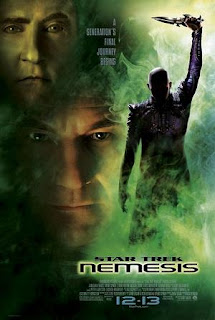 There are few things in the Star Trek franchise with as poor a reputation as Star Trek: Nemesis. It’s as close as the series got to a franchise-killer, a film that bombed so colossally (the first ever Star Trek film to lose money at the box office) that it seemed to end not only the movie series but all planned television projects. Since then, it has been remembered as an incoherent, poorly plotted mess, crammed with terrible writing and direction and shoddy action. Is this memory fair? Well yes and no.

Picard (Patrick Stewart) and Data (Brent Spiner) have their sense of self thrown: first by Data’s discovery of an identical, unadvanced prototype of himself called B-4 (also Spiner) and then by Picard discovering on a mission to Romulus that the new leader of the Romulan Empire is a clone of his younger self, going by the name Shinzon (Tom Hardy). Having assassinated the Romulan government, Shinzon plans to give freedom to his “Reman brothers”, the slave race that raised him from childhood. But he also has sinister aims for the Federation…

This is a horrendously compromised product, cut to ribbons by the studio to get as close as possible to two hours as possible, regardless of the impact on plot or characters. Why? Because it was released at the same time as Lord of the Rings: Two Towers and the plan was all the people who didn’t want to see that would choose Nemesis instead. I won’t start to explain here all the reasons this plan was stupid. Suffice it to say, it didn’t work and meant we ended up with a gutted mess that jumps as quickly as it can to action set-pieces, many inadequately filmed on the cheap.

It also doesn’t help that Stuart Baird was brought on board to direct: a self-proclaimed “non-fan” who proudly announced he hadn’t watched any Trek before. A fresh perspective is great – but come on, if it’s the fourth film with the cast, following 175 episodes, you’d think some respect for the past would be good, right? Instead, Baird seems contemptuous of the whole genre and has no tonal understanding of Star Trek. The actors constantly struggle to keep their characters as consistent as possible, while events and actions keep spinning wildly out of whack. I could start nit-picking Star Trek errors (why is Worf here? Why is Wesley back in Starfleet? What’s happened to Data’s emotion chip? Why does no-one mention Data’s evil brother Lore? Picard was not always bald. Etc. etc. etc.) but I’d be here all day. 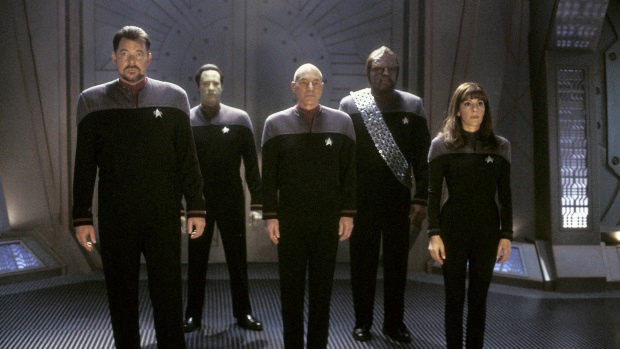 Anyway, if they were going to bring a new face on board, could they not have found a better director than Baird? Some of the sequences of this film are so wonkily filmed they look cheaper than they probably were. Any scene involving hand-to-hand fighting is cursed with poor shots and bizarre slow motion straight out of 1970s TV. They all look absurdly slow and cheap. The Romulans are redesigned as ludicrously camp, partly green skinned, heavily made-up softies. Shinzon and the Remans sashay around in noisy rubber costumes like space gimps. Baird has no sense of comic timing and virtually all the overtly “funny” parts of the film fall on their arse. The wedding scene is one long sequence of slightly embarrassing faux-comedy – the sort of thing that will confirm to any sceptic that loving Star Trek is desperately sad.

But the main problem is the plot. Shinzon is a character who should be really interesting: for starters, he’s played by the excellent Tom Hardy. He should be casting a dark light on Picard, with a feeling that these are men only a few degrees apart, or that Shinzon is a kind of renegade son pushing to find his own place in the universe. All lost in the edit. Shinzon’s back story and aims make no sense, and by the end his character degenerates into a motiveless nutter. If he’s all about freeing the Remans (a goal achieved at the start of the film) why does he want to destroy Earth? If his focus is on Picard why does he constantly delay capturing him? What would have worked was if the Enterprise were trying to stop Shinzon destroying Romulus, or if Shinzon’s focus was exclusively on Picard and we had more of a sense of Shinzon being a “dark Picard”. Instead he’s just a nutter with a homicidal plan for Earth which comes out of nowhere. 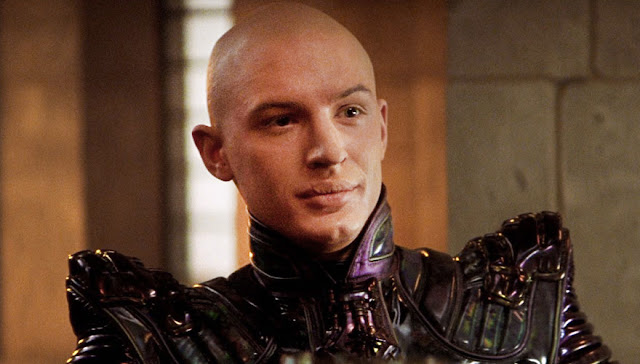 Badly structured as the Shinzon plot is, at least this has some decent scenes between Hardy and Stewart. However the B-4 plot makes little sense at all, while also providing an unfortunate opportunity for Spiner to play “simple Data”, like an android Rain Man. In terms of where he fits into Shinzon’s plan or the rest of the plot, B-4 makes no sense and provides no real contrast to Data or comment on the Picard/Shinzon relations. He should, of course, be another repeat of the theme of Picard seeing a disagreeable version of himself. But this never comes together. It just gets used for jokes or for Spiner to show-off. Neither option is that appealing. 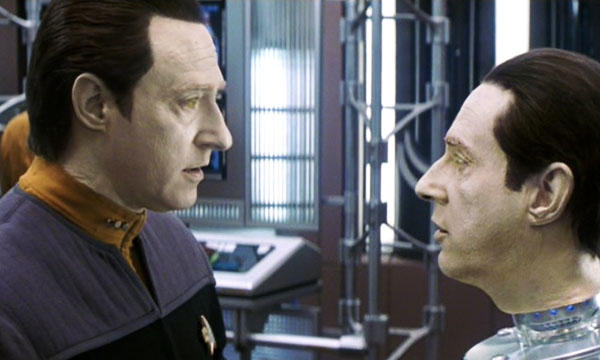 This thematic material keeps getting constantly lost. It’s cut so badly that it often makes the film empty and unsatisfying. You keep wanting thematic juice: our heroes confronting dark versions of themselves, or the struggle of dealing with your lack of uniqueness in the galaxy. But the film only wants to sketch these in roughly in order to keep moving forward to action scenes. The worst of these is a prolonged car buggy chase on a primitive planet that not only takes ages, it’s desperately dully and makes no real sense at all when you think about (for starters, if the baddies wanted B-4 to be found, why break him up and sprinkle the bits all over a dangerous planet?).

This means that, despite the title, we never get the sense of there being an actual nemesis in this film. Shinzon never really feels like a reflection of Picard. The film just tells us he’s a baddy, because, hell he just is. You can practically tick off the standard list of villain quirks. Lack of patience? Check. A creepy attitude to women? Check. Killing a subordinate for failing? Check. Any prospect of making him an interesting, different type of character gets pushed out in favour of the simple.

That’s many paragraphs saying what’s wrong. But it’s not all bad. Honestly it isn’t. In fact, there are some nice moments in there. There are some good character beats, and the cast are working hard to make these moments land. In particular, there are some lovely exchanges between Picard and Data, while Geordi gets more to do in this film than most of the last few (including some actual moments exploring his friendship with Data, often lost in the films). Picard feels more like the enlightened explorer and intellectual character from the TV show here than he did in any of the other films. When we are allowed to relax and breathe, the film touches on an elegiac, end-of-an-era quality (see scenes like that below).

Also, as awful as the buggy chase sequence is, the final space battle (while a clear lift from Star Trek II) is exciting and well filmed, and also showcases our characters’ professionalism. The hand-to-hand combat bits are hopeless, and Picard’s final “man on a mission” assault strains credibility. But Data’s final sacrifice is quite moving – especially the quiet moments afterwards where the rest of the cast respond to it. It’s sad because you know more of this warm interplay is on the cutting room floor with the thematic material of the film – leaving this neutered disappointment instead. Which is a shame because there is some decent material here – and some enjoyable moments. There is also a terrific score.

Star Trek: Nemesis is not as bad as you may remember. I mean, it’s a long way short of the best Star Trek films – but it’s got its moments. It’s made by a director who doesn’t understand (or care) about the franchise, but the cast do their best to hold it together. It’s a thoroughly compromised film, ruined by too many people trying to make a film that did too much, and it was clearly intended as a jumping off point for the next film (which never happened), but for all this, there is just about enough to keep a fan entertained – although probably not a non-fan. And if nothing else, this is the last chance to see the cast of one of the best sci-fi shows ever made.
Email ThisBlogThis!Share to TwitterShare to FacebookShare to Pinterest
Labels: 2002, Box office bombs, Brent Spiner, Franchise Killers, Jonathan Frakes, Patrick Stewart, Ron Perlman, Science fiction, Star Trek, Stuart Baird, Tom Hardy