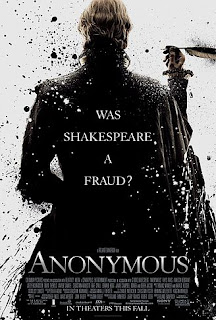 Many people would say that, for as long as there has been Shakespeare, there have been arguments about who wrote him. But that would be wrong. Because at the time everyone knew it was Shakespeare. Murmurings grew in the nineteenth century, but it’s only in our bizarre more recent times, when everyone wants to feel that they are smarter than anyone else, that conspiracy theories have taken hold. This film dramatizes one of the most famous conspiracy theories – and takes it to the bonkers extreme, chucking in royal incest, bastard claimants to the throne and blood purity, like it’s desperate to be some sort of poetry-circle Game of Thrones.

Edward de Vere, Earl of Oxford (Rhys Ifans) is a genius. He has written hundreds of plays, despite never (it seems) setting foot in a theatre. When he does one day, he suddenly thinks – hang about I should get these on the stage! Looking for someone to put their name to the work, he approaches a reluctant Ben Jonson (Sebastian Armesto) before credit is high-jacked mid performance by drunken dullard William Shakespeare (Rafe Spall). Oxford continues producing the plays through Shakespeare, carefully using them to influence the crowd to support the Earl of Essex’s (Sam Reid) campaign to succeed Queen Elizabeth (Vanessa Redgrave) and win her away from the influence of the Cecils (David Thewlis and Edward Hogg).

It’s not often you get a film that is both a stinking, insulting piece of propaganda garbage, but on top of that is also a terrible film full stop. Anonymous is such a film. This mind-numbingly stupid, childishly idiotic film is probably the best case that Shakespeare wrote Shakespeare to come out of Hollywood. Because, after watching this film, you’ll sure as shit be convinced it wasn’t someone as tedious, pompous and arrogant as Edward de Vere, Earl of Oxford. Unbelievably Emmerich and co thought they were making a film that would reset the table of Shakespeare debate. The only thing that will need resetting will be your table after you’ve overturned it in fury.

The Oxfordian theory is yet another garbage “alternative history” that puts forward a candidate claimed to have “really wrote Shakespeare”. The central conceit usually goes something like this: Shakespeare was from a middle-class background, grammar school educated, never travelled and generally lacked the academic chops to write the plays. He was simply too common to be a genius. Ergo someone super smart must have done so instead.

The Oxford theory was put forward at the turn of the last century by (and I’m not making this up) Thomas Looney (yes it is literally a Looney Theory). It argues that Oxford was well travelled, well-educated and known as a poet so must have written the plays and poems. Shakespeare was hired to put his name on the plays because it was too shameful for an Earl to write for the theatre. Of course this doesn’t explain why Oxford had the sonnets released under Shakespeare’s name while allowing his own (not so good) poems to circulate freely – but facts never stopped these people. Oxford also inconveniently died in 1604, before the likely composition (and first performance) of over a third of the plays, but again never mind eh?

Anyway, I’ll get into the film in a second, but I’ll leave you with this. All contemporary evidence points to Shakespeare being the author of Shakespeare’s plays. All evidence we have indicates he was recognised as the writer by his contemporaries. The much vaunted travel knowledge rests on a few well-known city names and landmarks (who could possibly have known Venice had a bridge called the Rialto? Oh I don’t know, maybe anyone hanging out in taverns in international trading-hub London?) and includes howlers like Bohemia having a coastline and it being possible to sail between Milan and Verona. All evidence of research (far too hard work for the Looneys) into typography and the composition of the plays points to Shakespeare or at least that many of the works were composed after Oxford’s death. I would also add that the bollocks (which this film explores) of Shakespeare not spelling consistently is no great surprise when standardisation of spelling was still over 100 years away. Anyway…

Anonymous is well designed. It’s well shot. There are some decent costumes. Rafe Spall is okay as a ludicrously crude, shallow and dumb Shakespeare. Nothing and nobody else emerges from the film with any credit. It’s got the intellectual rigour of a child. It understands virtually nothing about the Elizabethan state. It even turns Elizabeth I (played direly by Vanessa Redgrave and a little bit better by Joely Richardson in flashback) into a hormonal idiot, a sex-obsessed harlot banging out bastards left, right and centre while wailing about how much she needs the man she loves. Even its understanding of theatre is crap. It is crap.

At the forefront of this steaming pile of manure is Rhys Ifans, utterly mis-cast from start to finish as super-genius Oxford. Ifans is bland, disengaged and bottled up, his manic potential completely wasted. Oxford comes across as an arrogant arsehole, talking down to fellow playwrights, ignoring his daughter, soaking up vicarious adulation from the crowd as if it was his right, and merrily putting his full weight behind an agenda stressing government should be left to those born to it, rather than the nouveaux rich Cecils. If an unpleasant prick like Oxford was soul of the age, it’s just as well time has moved on.

This viewpoint is all part of the film’s charmless embracing of the Looney theory that the plays are all a carefully constructed pro-Essex, pro-elitist propaganda machine, designed to manipulate the masses into staying in their place. To make this work, the film plays merry hell with history. Because nothing works better for a film claiming to be “true” history than to change established historical facts to better fit its story. Essex is repositioned as anti-James VI of Scotland, while the Cecils are shown to be advocates for his succession from day one. It hardly seems necessary to say that this was the complete opposite of their positions. The film can’t claim to be telling us the “real story” while simultaneously changing events left, right and centre to better fit its agenda.

Historical fast-and-looseness continues with Elizabeth I. Needless to say, half the male cast are her children – Essex, Southampton and (of course) even Oxford. This allows for lots of icky sex as an unknowing young Elizabeth and Oxford bump-and-grind. Even without the incest, this scene would still be revolting beyond belief. If this film has any claim to fame, it will be remembered as the film where the Virgin Queen performed fellatio on young Oxford (a weaselly Jamie Campbell Bower, dire as ever) while he recited Shakespearean sonnets. I watched this with a group of friends and this scene was met by horrified mass shrieking.

The land of the Elizabethan theatre doesn’t fare much better. Shakespeare’s contemporary playwrights are, to a man, plodding mediocrities dumb-founded that a play can be written entirely in verse. Poor Ben Johnson (Sebastian Armesto struggling manfully with a terrible part) in particular gets it in the neck, Oxford haughtily telling him he “has no voice”. Shakespeare is not only an idiot, he’s also money-grubbing, illiterate and (the film heavily implies) even murders Christopher Marlowe when he “works out the truth”.

But that’s the thing about this film: it really doesn’t give a shit about facts. By the time we reach the Essex rebellion and the film has changed the one categorical fact we have linking Shakespeare to the rebellion (his company performed Richard II privately for Essex’s friends the night before) you’ll have ceased to care. (The film substitutes Richard III instead and claims the hunchbacked king was created as a portrait of Robert Cecil – never mind that the character had already appeared in two plays by this point…) The Tower is the centre of some sort of all-powerful police state that alternates between scarily efficient and ludicrously incompetent depending on the demands of the script.

Amidst this firebombing of history, the film weaves its pointless conspiracy theory. So of course, Oxford is not only the greatest writer ever, but as Elizabeth’s son he’s also the true King of England. He is such a special snowflake genius, he’s even (in the film’s most stupid scene) shown writing and performing (as Puck) A Midsummer Night’s Dream aged 14. In a skin-crawlingly shite scene, Oxford searches for a play to give to Johnson while the camera pans along shelves of masterpieces he has casually knocked out. I would argue the plays have clearly been written by someone with an intimate understanding not only of theatre but the strengths and weaknesses of the company of actors originally performing them – but then this is a film that turns Richard Burbage into a harassed theatre manager, so what would be the point. By the end of the film, the announcement is made that all evidence linking Oxford to the plays will be destroyed and he will be forgotten. So you see the very fact that there is no evidence that this ever happened, is in itself evidence.

I realise I’ve not even mentioned the framing device of this film. The film opens in a Broadway theatre – and rips off the idea from Henry V that we are watching a play performance that becomes ever more realistic. Notable Oxfordian Derek Jacobi (playing himself) even narrates, neatly shitting on the memory of the same function he served in Branagh’s Henry. I love Sir Derek, but honestly a little of that love died during this film as he sonorously intones this lunatic nonsense. He’s not the only one of course – Mark Rylance (another believer) shamelessly pops up for a cameo. Needless to say, at the end of the “performance” the crowd in the Broadway theatre leave in stunned silence. I like to think that, rather than having their perceptions of the world shaken, they were just stunned such an epic pile of fuckwitterey garbage made it to the stage.

Or the screen for that matter. This is a dire, stupid film, poorly acted and woefully directed by a tone deaf director. Roland Emmerich, hie thee back to disaster porn! Everyone in it is pretty awful, the script not only stinks, it makes no sense, half the scenes are borderline embarrassing. Even if it wasn’t about a pretty distasteful Shakespearean authorship theory, this would still be a truly terrible film, a narrative and performance disaster. The only good thing about it is, the film is so bad, its conspiracy theory so unbelievably ludicrous, its fast-and-looseness with history so plain that, far from re-setting the table for Shakespearean studies, it seems to have fatally holed the Oxfordian theory below the water line. It’s offensive because it wants to peddle its bizarre agenda as true history, while simultaneously changing the historical events at every opportunity. Just fucking awful.
Email ThisBlogThis!Share to TwitterShare to FacebookShare to Pinterest
Labels: 2011, Box office bombs, David Thewlis, Derek Jacobi, Joely Richardson, Mark Rylance, Rafe Spall, Rhys Ifans, Roland Emmerich, Sebastian Armesto, Shakespeare, Terrible Films, Vanessa Redgrave