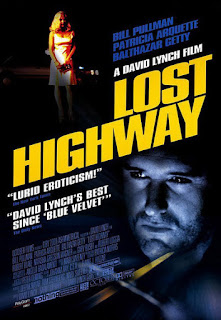 It wouldn’t be a David Lynch film unless the plot was impossible to explain, but here goes. Fred Madison (Bill Pullman) and his wife Renee (Patricia Arquette) marriage is on the rocks. The couple start receiving packages containing camcorder videos of their home. These videos become increasingly more and more personal and intimate. The final video shows Fred murdering Renee. Imprisoned, Fred suffers from headaches and then overnight he transforms into another person, Pete Dayton (Balthazar Getty). Released back into the world, Dayton encounters the glamorous Alice Wakefield (Arquette again). Then things get even weirder. Yup that’s right: weirder.

Lost Highway is probably Lynch at his most obscure and baffling. Like a lot of Lynch films, it’s a question of taste. What do you want to get out of a film? If it’s a puzzling mystery then this might be the film for you. Lost Highway is like an impossible jigsaw, or a landscape with no frame of reference: trying to judge what the overall actual picture is, is nearly impossible. Traditional film making elements, such as story and character, are subservient here.
So whether you like Lost Highway will probably come down to how much you are willing to accept everything you see is constantly being dismantled and repositioned by the film. It strikes a less successful balance between this “Lynchian” material and more traditional storytelling than Blue Velvet or Mulholland Drive (both, I would argue, superior films). However, for those willing to run with a mystery, Lost Highway is a baffling but intriguing watch – unsettling, unnerving, but fascinating.

So what is it about? Now I confess I needed to read up a little bit, but the best way to understand the film is as some sort of elliptical, dreamlike fantasy created by its lead character. It seems pretty clear that the majority of the film is, at best, subjective recollection or out-and-out fantasy. A little too much attention is paid in the film to a line from Fred Madison that he dislikes video cameras as he prefers to “remember things my own way rather than how they happened”. A fairly on-the-nose statement, but a clear mission statement for a film if I ever I saw one.

In fact, Fred Madison is so keen to remember the world only as he sees it that, he literally becomes someone else to build some sort of internal fantasy world where he can win the girl. But Fred/Pete is such a screwed up, confused person he can’t even get his own fantasy world right –impressions from the real world keep draining in. At least, that’s a fair interpretation. The film of course deliberately keeps things open: is this some fantasy Fred has while trapped in his cell? Or is there some sort of metaphysical transformation that fades into the real world? Is there an element of this story being circular and self-perpetuating? Is there any reality to it at all? How much you engage with these questions is a pretty good indication of what you’ll make of this film.

Whatever your response to it, as a piece of film-making it’s a very impressive piece of work. All the usual Lynchian touches are here: the strident and discordant lighting at key moments, the intelligent and daring use of music, the intermingling of design from the modern world and Americana of the 1950s, not to mention the moments of extreme violence and graphic sex. Lynch uses unsettling camera angles and sudden tilts of angle and sound to constantly keep the audience on their toes and questioning what they are seeing. Disturbing and haunting imagery, a testament to Lynch’s painter’s eye, is perfectly judged. Confusing as this film is, it offers a parade of intriguing images.

It’s an important landmark in Lynch’s filmography: a flowering of ideas he had been dabbling with since Twin Peaks, of mysticism, perversion and human darkness, and a jumping off point for haunting, almost illogical films to come like Mulholland Drive. The Mystery Man (unsettlingly played by Robert Blake – not least as this is the last film Blake made before his conviction for murdering his own wife) is a haunting, perfect Lynchian character – unsettling in appearance and confusing in intention. Is he a real person, or a mystical force? Is he some sort of external expression of evil driving Fred on, or is he part of Fred’s fractured mind?

Patricia Arquette plays two very different femme fatales, but to what extent are they reimaginings or reversionings of each other? It’s a very good performance from Arquette, playing someone who is not quite a real person, nor quite a fantasy, who feels like a character from a film moving into a real world, which itself is probably a fantasy. Just writing this sentence shows what a crazy film this is.

For the rest of the performances, there is a good mix of the genuine and the artificial. Bill Pullman, at his most understated, is perfect to ground the film, while Balthazar Getty gives a fine, detailed performance as a character who is similar and slightly different to Fred. Robert Loggia mixes ferocity and a bizarre tenderness as a character who may or not be a foul-mouthed gangster. These performances add a level of heart to the film, allowing a bit for freedom for the strangeness.

Lynch’s Lost Highway isn’t a masterpiece – it’s perhaps too self-consciously oddball and unusual, too reliant on mood and atmosphere to make up for its lack of story and characterisation. It is however intriguing, a brilliant puzzle, even though it doesn’t really allow you to invest emotionally in it at all. You can admire it as a mystery, but you can never really open your heart to it. It’s a film that is daring and dangerous, but it’s also one that, for all its erotic sex and tortured psyches, never really feels like it’s about real people with real feelings. It’s a mixture that, as I’ve said, works better in Mulholland Drive. But this is a very good staging post to that film.
Email ThisBlogThis!Share to TwitterShare to FacebookShare to Pinterest
Labels: 1997, Balthazar Getty, Bill Pullman, David Lynch, Gary Busey, Murder mystery, Patricia Arquette, Robert Blake, Robert Loggia, Supernatural thriller