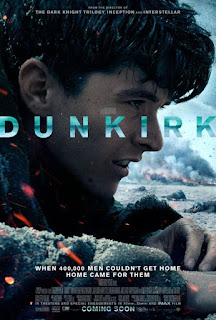 “We must be very careful not to assign to this deliverance the attributes of a victory. Wars are not won by evacuations. But there was a victory inside this deliverance, which should be noted.” -          Winston Churchill

The evacuation of Dunkirk is a very British triumph. Beaten and encircled by the Germans, British forces were stranded in a small pocket around Dunkirk. The country looked certain to lose almost 400,000 men to death or imprisonment – the core of its professional army. The fact that almost 340,000 soldiers were evacuated was more than a triumph: it was almost a miracle. Christopher Nolan’s epic new film brings the triumph and adversity of this campaign to the big screen.

The action unfolds over a week around the evacuation of Dunkirk. On the beach Tommy (Fionn Whitehead), Gibson (Aneurin Barnard) and Alex (Harry Styles) are desperate to escape the chaos on the beach, where the evacuation is being managed from the one standing pier by Commander Bolton (Kenneth Branagh). On the sea, Mr Dawson (Mark Rylance) and his son Tom (Peter Dawson) head to Dunkirk in their small pleasure boat to help with the evacuation, picking up a traumatised soldier on the way (Cillian Murphy). In the air, Farrier (Tom Hardy) and Collins (Jack Lowden) fly a one-hour mission over Dunkirk to provide air support to the stranded soldiers.

As a director, Nolan’s calling cards are playing with narrative forms and timelines, while allowing personal stories play out on extremely grand canvases. Dunkirk feels like a summation of some kind of his career: its multi-layered timelines are gracefully and intelligently threaded together, and while the canvas is enormous, the human stories don’t get lost. The human interest running through the film is particularly impressive, as there is so little dialogue. It’s pretty close to “experience cinema” – it throws the audience into an immersive explosion of events, giving as much of an impression as it’s possible to give of the claustrophobia, tension and terror of being trapped on that beach. 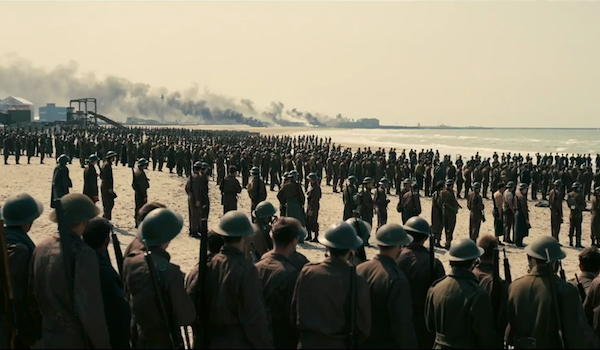 The film-making is impeccable in creating this overbearing feeling. Hans Zimmer’s score thunders over the film, bearing down with a constant pressure and making excellent use of metronome ticking to keep hammering home the time pressure. Nolan brilliantly inverts scale in his filming to create a sense of claustrophobia – we constantly see sweeping shots of but the scale of our surroundings only forces home the seeming impossibility of what the British are trying to do. Individual soldiers seem tiny – how can one man possibly have a chance of escaping? It’s a brilliant mixture of sound and imagery to make the large seem small, the epic seem entrapping.

What Nolan does really well in this grand scale is to create a series of “ordinary soldier” characters. Despite the fact that we learn virtually nothing about them, these characters feel human and desperate. Again, they are such small, ordinary Everyman cogs in the giant machine of the army, that they become hugely relatable. It’s a hugely neat trick by Nolan, another brilliant inversion – just as he turns epic to claustrophobic, he turns ciphers into characters.

Recognising the need for balance between the overbearing impact of the Dunkirk beach sequences, the film allows a mix of story-telling and character types in its other two plotlines. So Mark Rylance’s boat captain voices much of the film’s humanitarianism, in a sequence that plays like a chamber piece – four people discussing duty and the impact of war in a confined space. Meanwhile Tom Hardy’s Spitfire pilot carries more of the traditional “war film” man-on-a-mission dynamics, engaging in a series of dog fights in the sky. Interweaving these stories offers not only relief to the audience, but also narrative contrast.

The interwoven storylines are also brilliantly done since they all take place in very different timespans. The plot at “the Mole” takes place over a week, “the sea” in one day, and “the sky” in one hour. Each of these timelines interlocks and unfolds in the film simultaneously, and characters move at points from one timeline to another.

Okay, writing it down, it sounds impossibly confusing and difficult to follow right? Who could keep track of all that? But the film is so brilliantly assembled that it always make perfect sense. Nolan uses several key markers – a boat, the fate of certain characters – to constantly allow us to see where we are in the story’s timeline. So we understand when we have moved from one timeline to another when we see a ship still on the beach that we’ve seen sinking elsewhere. This also increases the tension – we know at points what will happen before the characters do, because we’ve already seen the after-effects. Again, put it into words it sounds wanky and difficult to follow, but it really isn’t – and the film is put together with such confidence that it never feels the need to show off its narrative gymnastics. Nolan is confident enough to be clever without drawing our attention to it – a very difficult trick to pull off.

All this forceful story telling never prevents the story from also being at many points immensely moving and stirring. The arrival of the boats at Dunkirk is a genuine “lump in the throat” moment. The simple decency of Rylance’s boat captain gives a low-key impression of a very British sort of heroism, of quietly doing one’s duty while valuing every life and wearing your own grief lightly.

The film’s more action-based sequences are equally stirring and moving, because Nolan brilliantly establishes character with only a few brief notes. It’s made clear early on that Hardy’s pilot has only a limited fuel supply: every second he stays above Dunkirk protecting the men and ships below, he reduces his chances of getting home. It’s another sort of heroic self-sacrifice, and in a film that generally doesn’t shy away from showing the deadly consequences of war, Nolan is happy to give us some more traditional, fist-pumping heroics. 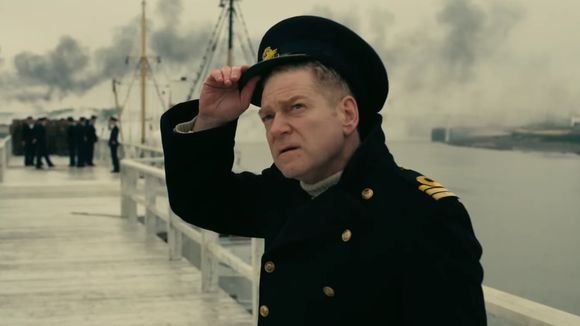 Nolan gets the maximum emotion from the more dialogue-heavy parts by hiring some terrific actors: Rylance, as mentioned is superb, and Cillian Murphy is very good as a shell shocked captain. Kenneth Branagh is perfect for conveying the weight of responsibility on the shoulders of the naval commander in charge of the evacuation. And elsewhere, Whitehead, Bernard and Styles all invest their ordinary Tommies with a great deal of emotion and empathy.

Dunkirk is a marvel of cinematic technique and accomplishment, which brings enough moral and emotional force to the drama to keep you engaged in the plights of its characters. You can marvel at the film making tour-de-force of its executions, but you never feel disengaged from it. It’s a marvellous film.
Email ThisBlogThis!Share to TwitterShare to FacebookShare to Pinterest
Labels: 2017, Aneurin Barnard, Christopher Nolan, Cillian Murphy, Fionn Whitehead, Jack Lowden, Kenneth Branagh, Mark Rylance, Tom Glynn-Carney, Tom Hardy, War film, World War Two