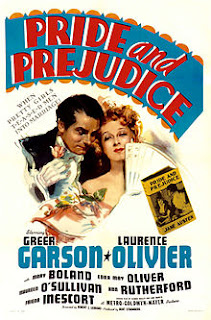 There is an expectation that old-school adaptations of literary classics from the Golden Age of Hollywood somehow set the standards of adaptation, that all others will be judged against. That may well be the case with the 1939 Wuthering Heights, among others, but it really isn’t the case with Pride and Prejudice, which is essentially a bastardisation of Austen’s original, as if the book has been humped by Gone with the Wind and we are now watching its offspring.

Do I need to tell you the plot? Well I probably should tell you this movie’s version of it. The Bennet sisters are sassy young things always on the prowl for husbands. Lizzy Bennet (Greer Garson) flirts with the proud Mr Darcy (Laurence Olivier), while her sister Jane (Maureen O’Sullivan) wins the attentions of Mr Bingley (Bruce Lester). But how will pride and prejudice affect the course of true love? Find out in this Aldous Huxley (!) scripted version of Austen’s classic, adapted via a second-rate stage version.

What’s bizarre about this film is how wrong so much of it feels. Now I’m no Austen expert, but even I could see that all the costumes for this production are completely incorrect for the period. Turns out of course that the producers just had a lot of mid-19th century clothing and thought it looked better. Other things feel like low-brow farce: the Bennet sisters and their mother race Caroline Lucas and her mother in carriages in order to be the first to greet Mr Bingley. That’s right, it’s Pride and Prejudice with a horse-drawn drag-race. Who thought that was a good idea? But what can you expect of a film with the tag-line “When Pretty Girls T-E-A-S-E-D Men into Marriage!”? It even takes good lines from the novel and inexplicably rewrites them to make them worse – Darcy’s snobbish and personally hurtful dismissal of Lizzy at the Merryton assembly “I am in no humour to give consequence to young ladies slighted by other men” here becomes “I am in no humour to give consequence to the middle classes”. Why?

That’s before you get into the casting. While some of it is pretty good (Edmund Gwenn is very good as an ineffective Mr Bennet, while Mary Boland has a neat line in shrieking as Mrs Bennet) others are downright bad – Bruce Lester is stiff as Mr Bingley, Edward Ashley Cooper is forgettably dull as Wickham, and Melville Cooper hideously overplays as a Collins who seems to have stepped in from a Marx brothers film.

Other parts just feel a bit wrong. Greer Garson and Laurence Olivier as the leads are fine actors, but neither of them produces a version of these iconic characters that feels remotely true – or even recognisable. Garson not only looks too old, but she doesn’t have the sense of playful intelligence and spark that Lizzy Bennet needs: she’s more of a slightly aloof tease. Laurence Olivier is reasonably good as Darcy, but the character is re-invented as much softer and more playful from the start, and his willingness to be teased by Lizzy early in the film makes her rejection of him make very little sense.

Their relationship has a flirtatious element throughout, fitting the film’s reimagining of the novel as a sort of romantic comedy in period costume, with elements of Hollywood screwball – but bearing no resemblance at all to the actual relationship Lizzy and Darcy ought to have. At Bingley’s garden party they engage in a playful archery competition (he assumes she’s a novice, she of course is an expert marksman). In itself the scene is good fun, but Darcy’s polite apology and willingness to look a little foolish, means it doesn’t hold together when she condemns him for arrogance. In fact, you’d be pretty hard pressed to identify much pride or prejudice going on at all. The main obstacle to their relationship is shown as Wickham’s denunciation of Darcy – but since Lizzy hasn’t actually seen Darcy do anything particularly bad, it seems particularly forced.

Furthermore, the film makes Lizzy seem like a ditzy schoolgirl, since literally one scene later she has spun on a sixpence and is devoted to Darcy. This is also a flaw of the film’s telescoping of events – within five minutes it feels Wickham elopes with Lydia, then Wickham comes into money, then Darcy reveals his true character, then Wickham and Lydia return. The film rushes through these events, in order to fly towards its artificial happy ending (all the Bennet sisters are given appropriate suitors in a clumsy final shot) without any real sense of Austen, or any real eye for the sort of subtle social satire she had carefully worked into her novels.

The film’s individualist take on Pride and Prejudice does at least distinguish it from other productions I suppose, but it’s terrified of the depths to the story or its characters, and seems to do everything it can to neuter its “bad” characters – Caroline Bingley barely appears, and it’s hard to believe that any reader of the book could picture Lady Catherine as she’s reimagined here: a sort of playful wingman to Darcy’s courtship of Lizzy.

But then this never feels like Austen – it’s got more of an early Gone with the Wind vibe to it, but played as romantic comedy. Lizzy here is an aloof, determined, slightly foolish, but strong-minded Scarlett-O’Hara-lite, while Darcy is a neutered Rhett Butler charmer. The production does everything it can to look like Gone with the Wind in its setting and design. Austen’s social commentary is phased out and replaced with low comedy and bantering lover style dialogue. I suppose as a film in itself, it’s perfectly fine, but as an adaptation of one of the greatest novels of all time, it’s sadly lacking.
Email ThisBlogThis!Share to TwitterShare to FacebookShare to Pinterest
Labels: 1940, Edmund Gwenn, Edna May Oliver, Greer Garson, Jane Austen, Laurence Olivier, Literary adaptations, Mary Boland, Maureen O'Sullivan, Robert Z. Leonard