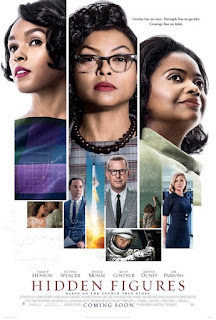 The Space Race has a certain mysticism in American culture, epitomising a time of hope, where humanity literally touched the stars. And yet, amidst all this hope and aspiration, a whole section of America’s own population was being oppressed by racial segregation and prejudice. Hidden Figures brings these two aspects together by telling the stories of some of the black women who struggled against adversity to help send a man to the moon.

Hidden Figures is the sort of film Hollywood does very well: a warm, unfussy crowd-pleaser pushing all the expected emotional buttons, presenting an inspiring “based on true events” story . The film focuses on three black women pioneers at NASA. Katherine Goble (Taraji P. Henson) is a mathematical genius and widowed mother, promoted to work as a figures checker – and struggles to gain acceptance and equality with her fellow workers. Dorothy Vaughan (Octavia Spencer) is the team leader in all but name (and pay) of a group of black female checkers, who decides to make herself invaluable as a computer expert. Mary Jackson (Janelle Monáe) works as an assistant to the engineering team, but struggles to gain the formal qualifications she needs to progress.

Truth be told, it isn’t anything special – it knows how to serve up its moments in an affecting way, but it’s filmed with a workmanlike flatness. Its structure and events are predictable – the standard arc of adversity, struggle, acceptance and triumph. But it’s still affecting for all that, and well made. It becomes a decent feel-good movie, and manages to never succumb to overt seriousness or heavy handed self-importance: it keeps the tone pretty light.

It’s a film about racial and sexual discrimination, but it avoids introducing an actual villain. The real opponent is “the way things are” – no single white character is particularly racist or unpleasant, just used to the system being what it is and, feeling only the benefits of it, feel no obligation to change it. It’s not just the white characters either – even Ali’s Colonel Johnson struggles to believe Katherine works at NASA as a mathematician, and this everyday sexism is as much a barrier to the women as race.

Melfi astutely picks a handful of key moments to showcase discrimination: from little moments like Goble being handed a bin to empty when she arrives on her first day, to the careful hierarchical games played as Dorothy addresses Kirstin Dunst’s supervisor as “Miss Mitchell”, while always being called “Dorothy” in return. This sits alongside more overt moments: Hidden Figures probably has a claim to fame as being the only film to feature a toilet trip as its dramatic highlight – Gobley having to run over 15 minutes across the campus to use the “Coloured Women’s” bathroom, a situation only resolved by the intervention of her grizzled boss (an effective Kevin Costner). The design also works well to help visually make the woman stand out as different in the sea of white NASA men around them.

If the characters do fall into a standard pattern (the quiet professional one, the motherly one, the firebrand), the acting is still extremely good. Henson is terrific as the quiet anchor of the film – it’s particularly admirable as the role largely isn’t showy or flashy. But she brings a quiet, assured professionalism, making Goble a woman who knuckles down and gets on with it, whose quiet assurance wins eventual respect. The love story between her and Ali’s Colonel Johnson is also very sweet. Spencer is very good as Vaughan, particularly the way she suggests resentment just below the surface of her motherly exterior. Monáe has the least interesting role, but her bolshiness serves as a nice contrast to the other leads.

The tricky thing when a film purports to be a piece of history, is when you find out much of what you watched didn’t actually happen. The racial segregation we see so prevalent in NASA just wasn’t quite the case in real life. The obstacles and barriers placed before our heroines largely didn’t happen. Even segregated bathrooms (a key motif in the film) were not an issue at NASA. Many of the events we see didn’t happen – or not like this – and the vast majority of the supporting characters are composite inventions. After investing in the struggles of the three characters, it’s easy to feel that the revelation that it was (almost) all made-up has cheapened the impact of the story.

However, what is true is: even if NASA wasn’t as bad as this, most of the rest of America was. So even if this film makes working in NASA look a lot worse in the 1960s than it in fact was, it does feel very true if taken as a general impression of what life in America was like back then for black Americans. So although the film has to brush up and embellish things that actually happened, it does feel very true to the general experience of being both black and a woman in the 1960s. All of which is a way of giving the film a bit of a pass for its inaccuracy. It might be gilding the lily of the struggles these women had in NASA, but it is certainly a real impression of what black women experienced in America at the time - in fact the reality was almost certainly worse.

Hidden Figures is a charming enough film, even though it’s a pretty predictable and unsurprising one. It pushes all the Hollywood buttons you would expect with confidence, and while its story arcs don’t deviate much from the “inspiring movie” template, they do work very well. Its historical accuracy is ropey, but it does feel like it gives a very good sense of the attitudes of the time – capturing both the almost atmosphere of hope in 1960s America, and also the everyday horrors of segregation and racial oppression. It also has some terrific performances. It may be a safe, crowd-pleaser of a film – but it does please the crowds well.
Email ThisBlogThis!Share to TwitterShare to FacebookShare to Pinterest
Labels: 2016, Biography, Janelle Monáe, Jim Parsons, Kevin Costner, Kirsten Dunst, Mahershala Ali, Octavia Spencer, Space programme, Taraji P. Henson, Theodore Melfi