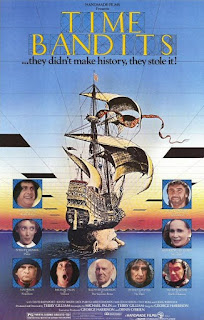 After leaving Monty Python, each Python went their own way. Terry Gilliam had been the slightly odd one, the eccentric animator who played the weirdos at the edge of the frame. Time Bandits would be pivotal in repositioning him as an ambitious, visionary director with a striking visual sense. It would also allow him (and co-writer Michael Palin) to create a fairytale fable with something for all ages, a film about a child’s view of the world which adults could embrace.

Kevin (Craig Warnock) is a dreamer, a young kid adrift in his parent’s materialistic world. Until one night a gang of dwarves calling themselves “Time Bandits” emerge out of his bedroom cupboard. They have a map that allows them to travel through time and use it to commit crimes and then escape to different centuries. Kevin joins them in their adventures, but none of them know they have attracted the attention of the Evil Genius (David Warner) who wants to use the map to escape his prison and recreate the world in his own image.

I still remember watching this film when I was younger and really enjoying (I must have watched it dozens of times). I have to say it holds up extremely well. Sure Craig Warnock isn’t the most inspired child actor of all time, but he has a wide eyed innocence and enthusiasm that anchors the film really well. Gilliam’s direction is brilliantly good – wild and inventive, like a punk-rock fairytale. The dwarfs make an inspired grouping, each embracing the once-in-a-lifetime chance of playing leading roles.

The main reason for the film’s success is Gilliam. His work is extraordinarily detailed and imaginative, while his visual sense makes shots that cost hundreds of pounds look like millions. Huge swathes of the film are shot with a low-angle lens that allows us to see everything from the perspective of our heroes, and also makes each of these larger-than-life events seem even more awe-inspiring. The design of the film is extraordinary, with striking images confronting you at every turn, either a recreation of events or the bizarre visuals of the “time of wonder”. 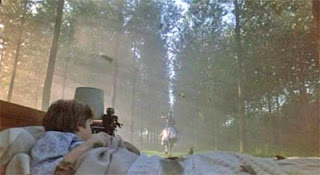 And those visuals are outstanding. Can you think of any other film where a knight on horseback bursts out of a bedroom cupboard, charges around the room in medium shot, and then gallops off through a field that has suddenly replaced the bedroom wall? How about an ogre who lives on a ship that is then revealed to be a hat for a giant who lives underwater? Evil’s Fortress is a swaggeringly brilliant triumph of production design, while his goat skulled, tall, hooded monsters must surely have been playing in JK Rowling’s mind when she came up with the Dementors.

The design also echoes the possibility that this is all a child’s fantasy. A careful look at Kevin’s bedroom shows pictures of everything we encounter. The final confrontation with Evil takes place on a set clearly inspired by the Lego bricks, chess board and toys that litter Kevin’s bedroom.

The playful tone is also reflected in its lampooning of the “adult” world of technology for its dull materialism: Kevin’s parents watch a bullying gameshow (compered by a demonic Jim Broadbent) while sitting on armchairs still in their plastic wrapping. Evil’s obsessions all revolve around lasers and the microchip.

Away from all this, the film has a simple structure. It’s basically a series of really rather fun historical sketches, linked together by an engaging fantasy narrative. These scenes attracted guest star performers, all of whom excel (though it is odd to see them get top billing – Cleese is on screen for about three minutes, but gets top-billing!).

The guest stars are terrific – Holm is hilarious as a chippy, height-obsessed Napoleon; Cleese very funny as a visiting-Royal-inspired Robin Hood, treating all around him with condescension; Ralph Richardson brings an absent-minded imperiousness and dry wit to his role as God; Connery sprinkles a touch of movie-star bravado as a kindly, gentle Agamemnon (the uncommented on joke being the movie’s ideal father figure is most famous for sacrificing his daughter…). 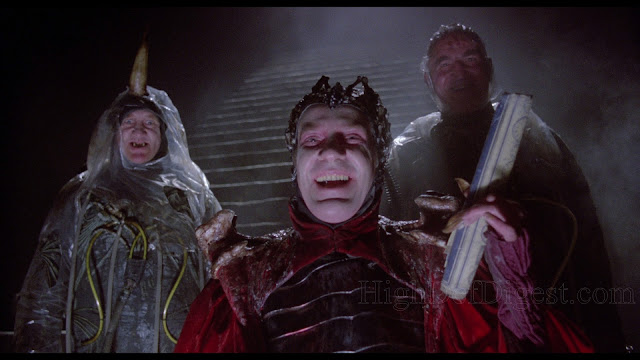 If any performer high-jacks the film it’s David Warner as a dry-witted, viciously ego-maniacal Evil Being, getting most of the best lines. A sequence where he obliterates several underlings for minor transgressions hums with dark humour (and punchlines with the accidental obliteration of another minion off screen, met with a sheepish “Sorry”). On top of that, Warner brings just the right level of sinister child’s-nightmareish quality to the role, helped by a striking costume design that makes him look the love-child of a crocodile and a car engine.

The leads of the film (Kevin and the bandits) are extremely well drawn by Palin’s script, each of them with sharply distinctive personalities. David Rappaport (allegedly incredibly unpopular with the others due to his haughty disregard for them) is perfect as the arrogant self-appointed leader, but Jack Purvis is a stand-out as the warmly brave Wally. More than a few commentators have pointed out that the Bandits all serve as representatives of the members of the Monty Python troop, which adds another level of fun watching the film.

Time Bandits is electric good fun. I have no doubt I might find more to criticise without the memory of enjoying it so much when I was younger. Some of the sketches work less well than others – the scene with the ogre doesn’t quite work, and the ending, twistedly funny as it is, does feel slightly abrupt is. But the film never outstays its welcome, and it’s put together with such glee and accomplishment that there is always a line or an image that sticks with you. It’s a dark fairytale for children of all ages – and making something the whole family can enjoy is really quite a feat. Palin and Gilliam would have put together a sensational series of Doctor Who.
Email ThisBlogThis!Share to TwitterShare to FacebookShare to Pinterest
Labels: 1981, David Warner, Fantasy, Ian Holm, Jim Broadbent, John Cleese, Michael Palin, Sean Connery, Terry Gilliam