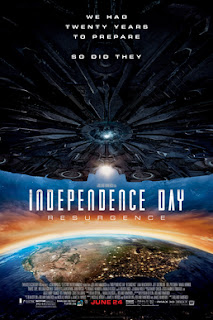 Sometimes your first instincts in films are great. They help you to try new things and unearth new favourites that can find a place in your heart. And sometimes your first instincts are bollocks. You see a film and, for whatever reason, you were in the right mood and you think “well that was great!” Then you come back to watch it a few months later and your second reaction is “What the hell was I thinking?”. Such a film was Independence Day: Resurgence for me.

The plot is alarmingly simple. Probably because it’s essentially the same plot as the first film. Twenty years after the events of Independence Day, mankind lives in peace and prosperity and has rebuilt the world, with a new global military armed with alien technology ready to repel any future attacks. Of course the attack comes… Soon mankind is on a ticking clock (“We were wrong. We only have 1 hour left to save the world!”)...

Okay. I did enjoy this in the cinema. I confess. Then I watched it again and released it was complete bollocks. Totally pointless sequel that adds literally nothing to the first film.

First off this film is essentially a remake rather than a sequel. A first alien ship (different species) arrives and there is panic. An attempt at communication rebuffed (theirs not ours this time). Warnings about an imminent attack are ignored. The aliens destroys several cities (mankind has been busy, as many of the landmarks destroyed in the first film have been reconstructed in perfect detail to get mashed again). A human counterattack ends in dismal failure. Even the goddamn ending of the film is once again a final battle at the salt flats, with the clock ticking. One of our heroes sacrifices themselves. It’s the Fourth of July – need I go on?

The only things that they haven’t carried across are the charm and thrills of the original. In fact there is nothing here to interest anyone who doesn’t have fond memories of the first film: the new characters are largely forgettable, most of the sequences are commentaries on the first film. Resurgence captures none of the twisted sense of awe and wonder of the original Independence Day – the shock of seeing aliens arrive, the terror they unleash, the helplessness of mankind. The action sequences (particularly the assault on the alien spaceship) have none of the sense of danger that makes the same sequences in the original so exciting – it just makes you want to re-watch the first film but not in a good way.

Instead the film aims BIG. Everything is BIGGER. Mankind has planes that fly in space, ray guns and moon bases. The aliens have a ship that’s not the size of city, but the size of a continent! Half the world is wiped out in minutes! The alien attack all takes place in one day! We’ve only got one hour to save the world from having its core drained! It’s all pushing to make the film more EXCITING! It fails. Not only is everything familiar, but everything is so rushed that there are none of the moments for reflection the first film has. Half the world is wiped out in this film and no-one takes even a minute to think about the impact of that.

It’s not just content from the last film that is familiar. This film reveals the aliens are a sort of hive mind with – you guessed it – a Queen. Is it essential for every single bloody alien film to have a queen? Ever since Aliens the idea has been done to absolute death. Needless to say, our heroes (having seen films before) work out that if they take down the Queen, all the other aliens will shut down. Familiar? Only to everyone who has ever seen a film before.

The film’s sexual politics are also all over the shop. It proudly boasted in advance it would feature a gay relationship. But the gay couple in this are safely sexless: not a single line of dialogue hints too heavily at their homosexuality and the closest they get to showing physical affection is to hold hands briefly (the point being of course, if they were too gay it wouldn’t sell abroad).

Secondly, and even more uncomfortably, at some point it was clearly decided a cross-racial relationship wouldn’t play well either. It would make sense to me if the two children from the first film had grown into love interests for each other – and if they were both white I am certain this would have happened. But this film introduces a whole new (white) suitor for Whitmore’s daughter. Hiller’s adopted son? No love interest for him at all. In fact Dylan is relegated to the role of the charisma-free straight-shooter, with Liam Hemsworth given the coveted role of the charismatic maverick who has the courage to think outside of the box and save us all. This is even more cowardly than the film’s shyness around its gay characters.

Independence Day: Resurgence is a lifeless film. It has just enough fun about it for those who remember the first film to watch it with a sense of nostalgic glee. But it has none of that film’s wit, none of its tension, none of its sense of mankind overcoming impossible odds. Despite all the hand-waving towards the unity of the world, even more than the first film this might as well be “America Vs. Aliens”. It caught me in a good mood at the cinema, with the right nostalgic mindset. But whereas Jurassic World (for instance) mixes nostalgia with genuine wit and excitement, this is a film that never comes to life. It’s DOA. Far from a resurgence, it’s a wake.