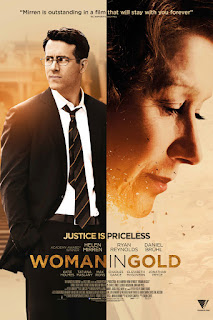 The Nazi regime across Europe was a criminal one in every sense of the word. Along with the hideous acts of murder and warmongering, Woman in Gold uses its story to remind us their leaders were also little better than common thieves.

Maria Altmann was a young Jewish woman from a wealthy family, living in Vienna in the 1930s. She escaped from Austria to the US in 1939 with her husband, but had to leave the rest of her family behind. Their fine possessions, including several paintings by Klimt, were stolen by the Nazis.

Decades later, Maria (Helen Mirren) recruits struggling lawyer Randy Schoenberg (Ryan Reynolds) to help her reclaim the paintings, now owned by the Austrian government. The government are predictably dismissive of any claims on their heritage, and are particularly unwilling to give up Klimt’s Portrait of Adele Bloch-Bauer (or Woman in Gold), a portrait of Altmann’s aunt, proudly displayed as a jewel of Austrian culture. So begins a case that will go, via the American supreme court, to the very heart of Austria’s uncomfortable relationship with its past. In parallel, Maria remembers her younger self (Tatiana Maslany) and her escape from Vienna.

I think it’s fair to say Maria is a role Helen Mirren could play standing on her head. It’s a cliché – the feisty, imperious elderly woman who cows all around her, but has a heart of (forgive me) gold. Ryan Reynolds Schoenberg is similarly predictably: a young, naïve, slightly bumbling do-gooder revealed to have hidden depths of strength, and ends up connecting with his own heritage in a “very personal” journey. In fact, every character in the “present day” plotline is a hopeless cliché. Katie Holmes has perhaps the worst role as Schoenberg’s wife – as The Wife always does in these things, she spends the first half of the film asking her husband to drop his time-consuming crusade, but come the second half she’s making the inevitable “you’ve come too far to give up now” speech.

Every bit of the modern day story is predictable, reheated slop from other, much better movies – you literally recognise every beat of every courtroom scene. Most conversations are essentially the actors spooling plot at each other, explaining everything from art history to Austrian mediation procedures. The moments where the dialogue allows the actors to focus on character land with a hamfisted heaviness, with all the subtly of Oscar “for your consideration” scenes.

Periodically the story abandons logical evolution altogether and leaps from A to B without explanation: Maria will never go back to Vienna, less than five minutes of screentime later oh no actually she will (explained by a timely, on-the-nose flashback), no she definitely won’t go back a second time, ta-da there she is. She wants to fight, then she wants to give up, then she wants to fight again. Whether these events were real or not, the film makes them feel like humdrum screenplay hokum.

You keep waiting for this to spring to life and do something fresh, but it never does. Even its odd-couple pairing is essentially Philomena reheated – but without the wit and warmth of that film’s script. It manages to turn what should have been an interesting story into something drier and duller than a documentary would have been.

The film takes wing a little more in the flashbacks to the 1930s. Again, there’s nothing new here, but the performances in are infused with a warmth, emotion and humanity missing from the other storyline – Allan Corduner is particularly good as Maria’s loving father. The sense of peril from the Nazis also gives the film a clear and unequivocal antagonist: the sequence where Maria and her husband flee Vienna is more engaging and tense than anything else in the film.

The weight of these flashbacks, however, only serves to contrast poorly with the strange, odd-couple comedy of the rest of the film. It’s literally two different films sitting uncomfortably together, neither doing either any service.

Woman in Gold is a confused film, that drags down what could have been a fascinating story into a safe, Sunday-afternoon film that never wants to say anything too controversial (even its potshots at the Austrians for overlooking their Nazi past is balanced by “good” Austrians). It reduces its characters to plot-spouting clichés, wrapped in a dry story. Although its flashback scenes carry some emotional heft, they can’t save the main plotline which spirals on and on, never engaging the viewer’s interest. It’s not gold, it’s very base metal.
Email ThisBlogThis!Share to TwitterShare to FacebookShare to Pinterest
Labels: 2015, Biography, Charles Dance, Courtroom drama, Daniel Brühl, Elizabeth McGovern, Helen Mirren, Jonathan Pryce, Katie Holmes, Max Irons, Ryan Reynolds, Tatiana Maslany