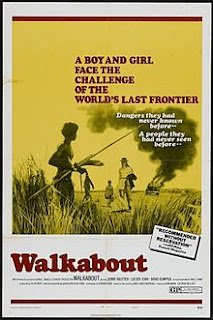 Some films are hard to read. Others delve gently into ideas so complex and obscure that they need patient attention to follow. And other films are so elliptical and enigmatic they almost defy understanding. Walkabout is such a film. What is it about? You could almost say “everything and nothing”.

The surface story is strikingly simple. A 17-year-old girl (Jenny Agutter) and her much younger brother (Luc Roeg, the director’s son) are stranded in the Australian outback after their disturbed father first attempts to kill them (perhaps?) and then sets their car on fire and shoots himself. Quickly lost, with no idea how to get back to civilisation, they meet a young Aboriginal boy (David Gulpilil) on Walkabout. He saves them and agrees to guide them back to civilisation (perhaps?). But how far can cultural understanding go?

The story Roeg is telling underneath this bare-bones plot, though, is intriguing and troubling. Roeg uses the setting to explore the complex interrelationship between Western civilisation and the native civilisations it has displaced in many parts of the world. It’s also about ageing, sexual awakenings and the barriers (some of which we place ourselves) that prevent communication. This is all set in Roeg’s stunningly photographed, dreamlike representation of the Australian outback which is part surreal combination of cross-cuts and editing, part dark nature documentary.

It’s a haunting film where it’s never clear exactly what is happening, or what each of the characters is aiming to do ( “I don’t know” is a common refrain heard in the film). From the start, there is clearly something wrong with the Father in some way (with dark suggestions that he has too great an interest in his daughter’s burgeoning sexuality), but why does he turn partly homicidal (he puts little effort into pursuing his children) and then suicidal? The film gives no real clue.

This confusion about motives continues through the film. Does the Aboriginal boy really understand (or intend) the need to deliver the siblings back to civilisation? At one point he walks up a hill, is talked at by a white woman from a nearby settlement, then returns giving no indication he has discovered what they are searching for. Later he does the same after finding a road. Does he want to help? Or is he unwilling to let go of the spiritual closeness he can feel between the three of them?

Similarly, Agutter’s character undergoes a spiritual experience so profound, and yet so unsettling to her carefully conventional upbringing, she seems unable to process it. In the company of the Aboriginal boy we see her begin to relax and lose some of her carefully guarded inhibitions (this culminates in a famous naked swimming scene, which got the film in plenty of trouble in 2003 when the Age of Consent was raised to 18). But at the same time, she is never really able to communicate with the Aboriginal boy.

Her attempts to do so are almost laughably incompetent. While her younger brother develops a natural rapport using sign language, she is hopelessly wedded to verbal communication (she doesn’t even think to mime drinking when asking for water). In the outback, she clings far longer than the boy does to the accoutrements of civilisation in clothing and their radio. While she does relax, only at rare moments do we feel her humbled by the land around her. Their first moments together can be seen in the video.

Only for the briefest of brief moments, in an abandoned hut, do they meet briefly as equals – a silent moment of eyes meeting and a brief understanding of shared affection. It is shattered by her complete rejection shortly afterwards of the Aboriginal boy’s courtship dance – scared and confused (as much by her own obvious interest earlier), she pointedly ignores the dance, leaving the boy outside all night. The next day she and her brother are dressed in their school uniforms, as if nothing has happened.

Roeg’s final nihilistic observations – we may at points come closer together as a species, but we will only rarely ever be able to overcome the barriers we have created between ourselves. We may develop an immediate bond with people in extreme circumstances, but the closer we get to “normality” the quicker we reject those bonds and revert back to our ingrained behaviours.

This is all fascinating and deeply engrossing stuff – and it’s the sort of material you can reflect on over and over again. Roeg mixes this in with plenty of dark comparisons between our soulless modern world and the “savage” world of the Aboriginals – a comparison never flattering to the modern world. Roeg uses intercutting to point these up, particularly between the hunting of the Aboriginal boy, his respectful killing of a kangaroo, and our own mechanical slaughter and processing of meat. Now to be honest these sort of cutbacks are thuddingly dated and heavy-handed – the sort of holier-than-thou opinion making that quickly gets on the nerves.

A few of these sequences do work well. Near the end, the Aboriginal boy hunts when he is nearly crushed by a truck carrying two modern hunters. The truck skids to a halt and the hunters gun down several animals (the rather tiresome editing uses a series of still shots, crash zooms and distorted sounds) while the Aborigine looks on with confusion and disdain. In another sequence, the white woman the Aborigine met heads back to a settlement, where white men seem to be exploiting Aboriginal labour. She sits sadly on the bed staring into the distance. Moments like this, despite the often dated editorial tricks, do carry a real sense of the divide between two cultures.

Other sections of the film make similar points about the wildness of both the outback and the city world, but with increasingly dated and tired visual tricks – do we really need an umpteenth shot of maggots eating a corpse? Or more quiet pans along cold 1970s commercial surfaces? This is a shame, as the photography is beautiful. Roeg has an eye for a brilliant image – his shots of the Australian outback are some of the best use of sun and desert on film since Lawrence of Arabia. The film’s shots of the desert are simply stunning, with Roeg’s hypnotic series of images guaranteed to not only haunt your mind, but also to show an angle on the world you won’t have seen before.

Walkabout may be slightly dated in some of its production and editing techniques, but it’s a deeply thoughtful, unsettling work that asks profound and difficult questions about civilisation, life and death – the sort of film that rewards revisiting and reinterpretation. While many parts of it clunk in places, or have a distinct 1970s flashiness in their filmmaking, when it moves away from these rather clumsy ideas to deal with concepts that are more spiritual and intriguing, it’s a fascinating film.
Email ThisBlogThis!Share to TwitterShare to FacebookShare to Pinterest
Labels: 1971, Australian films, British Films, Jenny Agutter, Nicolas Roeg