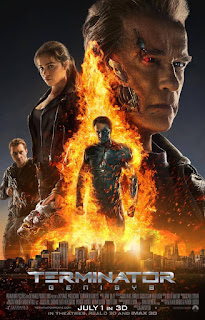 Every few years, Hollywood convinces itself the Terminator franchise is a licence to print money just waiting for exploitation. Since the late 90s, three movies and one TV series have attempted to relaunch the franchise. Each has underperformed, and left plans for sequels abandoned. Terminator: Genisys is the latest in this trend, the first in a planned trilogy that will never be made. As such, it’s a type of curiosity, a film that sets up a new timeline and introduces mysteries never to be answered.

Once again, the film starts with John Connor (Jason Clarke) sending Kyle Reece (Jai Courtenay) back in time to save his mother Sarah (Emilia Clarke) from deadly Terminators sent to destroy her and prevent Connor from being born. But when Reece arrives, he finds the past he was expecting altered and that Sarah was already saved years before from a first Terminator, by a re-programmed one nicknamed Pops (Arnold Schwarzenegger). Our heroes find themselves adrift in a timeline dramatically altered from the one they expected, and transport themselves to 2017 to combat Skynet once more.

It says a lot that the most original and daring thing about this movie is that no-one at any point says “Hasta La Vista, Baby”. Aside from that, the film is a Frankenstein’s monster, assembled from the off-cuts of previous franchise entries. The familiar lines are trotted out once more: I’ll Be Back, Come With Me if You Want to Live, Get Out and many more. The structure of the film limply settles into the same basic set-up we’ve seen since Terminator 2, while the big set pieces have an air of inevitability about them. This is a lazy, half-baked claim to re-invent the franchise that essentially copies and repeats everything from previous films with only a few small changes of angle. You can admire briefly the skill that has re-created moments from the original film, and be impressed by the effects that show a newly-young Schwarzenegger fighting his grizzled future self – but it will largely just make you want to watch the first film again.

This stench of familiarity is despite the huge, seemingly-inventive loopholes that the film, Bourne Legacy like,jumps through in order to try and justify its existence. The Terminator franchise has become so scrambled with alternative timelines, paths not taken, and film series cancelled that it spends almost the first hour carefully recreating events from previous movies, with some major tweaks and changes to allow a new “timeline” to burst up and act as a jumping off point for this movie. By the time the complex timeline politics has been put in place, the film has barely an hour of its run time left – at which point it needs to introduce its two antagonists and give our heroes a mission. The timeline is truncated, the villain is under-developed and the mission the dullest retread of the plot of Terminator 2 possible: a race to get to a building to blow it up. Yawn.

Is it any wonder that people shrugged at this movie? Even it can’t imagine a world outside the confines of its franchise rules. It reminds you what a small world the Terminator universe is. There’s little more than 3-4 characters, Skynet is always the adversary, time travel always seems to involve variations on the same people, the future is always the same blasted wasteland. The films always degenerate into long chases, compromised by our heroes’ attempts to change the future. So many Arnie Terminators have been reprogrammed by the resistance now, you wonder if any of them are left fighting for Skynet. What seemed fresh and daring in the first two films, now feels constrained and predictable. To find life in this franchise, it needs to do something genuinely different, not go over the same old ground over and over again.

The tragedy of this film is that the one unique thing it had – the identity of its main villain – was blown in the trailer of the film. Taylor was apparently furious at this undermining of a twist his film takes time building up. It ought to have been a shock for audiences to find out the franchise’s saviour-figure, John Connor, was instead the film’s villain – instead anyone who’d seen a trailer knew all about it before the opening credits even rolled. They even put it on the flipping poster! On top of which, the trailer carefully checks off all the major set pieces up to the final  30 minutes. Is it any wonder so many people gave it a miss at the cinema? Shocks left unspoiled, such as Matt Smith (strangely billed as Matthew Smith) revealed to be the embodiment of Skynet, are so dull and predictable they hardly counted as twists.

There is little in there to bolster the plot. The action is shot with a dull efficiency. The film is edited together with a plodding mundanity. Schwarzenegger once again goes through the familiar motions, but surely we have now seen enough of this character, which could in fact be holding the franchise back. Emilia Clarke looks bored, Jai Courtenay (an actor who came to prominence with a warm and intelligent performance in Spartacus: Blood and Sand) is again cast as a charisma free lunkhead, with attempts to add shading to his character only adding dullness. Jason Clarke lacks the charisma for the cursed role of John Connor (every film has seen a new actor take on the role).

Reviews claimed the plot was too complex for the audience: not the case. The plot is clear enough – it’s just dull and engaging. It never gives the viewer a reason to invest in the story. Terminator: Genysis is a ploddingly safe, predictable and routine piece of film-making, from a franchise that desperately needed reinvention. But so long as average and uninventive filmmakers – Jonathan Mostow, McG, Alan Taylor – are entrusted with its future, it will always be a franchise with no future. It’s time it was terminated. Hasta La Vista, Baby.
Email ThisBlogThis!Share to TwitterShare to FacebookShare to Pinterest
Labels: 2015, Alan Taylor, Arnold Schwarzenegger, Box office bombs, Courtenay B Vance, Emilia Clarke, Jai Courtenay, Jason Clarke, JK Simmons, Matt Smith, Science fiction, Terminator